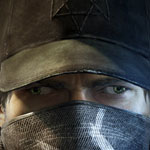 Woo, all right! Two reviews in one year? I’m on a ROLL! Better ride this wave of reviews all the way to the Scathing Accuracy Awards 2014! I’ma give myself the award for increasing my productivity by 200%. I earned it.

Watch_Dogs huh. Safe to say I wasn’t expecting much, since it’s made by Ubisoft, who are just as awful as EA when it comes to… well, everything. I mean honestly, these companies fucking suck. Not to sound like a hippie but big companies suck in general, because they all just wanna fuck you as much as they can and sell you less for more. Which means their games tend to lack substance and merely have a thick veneer of flashiness and a huge marketing budget to make everyone think they’re the next big thing when really it’s just “Here’s Assassin’s Creed again, only this time his coat is a different color! Doesn’t that make you wanna shit right in your dad’s mouth?! $79.99 special edition with alternate slightly darker coat color! RIGHT in his mouth!” 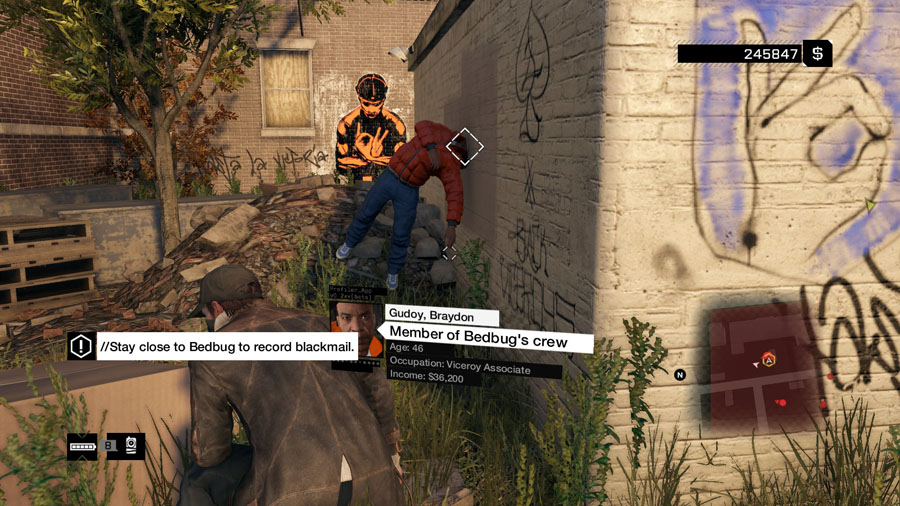 So as you might have guessed, thanks to the Ubisoft logo on the box, my expectations going into Watch_Dogs weren’t high. But I live in Chicago these days, and since Watch_Dogs is set there and I had heard it was a lovingly crafted and painstakingly detailed rendition of the homicide capital of the US (fuck you Honduras, we’re coming for your world record), I wanted to check it out and see if it did the city justice. Otherwise I would not have given even a single fuck about this game. And yeah that’s a really superficial and dumb reason for me to drop fat stacks on a game. But whatever, I was bored and didn’t have much else going on.

My first impressions were marred right off the bat by the awful performance the PC version of the game suffered from at release. And my PC was pretty solid. It ran literally everything else on maximum settings until Watch_Dogs came along, with its slideshow framerates. And that’s not an exaggeration, it was just bad. In some cases, I’m talking less than one frame per second. Cutscenes would just skip vast chunks at a time and then leave me staring at a frozen picture for thirty seconds. I’d be lucky if I saw some subtitles every now and then. But this is what happens with PCs. You get a good computer, and it’s great for a few years, and then devs push the envelope and you gotta step up your hardware. I mean, the reason I have a PC is so that I can crank stuff up to the max, push some limits, see what a game can really do. And while ultimately the overall experience won’t be much different from playing on a console, playing a game on 30fps on PS3 and then playing the same game on 60fps on PC is like taking a rainbow cumshot directly to the eyes from Laser Jesus. That’s a good thing, in case that wasn’t abundantly clear. 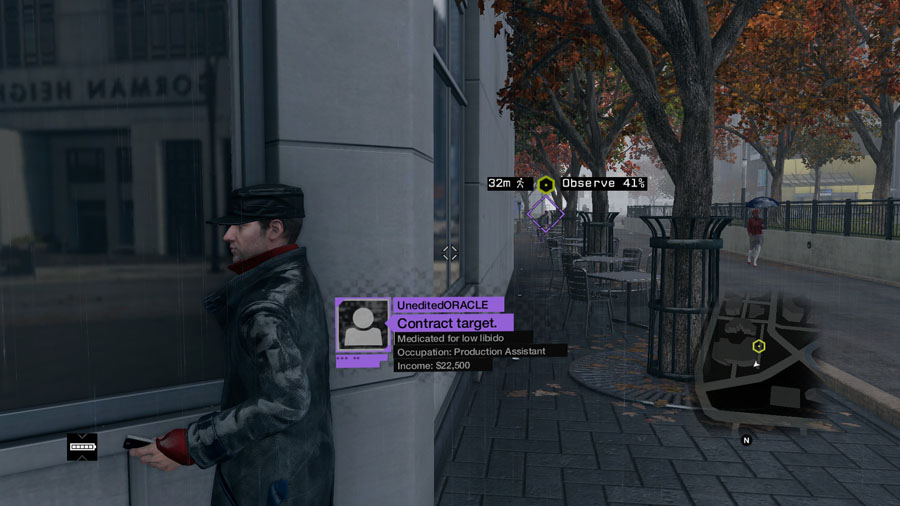 But anyway, after some tweaks and upgrades, Watch_Dogs was running fine on my PC, which is now future proofed for maybe another few years, until some developer fucks me again. So now that the performance issues were resolved I was able to play the game properly, and I guess my thoughts are that it’s… alright. Like I said earlier, it’s essentially just Assassin’s Creed Modern Day Chicago edition, in case you couldn’t tell just by using the eyes in your face. It’s pretty typical third person shooter/action. And by typical I mean to say that it’s not Gears of War, so the combat is mediocre and the movement is merely average. It’s playable, but you won’t find yourself feeling impressed by the smoothness at which you took cover and pulled off a series of kills or something. If you’ve played any generic TPS, you already know how it feels. It also has driving, which frankly isn’t good at all. The vehicles don’t feel satisfying to drive, and the differing performance and speed of certain vehicles doesn’t really make any difference in the long run. Come on, people. It’s 2014. I refuse to believe a company as big and rich as Ubisoft can’t handle acceptable driving in a *cough* “Triple A” title. The vehicles were so underwhelming that I actually walked almost everywhere in the game, and this is a pretty sizable game to hoof it through. Although I did appreciate the motorbikes. At least the oldschool, hog-type motorbikes. That’s my shit right there.

So yeah. Combat, passable but nothing special. Driving, pretty disappointing. What next? I guess I can talk about the cast of characters a little. The protagonist should be very relatable to most of today’s teenage males, so that’s just good business sense by Ubisoft. They know their demographic. Self-righteous, mad at the world that they know nothing about, wish they were badass anti-heroes, you know the score. Aidan Pearce embodies that stuff pretty well. He’s a hacker who takes it upon himself to become the hero Chicago needs and does so by hacking all of the city’s technology, from the cell phones of everyday citizens, or the security cameras of local businesses, or cars, or the L train, or ATMs, and so on. Other characters? None worth mentioning. 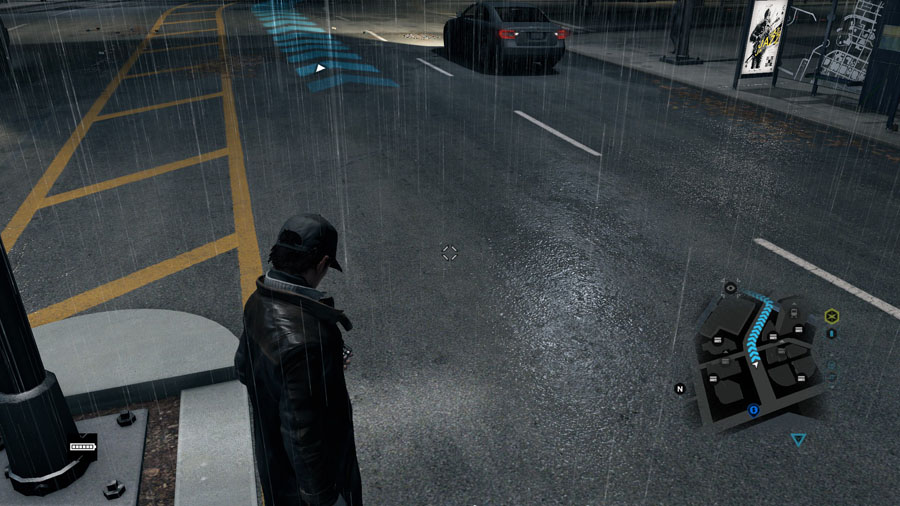 As for the hacking, it’s a neat concept, but in practice the hacking features in the game left me wanting more. It’s all done with a single button touch. Everything hackable is highlighted, and all you have to do is look at it and press one button to take control over it. While the results can be entertaining, it’s never really satisfying and it doesn’t feel rewarding. You’re just like “Hey I wanna look through that camera,” and then you look through the camera. But on the other side of the same coin, I’m not sure how I would go about improving it. I don’t wanna play some minigame every time I want to hack something in the heat of the moment, because that would destroy the pace and intensity of whatever was going on at the time, be it combat, or stalking someone, or driving, or whatever. So I can understand why it is the way it is. The game’s premise is that you can hack anything, anywhere, at any time. The hacking is simplified because there’s not really any other way to actualize that premise without entirely changing the premise itself and turning the game into “Hack select things, with a little difficulty, in some places, at certain times.” And while that might have resulted in ultimately more rewarding gameplay, it probably wouldn’t be possible to tell the same story in the same setting. Just one of those trade-offs between concept and product, I guess. But if you have a concept that can’t be fully realized in a satisfying way, maybe you don’t have a strong concept in the first place and should just do something else.

Speaking of the setting (pretty much only reason I got the game), it’s probably the aspect of Watch_Dogs that I found most impressive. I wasn’t expecting some flawlessly accurate rendition of Chicago (because that wouldn’t be possible) but the in-game second city did a really good job of capturing the look and feel of its real-world counterpart. There are a few noticeable landmarks, such as the Sears Tower (Willis, whatever), and a few art installations like The Bean, as well as a handful of recognizable skyscrapers. There’s even a correctional facility building which is just down the street from where I work in real life, so it’s cool to see those things. But mostly, it just really feels like Chicago. I’ll be walking down a street and suddenly I’m havin’ a moment, all like “Wait, is this La Salle I’m on right now? These buildings look the same, and this intersection is familiar.” Of course it’s not the actual street, but they did a good job of capturing the style, so they get props for that. 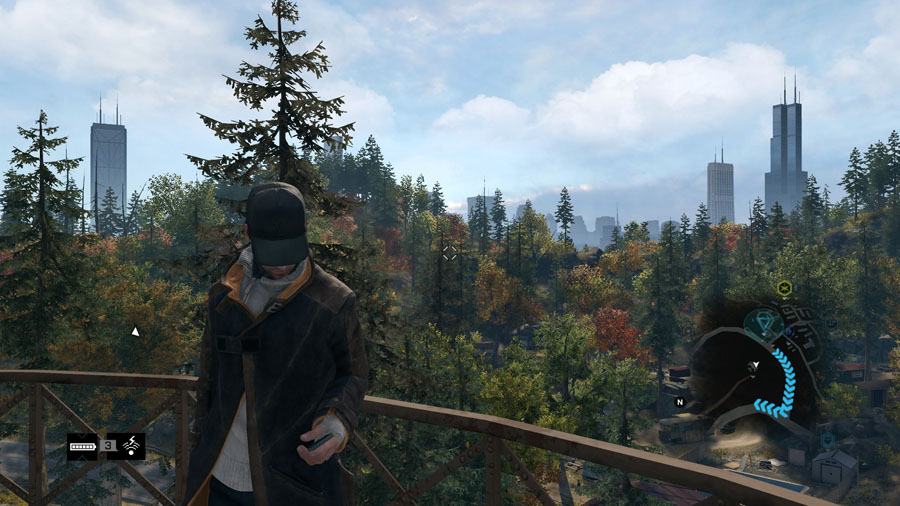 Oh, and the game also had some pretty cool alternate reality modes. My favorite one involved the entire city being deserted, cars all abandoned in the streets like some 28 Days Later shit, and there’s nobody around. When you enter certain areas of the city though, there are people with security cameras for heads that you have to avoid if possible and reach a transmitter and shut it down to reclaim that section. And the entire city was playable in this game type, so I spent two or three hours going through the entire game mode in one sitting because I actually enjoyed it a lot.

At the end of the day though, I don’t think highly of this game, largely due to my extreme dislike of the business model used by juggernaut companies like Ubisoft. There’s no passion in the games they put out. They aren’t labors of love. I know they’re a business and they need to make money, but for fuck’s sake, can’t you at least care about what you do? At the risk of sounding like an aging hippie cunt again, the business model of “Create something on a tight budget, and then throw 75% of that budget into marketing to make people want it” is just BAD. What you create in that situation is a mediocre product that won’t leave any lasting impression on people. These are videogames, not Beats By Dre. 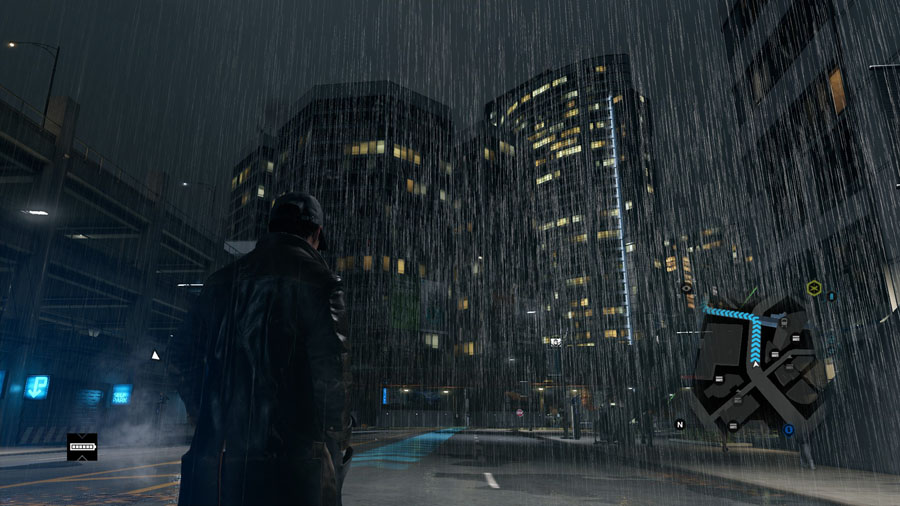 You know what leaves a lasting impression on me? When someone creates something because they want to make it. They have an idea in their head about a game that would be really fun to play, something that they want to play themselves, and then they devote their time and resources to it and it becomes something memorable. Modern big-name games are almost never that. They’re designed by committee, built to a strict budget and surrounded by red tape, and any sense of vision or direction is lost. The only vision is to make a lot of money, and it really comes across in the final product.