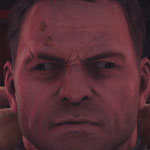 For fucking YEARS I’ve been wishing for a game that’s basically Gears of War but set in the Warhammer 40k universe and lets you play the part of a Space Marine. YEARS. Seriously. Finally my wish came true. Sort of. Like one of those cursed wishes that always has a catch. Like you wish for all the money in the world, and then you literally have all the money in the world and everybody wants to murder you for it. Or you wish you had a toasted cheese sandwich, and you get one, but it means your entire family dies. Fuck those wishes.

So yeah, I wished for a Warhammer 40k Space Marine game, and I got it, but the curse is that it’s not very good. Fuck. I feel cheated. Why? Alright, I’ll explain in excrutiating detail so that you’ll have even MORE reasons to loathe me and confirm all your suspicions that I am indeed a terrible human being.

First of all, the biggest issue the game has is that it picked the worst possible chapter of Space Marine. Fucking Ultramarines? Are you shitting me? The most boring, rigid, emotionless fucks in all the galaxies? You picked THOSE GUYS? Fuck you. There’s like ten thousand chapters of Space Marines, and they all have better backstories and characters and attitudes and flaws than the Ultramarines. For those unfamiliar with the Warhammer 40k universe, the good guys are the Space Marines. They’re the ultimate badasses serving a god-emperor of humanity and their sole purpose is to fuck up anybody that’s an asshole. There’s a shitload of them, and they’re all divided into chapters which have their own strengths and weaknesses, their own color schemes and sigils, their own unique leadership, etc etc. The Ultramarines is one such chapter. However, the Ultramarines are literally the chapter with NO strengths or weaknesses, NO unique, defining features or characteristics, NO flaws. They’re literally genetically flawless superhumans. 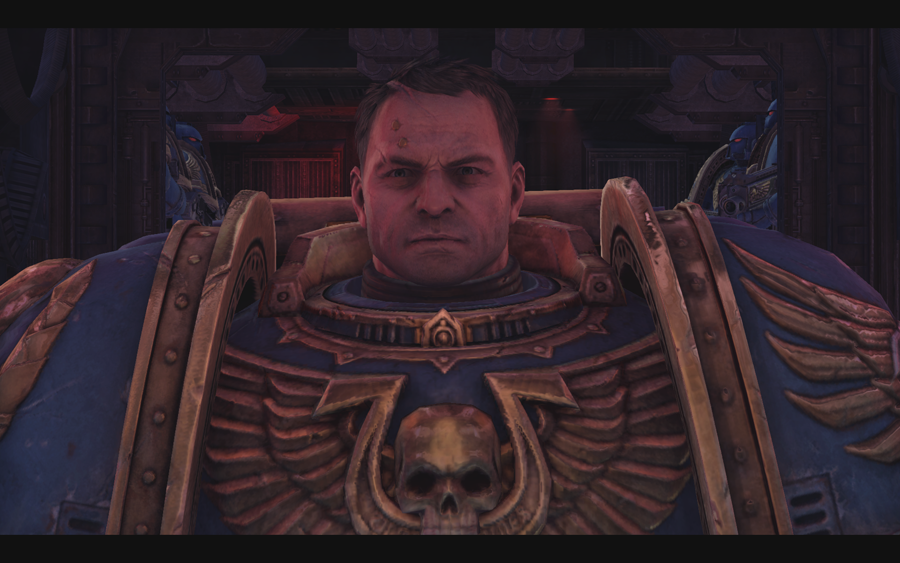 Whatever. Fine. That’s all I can say about that. Whinging and bitching about it won’t change the fact that they made a grievous error in the most basic and fundamental aspect of the game. The fact of the matter is, even if it’s boring-ass, shitty Ultramarines, Space Marines are still huge badasses. So having to play as the shittiest chapter of the coolest fictional military force ever imagined is still pretty cool and only I care.

The next error the devs made was the enemies. Jesus christ, they have the richest selection of species and factions to choose from, and you pick only two of them. Now, they chose the two best, sure. The Orks are just an unending swarm of brutal, uncaring, violent, vicious, sometimes-hilarious aliens who just really like to fight, and Chaos are the antithesis of the ordered, honorable Space Marines, making them equally as badass for all the opposite reasons that the Space Marines are badass. These enemies SHOULD be super fucking awesome to fight against, but they messed it up really badly.

Let’s take the Orks first. You’ll be fighting the Orks for like 75% of the game. The same three orks, to be precise. You’ve got the orks with axes who run at you and you kill really easily, and the orks with guns who stay far away and stand completely still just firing peashooters at you and usually missing. There are a couple of incredibly minor variations on these two types of enemies, and sometimes you’ll see an ork that’s big, but that’s it. You’ll fight a massive horde of those same enemies in every area of the game, and it’s boring as all hell, partly because it’s super easy and partly because it’s hundreds upon hundreds of the SAME enemy, over and over and over. There’s no challenge, and there’s no variation, so it feels like a huge chore after a very short while.

Then, finally, Chaos shows up (which is blatantly going to happen from the very beginning of the game, but I’ll talk about the plot in a later paragraph). So, you think, hey, fuck yeah, Chaos! Finally, shit’s about to get good! But no. Chaos has the exact same trouble as the orks do, in that there’s no variation in their ranks. You have the type which stands really far away and shoots at you, and there’s also the Chaos daemons who run at you with swords. It’s just not enough variation, and they’re all so painfully easy that it doesn’t matter. They may as well just be more orks, because it’s all the same with how little effort the devs put into the combat and the AI and the enemies. It doesn’t help that each of these enemies comes in the form of a huge horde. It makes them feel like insignificant fodder. Small squads of hard enemies which require you to vary your tactics and strategies and make use of different weapons would make for a much more engaging and fun gameplay experience, but I guess the devs either weren’t smart enough to think of that or were simply too lazy to actually create that.

So anyway, the plot. Now’s as good a time to discuss it as any I suppose. If you’ve played ANY Warhammer 40k game before, or read any stories, you will know that there’s only one Space Marine scenario. A planet has been invaded by orks, and you have to go save the planet. While you’re there, your Librarian or psyker will turn out to be a Chaos traitor and summon the forces of Chaos. That right there is the only Space Marine story ever told, at least in video games. That’s fine, it’s an easy story, and fans of Warhammer 40k will feel familiar with it and people who know nothing about it will be able to understand it. But come on, switch it up a LITTLE bit for once. It’s far too obvious from the beginning, and just doesn’t feel like any effort has been put into it whatsoever. The characters are also painfully dull and unimaginative. But hey, that’s what I was expecting from Ultramarines. 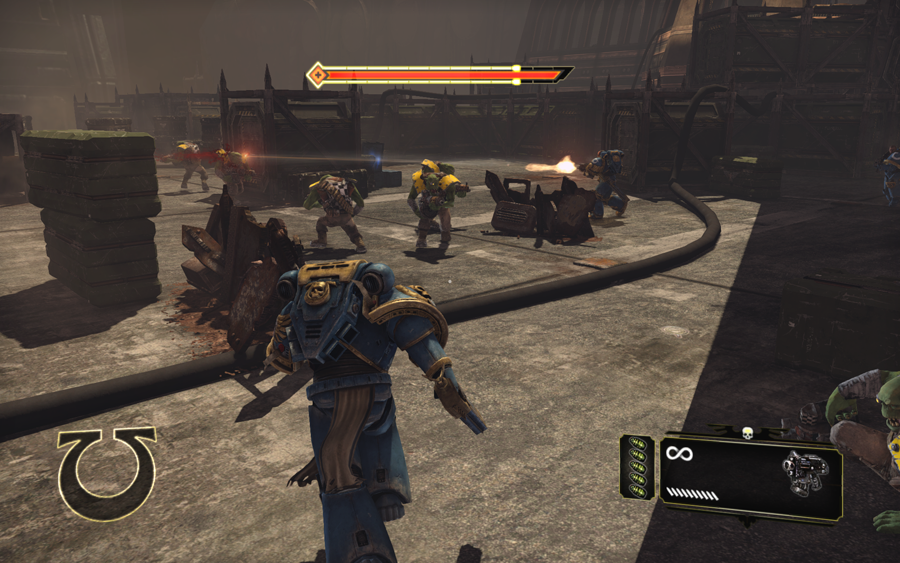 Space Marine features a sort of archaic upgrade system where you find new weapons as you progress through the game, but frankly it’s yet another unimaginative component that feels like it was tacked on almost as an afterthought. It does include most of the coolest weapons in the Space Marine arsenal, but the way they’re all implemented ruins it. The vast majority of the weapons are merely a straight damage upgrade from your previous weapon. You can have four weapons equipped at one time. One of them has to be a pistol and one of them has to be a bolter, which is effectively the M16 of the 40k universe. Both of those receive straight upgrades to their damage at some point during the game and get replaced with a different version of themselves. Yawn. Fine. Whatever. The other two slots can be a Plasma gun, a Melta gun, a Lascannon, a Storm Bolter or a Vengeance launcher. Considering almost all of those are SHIT in this game, you’ll use the Storm Bolter and Lascannon. The Lascannon is the game’s sniper rifle, meaning it’s your go-to gun for cheesing your way out of bad situations, and the Storm Bolter is just plain powerful and has assloads of ammo, giving it an edge over the other choices (the melta is close range only and is effectively a shotgun in this game, and the plasma gun has less bang for your buck when compared to the Storm Bolter, and the vengeance launcher is just plain ass). So yeah, there’s effectively very little choice of weapons given the fact that you’re forced to use two, and there’s only two other good ones. The rest would be a waste of a weapon slot.

Another issue is the ammo. You’ll never run out of it, because the game shits ammo everywhere, I assume because it’s scared you might somehow manage to die. You won’t, of course, because you could quite easily play the entire game using only melee, considering the fact that you regain health by executing enemies at melee range, and melee is ridiculously powerful and useful. Yeah, there’s a handful of different melee weapons, too. Chainsword, Power Axe, Thunder Hammer. Oh, you also start the game with a knife, but who cares about that. As far as I’m aware, there’s little difference between the weapons. I assume that the axe deals more damage than the chainsword and the hammer deals more damage than the axe, but everything dies so damn fast it’s hard to tell. The hammer is huge though and it means you can’t use two of your four weapons when you have it equipped, so I tended to stick with the axe. The game likes to claim that each weapon has different combos, but that isn’t true. Every weapon has the same combos. X-Y, X-X-Y, X-X-X-Y, and X-X-X-X. I think one of them might have had X-X-X-X-Y, too. Whatever. The combos don’t make enough of a difference strategically to matter, so you may as well just slam X and hit Y every now and then. Nobody’s gonna care what happens, the only result is that everything around you will die.

The gameplay itself feels decent. The gunplay is good, and certain elements of the game feel satisfying, but they don’t feel satisfying every time, like they do in Gears of War. In Gears, EVERY headshot brings you close to orgasm, EVERY execution makes you feel like you’ve just made some asshole teenager throw his controller at the wall, but in Space Marine, executions get old very quickly, and there’s little feedback to be satisfied by. It’s cool at first, but then it gets boring. There’s no cover mechanic, so it’s kind of a rigid move-around-and-shoot-game, which, when coupled with its linear progression (both in the story and in weapon upgrades), makes it feel very dated, like a remake of a game made in the 90s or something that’s just been made to look very pretty.

I’ve talked way more than enough about this now, so I’ll wrap it up. It’s a decent game, it’s neither bad nor good. As a 40k fan, I feel like they skimped in a LOT of areas and as a result it doesn’t live up to its potential. They had the biggest, best and most fully realized universe and story and characters to work with, but they just… didn’t. They cut every corner and took all the easiest routes, and as a result it’s just a mediocre game. I’m sad about that.

Oh, and for FUCK’S sake, if I ever see another god damn quicktime event for a final boss battle I will take four shits and die. 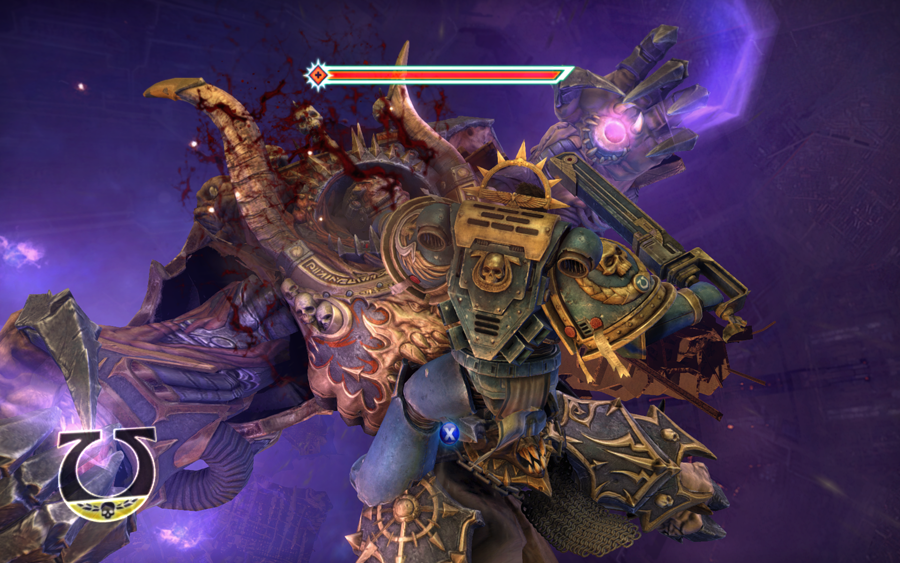