The main character is a woman whose story is never properly explained. Basically she’s a British assassin with a god awful voice actress who over-exaggerates the English accent and sounds like she should be in some shitty high budget period movie alongside Keira Knightley wearing a corset that slowly crushes her ribs while they discuss the correct tea to drink on a summer evening when in the company of gentlemen.

The game’s schizophrenic storytelling is reminiscent of that stupid shit that Assassin’s Creed did, only in Velvet Assassin it doesn’t tell any story at all apart from “Oh shit we’re some French dudes and we’re hiding coma chick from the Nazis”. Seriously, that is all. You’re constantly interrupted from gameplay by these flashbacks (or flash forwards? I don’t even know) and they don’t explain any story whatsoever.

For the first few levels you get to grips with the stealth gameplay; sneaking around, waiting for the opportune moment to knife a guy in the dick from behind and then break his neck while he’s keeled over in pain. After a little while though, you suddenly realize that the most effective thing to do is to simply shoot everything because it’s a lot faster and it’s much more convenient and there aren’t any penalties for doing so. 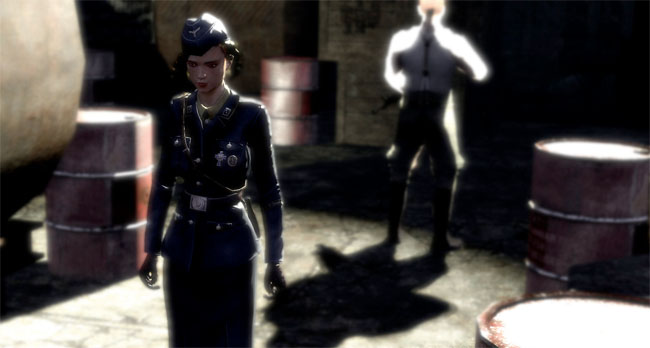 The game’s developers/publishers/whoever the fuck tout the game’s “character upgrade” system. This is retarded and here are several reasons why:

It doesn’t fucking make any difference whatsoever. You can upgrade three things: Strength, Stealth, and Morphine. I’ll explain each of these in humiliating detail.

Stealth: This is your ability to sneak up behind someone and knife him in the dangler without him noticing you. This was the first thing I upgraded and I maxed it out. It made no noticeable difference in my stealth capabilities.

Strength: This was the last thing I upgraded because you will never need strength, ever. Strength means that if you run up to a guy and swing your knife at him, you can swing it a bit harder and do more damage. You will never have to do this since a stealth kill doesn’t require strength, and if you aren’t killing someone with stealth, you should use a gun. If they know you’re there, you’ll die before you can knife them anyway.

Morphine: Okay, morphine mode is an instant win mode where you freeze time in order to knife someone in the ding dong without any consequences. When in morphine mode Violette takes off all her clothes for some reason and strips down to her slutty underwear again. I guess maybe this is to distract the Nazis. Anyway time has stopped so she can now just run all around a guy without anything bad happening. Upgrading Morphine mode lets you carry more morphine syringes. This is essentially useless. Basically, you start out with the capacity to carry one syringe. You have to find some morphine in the level and pick it up. Then you can use it whenever, and once used you need to find another one. This is not difficult. They are everywhere, as are health packs. Due to the sheer quantity of naturally occurring morphine in France, you’ll never need more than one syringe. 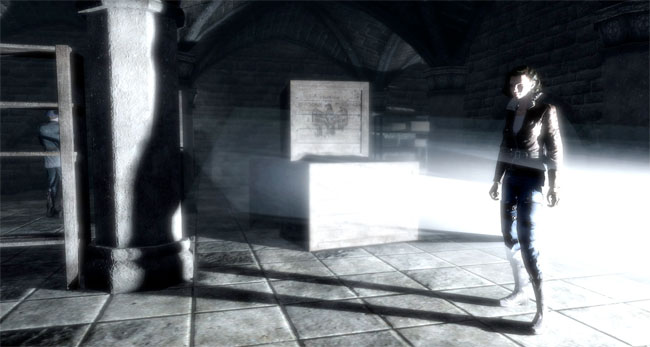 The game has some good ideas, it just implements them all wrong, or not at all. One thing I liked the idea of was the ability to manipulate light to create dark areas in which to hide, however you basically only get to do this for real once or twice. Sure you can break every fuse box you come across in order to turn off a bulb here and there, but they make almost no difference. The game gives an example in one of its tutorial loading screens where it shows the player pushing a box in front of a light in order to block the light. This is only possible ONCE during the entire game as far as I could tell, and it made no difference to how I chose to progress.

The AI is pitiful. I actually pitied it. I honestly felt so bad for the developers who must be hell of embarrassed right now. I imagine some of them must have bit down hard on cyanide or are as we speak hanging from a rafter in their basements. Perhaps the ones who are still alive are seeing psychiatrists or have already gone completely yell-at-strangers-on-the-subway-insane. Anyway, the AI is terrible and inconsistent. They all walk their own little rigid, timed paths back and forth. You have the ability to whistle to get their attention. You would think that you could whistle, and then hide, so they come to investigate where the whistle came from and you could give them a knife in the bacon rod, right? Wrong. You whistle, you run off and hide somewhere, and they will simply come straight to you rather than investigate where the whistle came from. All the while, they will be GLARING at your hiding spot. They always know exactly where you are, which kind of shits on the stealth gameplay.

Another major fuckup with the AI is that you can grab their attention (i.e. by ganking their friend in the hog right in front of them) and then just run through a door. They don’t seem to be able to master doors at all. So, you cut off someone’s junk, and then run into the next room and look through the keyhole and just wait until the still-living Nazis all go back to their rigid patrol routines and forget all about you.

The game’s biggest flaw, in my opinion, is the fact that you cannot see shit. It is basically pitch black, and what little light you see is in ridiculously high contrast with everything else, making the game look like an incredibly overexposed photograph. It also means that YOU CANNOT SEE SHIT. It’s very easy to miss a door you’re supposed to go through, or an entire corridor, or god knows what else. However, this was intentional. The devs thought it would make the game more tense or something and they gave Violette a torch. But if you use the torch, Nazis instantly see you and know where you are. So, I left my torch off at all times and turned the brightness up to max so I could actually play the damn game.

All in all, the gameplay is merely average even during its best moments, the visuals are terrible, and it’s story is non-existant. Also the controls are not that great and it feels sort of clumsy. It also throws in a bunch of shitty, played out “war is bad” imagery at the end. It’s pointless and unnecessary and we’ve seen it in every world war 2 game ever. Give us something new, please.