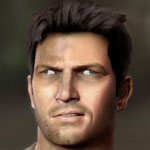 With Uncharted 2 just recently releasing, I figured I’d stow away on the bandwagon and see if it was a smooth ride, with every intention of violently murdering all the other passengers if the wagon hit so much as a single pothole along the way, making sure that the last words each of them heard before death claimed them were “YOU WERE WRONG”.

I’m gonna just come out and say it – Uncharted has really bad combat. Aiming is slow, the guns are inaccurate, the enemies have far too much health and they possess the superhuman capability to duck under your headshots, which they will all do with infuriating regularity and efficiency. If I have to explain to you why this is retarded, how about I shoot at your head right now and we’ll see if you can dodge it.

Uncharted’s developers are obviously aware that it has flawed combat, but rather than trying to make a more effective system they instead made its encounters challenging by swarming you with more enemies than necessary, from all angles, so that no cover is safe to hide behind, effectively shitting all over the game’s cover system.

I can tolerate bad combat to a point, and admittedly Uncharted’s combat isn’t all that bad, at least when compared to some other games, but 75% of Uncharted is all about combat, with only a small dash of exploration and puzzle solving, which the game does relatively well. As such, the game is presenting you with its worst side almost all the time, and burying its much better aspects. Once again I feel I have to pin the blame on lazy design for these flaws. 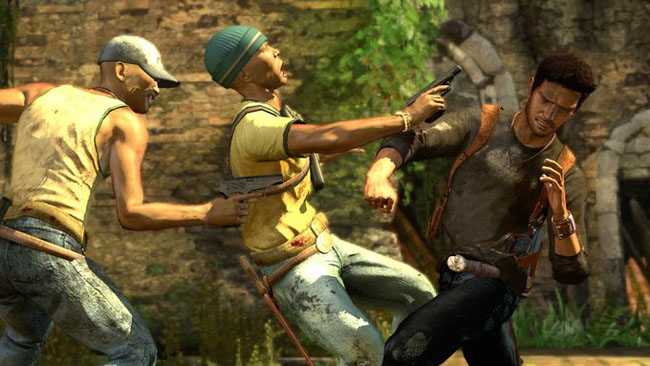 A particularly annoying part of the combat is the fact that the enemies have a ridiculous amount of health. I believe this is due to another design flaw; Uncharted seems to want to limit your ammo at all times, and as such you have to constantly scavenge the weapons of fallen enemies. However, in order to give you a reason to pick up new weapons, it has to make you run out of ammo as much as possible, and as such they decided to make the enemies bullet sponges. As a result, any realism in the combat is ruined because guys who are only wearing a sleeveless shirt are surviving up to ten bullets from an assault rifle. Also, strangely, fat guys have more health in Uncharted than athletically fit ones. I don’t understand the logic there.

In comparison, the player has almost no health at all and will die if so much as a paintball hits him. Due to this unfairly balanced system, you have to spend every encounter hiding behind cover just waiting for the enemies to reveal themselves so you can take a few quick shots before hiding again. Recognising this, the game’s developers make the last boss fight quite the proverbial finger, providing you only with minimal, temporary cover, against vast numbers of enemies as well as the game’s antagonist (some guy who was only even introduced about half an hour before the end of the game) who happens to have a shotgun that will kill you in one hit and has 100% accuracy because he has a laser sight, which in Uncharted means his gun is more powerful. Seriously – towards the end of Uncharted, it introduces enemies that have laser sights, and this means their guns will one hit kill you. Because they have laser sights.

And yes! There’s more! Now I’d like to talk about grenades. Something I’ve noticed in every PS3-exclusive game that I’ve played so far is that there is always one token use for the sixaxis controller’s motion sensitivity, and it is always bad. In Haze, you had to shake your controller like a retard to put out fires, in LittleBigPlanet you had to shake your controller like a retard to remove the jetpack, and so on and so forth. I’m convinced that Sony demands that its developers include some use of the sixaxis motion controls in their games, because every single use of it to date has seemed completely forced and unnecessary. In Uncharted, you have to tilt the controller up and down to aim your grenades, and it’s really, REALLY awful. Half the time you can’t see where the grenade’s going to land, and you need both of your hands occupied working both analogue sticks while tilting the controller around. It all feels extremely awkward and it forced me to forego the use of grenades in almost all scenarios.

I’m almost done badmouthing the combat, but I do need to say one final thing, which is related once again to the game wanting to limit your ammo and weapon choices at all times. The game features a multitude of weapons (all of which will be familiar to anybody who’s played any FPS in the past five years). At any given time you can be carrying one sidearm and one larger, more powerful weapon, such as an assault rifle. Picking up a new sidearm will replace your current sidearm, and picking up a new main weapon will replace your current main weapon. That’s all fine and good – that’s not what I have a problem with. What I have a fucking problem with is the fact that if I’ve got a 9mm uzi that’s run out of ammo, and I want to replenish that ammo, and there is a 9mm pistol on the floor, I cannot use the 9mm ammo from the pistol in my 9mm uzi, instead my only option is to pick up the pistol and throw away my uzi. Screw you, Uncharted. FUCK you. The same flaw exists with other weapons, such as the two different 12-gauge shotguns in the game, and another 9mm pistol, all of which are incredibly common weapons.

I’ve said all I really need to say about the combat, and since it’s the game’s only major flaw I’m pretty much done with the negative comments about Uncharted, so I’m going to talk about what the game does right – and believe me, it does a lot of things quite well.

From the beginning of the game I was very impressed by its music, sound effects, settings, characters, voice acting, and plot. Its overall gameplay is smooth and feels relatively natural, which is a very good thing as you’ll need to be accustomed to it in order to navigate the game’s numerous platforming sections, which are entertaining, if by-the-book and straightforward. 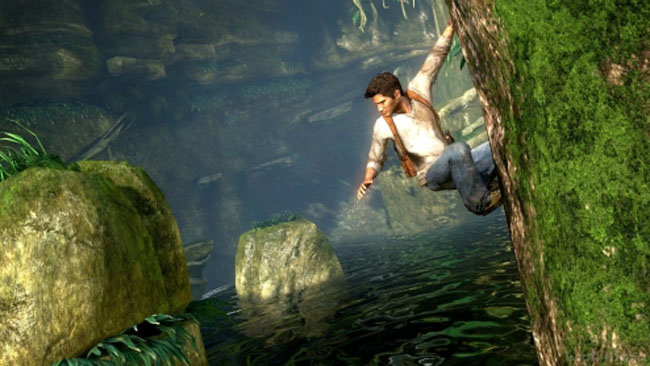 There’s a fair amount of exploration involved in the game, at least if you’re looking for all the hidden treasures throughout. Otherwise it’s very linear, and there’s rarely a moment that you’ll get stuck wondering what you need to do next. There are only a few puzzle sequences in the game, but they’re relatively good, if extremely easy. It makes me sincerely wish that they’d made puzzles the primary focus of the game and toned down all the combat.

The story is compelling at first. I’m a sucker for re-imaginings of old myths and legends, in this case the legend of El Dorado, so I got sucked into the story pretty quickly. Nathan Drake is a descendant of the renowned Sir Francis Drake, and is following a secret trail left by his ancestor in order to find El Dorado. Along the way, Nate comes across the remnants of Nazi expeditions that also sought the same treasure (Ohh, those Nazis! Always up to mischief!). Unfortunately the game takes a really retarded turn at the end and it turns out El Dorado is cursed and everybody who’s ever found it in the past have become zombie mutants and now they’re out to get you. It was like finding a turd at the end of a rainbow.

Anyway, all in all I enjoyed Uncharted, it’s just a shame that its combat was so significantly flawed and took up most of the game.