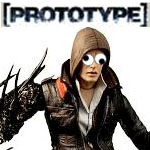 After playing inFamous, I have to say that Prototype just doesn’t compare. The controls, visuals and physics are all inferior by a noticeable margin. That doesn’t make the game bad, it just means its developers didn’t put in as much effort as they should have. It’s still very playable.

It actually has a much deeper combat system and far more combat upgrades than inFamous has to offer, which does at least make Prototype significantly more varied when it comes to combat, which in my opinion was inFamous’ only major failing.

Unfortunately though, Prototype has many imperfections throughout, in the story, setting, the controls, some of its core gameplay elements, its enemies… there’s something wrong with basically everything, truth be told. I’ll start with a huge personal bugbear: The “disguise” element of the game doesn’t make a single shred of sense.

The disguise system is simple enough – when wearing a disguise, there’s a little orange bar that displays how suspicious you are. If it reaches 100%, the military realize who you are and attack you and your disguise is useless. That’s fine, it’s just that, well, unsuspicious things cause the bar to max out super fast, and the use of super powers goes ignored. Apparently the power of flight is common among soldiers, so it’s completely normal for one to be flying around and sprinting up the walls of buildings and such.

Okay, fine. Fuck disguises, I’ll just sprint up the walls or fly to my destination! Wait, the soldiers see me flying and… don’t care? Nonsense!

The entire thing smacks of We-needed-an-interesting-gameplay-mechanic-but-we-don’t-have-a-fucking-clue-what-we’re-doing Syndrome (WNAIGMBWDHAFCWWDS), which is common among Activision, Ubisoft and EA employees, to name but a few.

More nonsense appears in the form of the game’s AI, both civilians and enemies alike. The city is infected with some disease or whatever and people are basically turning into mutant zombie things. And yet the uninfected civilians still leave their homes and roam the streets, despite the fact that more than half the population are zombies who are attacking, killing and infecting people left, right and center.

WHAT THE FUCK? I’m sorry, but that is retarded. If there was an infectious and incredibly dangerous disease, people would barely leave their homes and the streets would practically be empty, let alone a fucking zombie infestation. There are god damn ZOMBIES and people are milling around in the streets, going about their daily business, getting attacked, but carrying on as if nothing is wrong. I’m sorry, I thought this was supposed to be America, not England, the nation of denial.

The enemy AI is not much better than that of the civilians. The game’s primary enemy, known as Hunters, are basically super zombies or something. The thing is, they know where you are at all times, you are their primary target, and they will never, ever leave you alone or stop respawning. If you have an objective, you can guarantee there are infinitely respawning hunters that will do their god damn best to piss you off when you’re just trying to do the smallest thing. They aren’t easy to kill, either. You pretty much have to wait until you obtain the sword-arm upgrade before you’re able to do any significant damage to them.

The game’s story is yet more of the same old crap. GUB’MINT DOIN’ BAD STUFF. CORPORATIONS BEIN’ EVIL. GENETIC MODIFICATION. And you’re the poor little Johnny Everyman who had super powers thrust on him and now you have to put a stop to all of it.

Oh, and of course, because it’s one of those open world games, you have the same exact side quests that are present in every open world game, such as “Find all 100 hidden items” and “Run through all these checkpoints before the time runs out” and so on. I didn’t bother doing them in Prototype, because I’d just spent ages doing the same exact things in inFamous and didn’t feel like doing it all again.

I don’t really know what else to say about it, so I’ll leave you with an analogy: Prototype reminds me of an arrogant teenager. You know the type, around 17 or 18 and they think they have everything figured out and that they’re better than anyone else and they reject any and all advice that better, smarter, wiser people give them. This game seems to think it’s hot shit, but in actuality it is literally a dog turd that’s been microwaved.

Final playtime: Around 8 to 10 hours, who even cares.