I may as well stop writing reviews because it seems that most of the time Yahtzee talks about the same game and says many of the same things, and he does it right before I post my review which I’d written days beforehand. Whatever. At least my hat will always be cooler than his. Although, he has a show, and I don’t. I could have a show. I’d be a great host. You think I couldn’t host a show? I’ll host a show so hard it’ll- Oh right, Prince of Persia.

Uuuugggh. That’s what I was thinking every second I was playing this “game”. Except sometimes I was thinking “UuuUUUUGGGGGGGGGGGRRRRAAAAGH“. Until I’d played it for about 6 or 7 hours, then I actually started to enjoy it. But that passed pretty quickly.

You’re probably wondering why I said the word “game” in inverted commas. The reason I did was that I simply don’t consider this a game, because you don’t play it – it practically plays itself. You often don’t need the control stick, because the game is essentially one long quicktime event in which you cannot die. You only need the A, B and Y buttons to navigate the majority of Prince of Persia, and if you somehow press the wrong button or fail to press a button at the right time, you’ll fall – except you won’t. You’ll just teleport back a little way. Because god loves you.

No, seriously. If you fall, you get saved by your magical friend with god powers (who I think is supposed to be an attractive woman or something) who teleports you back a few feet to wherever you fell from so you can try again. You can do this as many times as you like. You don’t have lives, because you cannot die. You can’t die in combat, either. Let’s talk about that.

The combat, like the rest of the game, is the same quicktime event over and over again. You’d think you could die in combat, right? Sorry, nope. No sweet release for you. You have to stay alive and suffer all of this stupid bullshit, because once again, your magical god friend will save you if you’re about to get curbstomped, or get a sword through your chest. You can also beat all of the game’s enemies by taping the attack button down on your controller and going to get yourself a nice cold glass of whatever it is you like to drink. By the time you’ve come back, you’ll have won.

I found this boring, and so might you if you got this game for whatever reason, so I’ve made up my own game that should make things more interesting for you whenever there’s combat in Prince of Persia. Basically, you set your controller aside and grab a deck of cards.

Seriously, I think this idea has legs! It could be big. I think I’ll call it “Solitaire”.

So, where was I? Oh, right. Prince of Persia. I think I’ve done enough to make the combat sound more boring than church, so I’ll talk about something else now. The voice acting is decent, but it’s a shame about the dialogue. Honestly, this shit is even cheesier than Gears of War. It’s like a mid nineties American sitcom (DAMMIT YAHTZEE I SAID IT FIRST I JUST POSTED IT LATER. Shit I’m going to have to start date-stamping my comments). The plot has also been done before. Good god of light, evil god of darkness, yadda yadda. 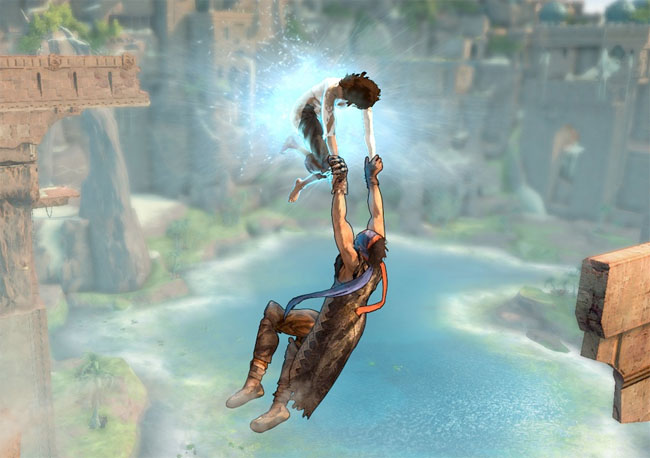 One thing I noticed when playing is that the game in general both looks and feels a lot like Shadow of the Colossus. Like, a LOT a lot. You have a temple in the center of a large, flat area, and you follow a blue light to a series of destinations that surround that temple. Areas where you have to do a lot of climbing and jumping. But hey, Shadow of the Colossus was a good game. If they were going to rip a game off, then at least they ripped off a good one.

In order to pad gameplay time, Prince of Persia likes to make you collect “light seeds” in every area of the game in order to progress. It’s annoying, tedious and shameless, considering there are hundreds of them. Speaking of annoying, tedious and shameless, the game makes you fight each of its small handful of bosses at least three or four times each.

I thought the ending sucked dick. You basically undo everything you’ve done throughout the entire game, which kinda shits all over all that time you just spent playing, huh?

In summary, Prince of Persia is cheap thrills, through and through. Extremely cheap, and barely thrilling at all. In all honesty, I consider it to be a toy, rather than a video game. I think it belongs on the wii (because it doesn’t have enough guns to be on my 360, am I right men?!). Still, try as I might to hate it completely, it was still vaguely enjoyable.

Final playtime: No idea. Seriously, god dammit developers, ALWAYS record time spent playing the game and display it on the save file. All I know is that it was less than twelve hours, because I got the Speed Demon achievement. See, clearly they’re TRACKING time spent, just not fucking SHOWING you. Idiots.