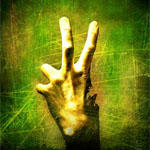 Hmm. This is kind of a toughie. Left 4 Dead is an incredibly hard act to follow, and Valve followed it by simply covering the act in sprinkles and making it do an encore.

I’m not saying Left 4 Dead 2 is bad – I’m saying it’s very good. It’s Left 4 Dead, with new people, in new places, with a few new special infected. But that’s about it. Again, that doesn’t make it bad, it just means they haven’t done all that much with it to make it better. However, as I’ve said before, I hate when developers do too much to a game and make it too far removed from what made it good in the first place, so there’s a fine line, and I guess I can’t complain because the excellent features of the original game have gone unchanged.

The campaigns are now quite a bit more interesting. They’re a little longer, and they’re somewhat more cinematic. You start the game in a burning multi-story building and have to make your way downstairs to escape while the place burns down around you, tiles falling from the ceiling, explosions toppling walls and blocking your path, and so on. This definitely makes things a bit more engaging. A favorite of mine is the Hard Rain campaign, which you can tell the developers must be particularly proud of. It’s obvious that a lot of work was put into it, and the idea of the level itself is fantastic.

There’s now five campaigns instead of four, and thankfully Valve made all of them available for online versus mode from launch this time. Versus mode is the true core of the game – Playing as the special Infected is just too much fun. To quote Yahtzee of Zero Punctuation, the Infected are a hilarious griefing engine. If you get a few friends together for some versus, it will be one of the most fun times you’ll have. There’s little more satisfying than playing as the Infected. Pulling off a successful attack as any of the special Infected is very rewarding, whether you’re leaping off a building and landing on one as the Hunter, dragging one away from the group as the Smoker, splitting them up as the Spitter, or bowling them over as the Charger. The Jockey is also insanely fun, and it helps that the Jockey laughs maniacally the entire time, because that’s what you’ll be hearing in your head when you play as him anyway. The Boomer is boring, though. Let’s face it, nobody likes playing as a fat guy who can’t survive more than three seconds and whose only attack is vomiting.

There’s only one thing that Valve REALLY made worse about the game, and that’s the AI – particularly that of the survivor bots. They’re now completely useless. They shoot you, they run in your way when you’re shooting, they’ll shoot at the Witch and alert her when she isn’t even in your way, or they’ll run right up to her and stare at her until she attacks, they’ll run around like headless chickens if you fall and need to be picked up, they’ll start healing you and then stop half way, they won’t pick up medkits in the safe rooms half the time, they almost never give you their pills if you need them, they’ll stop at critical moments and heal themselves even if their HP is green, they’ll run away from each other when they’re trying to heal each other, and so much more horrible shit. The bots in Left 4 Dead used to be fantastic. They had a sixth sense and would immediately help you out if you needed them to. They’d heal themselves, you, and each other at appropriate moments. They were accurate and relatively intelligent. They never shot you, or each other. In Left 4 Dead versus mode my friends and I, when playing as the Infected, would always take out any bot character first, because they were the most challenging of the survivors. In left 4 Dead 2, we ignore bots entirely as they’re no threat to us whatsoever. If you snare someone with the Smoker, a bot will just look at him and not help out at all.

There’s only one use for the bots in Left 4 Dead 2, and that’s for having a laugh at their expense. Just look at this:

Some people say that “Oh the AI is the same there’s just so much new stuff going on the bots have to do much more now”. No, you’re wrong and retarded. The bots have been severely dumbed down and are nothing like what they used to be. It’s infuriating. Valve, I’m just one guy, but I’m smarter than all of you on this particular matter, so take my advice: Copy/paste the old AI code back in over the top of the new code. Just do it. It’ll probably have some bugs now because of the additions that have been made to Left 4 Dead 2, but you can work those out over time. We’d much rather have slightly bugged bots than completely stupid ones. I’m looking forward to hearing back from you. Kind regards, Shepton.

Left 4 Dead 2 has also introduced a couple of new game modes, Scavenge and Realism. Scavenge mode involves the survivors trying to collect gas cans to fuel up a car, or a generator, etc etc, in order to win, while the Infected simply try to stop them. After a round ends, the players switch sides, etc. It can be a fun and quick alternative to Versus mode, which usually takes an hour or so to play through a campaign. Realism mode is a co-op campaign but without the usual highlights and glows around objects and players, so there’s no tips or alerts when you need to be aware of something. This means all you can do is keep an eye on your teammates as much as possible and hope you don’t get separated. It’s thrilling, and can even be a little scary at times.

Left 4 Dead 2 is a great game, but truth be told I miss the original four characters, and I miss the smarter bots. The new weapons haven’t added anything to the gameplay, they just look a little different. Melee weapons are fun and do add a fraction more to the experience, the new campaigns are all pretty good but I still think No Mercy from Left 4 Dead is better than all of them, Nick and Coach are the only good new characters but they’re still not as good as the original four survivors, and the new Special Infected are really the only major change to the game. I really love Left 4 Dead 2, but frankly I still think they could have just added the new special Infected and weapons to Left 4 Dead or something – and they still should. Left 4 Dead is still a pretty new game, and it’s still really fun. I’d say it’s kinda ironic that Valve will now turn all their attention to their newest creation and Left 4 Dead will live up to its name.

Final playtime: Ongoing. Probably 20 hours or so, but I’m gonna be playing it for years to come. Or at least until Left 4 Dead 3, which will probably release in November 2010.