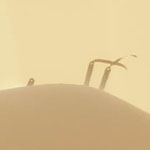 If you’ve ever seen my review of Flower, you’ll know I have a thing for the kind of artistic, experiential games thatgamecompany makes, and Journey is most definitely artistic and experiential.

Journey is a simple game, more about the experience of playing it than it is about innovation in gameplay or visuals, although in some ways I’d say that it actually is pretty original and
innovative by simply being simple. 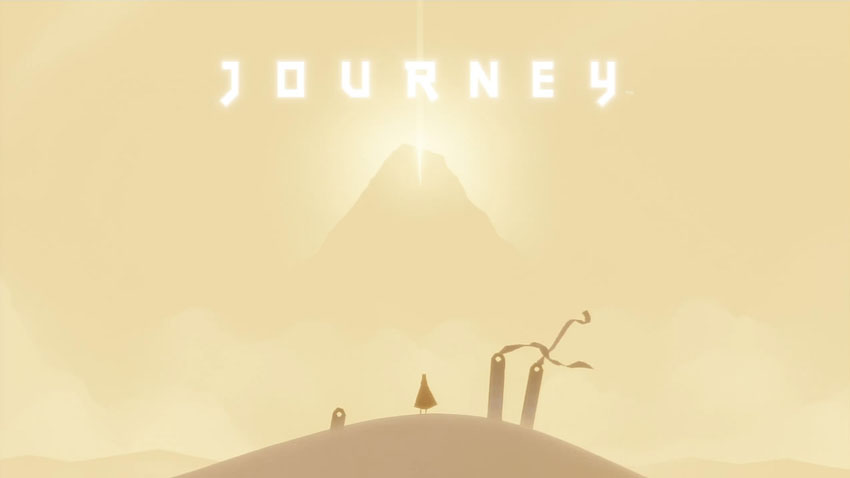 In Journey, you play the part of a robed figure. Your journey begins in the middle of an expansive desert, and in the distance ahead you can see an enormous mountain with a light shining at its
peak. Your only goal is to reach that mountain, so you move toward it, and before you know it, you’re forging a path through a series of beautiful settings, struggling against powerful winds, avoiding ancient dragon-like creatures made of stone, climbing vast towers, surfing down steep sand dunes, and eventually braving the sheer cold of the mountain as you begin to near your
destination.

One of the things that makes Journey stand out a little bit from other linear adventure/puzzle/platforming style games is that it has co-op elements to its gameplay. You’ll be randomly and anonymously paired up with another player at the same point in the game as you, helping each other to reach your ultimate goal. Each player’s only form of communication is a simple whistle
caused by tapping the circle button, or should you choose to you can charge it up and release a louder whistle which also causes a small area of effect bubble to spread out around your character,
recharging the “mana” of the other player should they be within range, and during the freezing cold mountain sections of the game, players need to stay close together in order to stay warm, or their mana drains rapidly, leaving them unable to jump, which can make avoiding certain obstacles difficult. 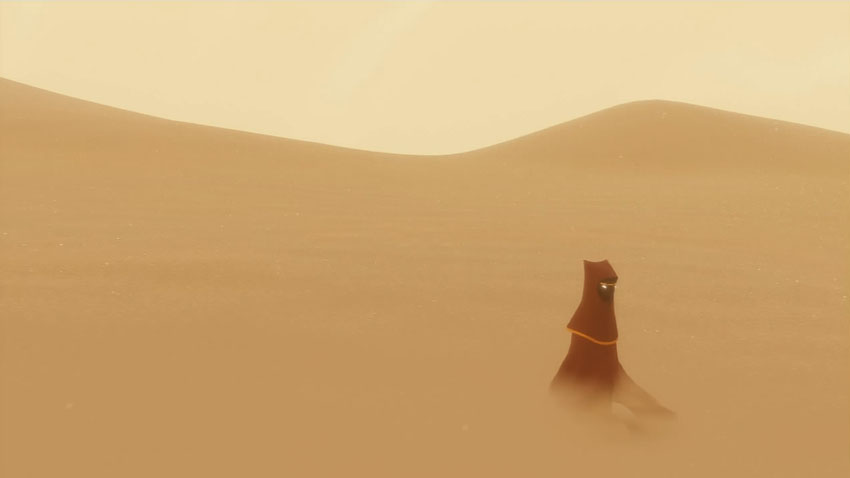 Though these interactions with the other player are incredibly limited and may seem basic, it’s surprisingly effective and somewhat moving. It’s hard not to empathize with your partner, despite
the fact that you don’t know their name and are entirely unable to communicate. This empathy and connection you feel with your partner is in part aided and built up by the game’s masterful use of
music and visuals to evoke emotion.

Like Flower before it, Journey is a game that makes excellent use of beautiful music paired with gorgeous scenery and settings that have a sort of majestic, simplistic beauty to them.
Journey in particular does an especially good job of using its music and visuals to help immerse the player in its world and evoke powerful feelings with nothing more than a simple change in
lighting or musical tone. At one point in particular, you spend some time enjoying a nice, care-free surf down enormous sand dunes into a ruined city, marvelling at the scenery for a while, before
suddenly being plunged into a dark and frightening dungeon where you’re forced to stay out of the line of sight of some enormous hostile creatures. It’s difficult not to feel a pang of fear in
that moment, and a sense of worry during the later, cold stages of the game, as your robe begins to freeze over and all the mana is drained out of you.

In a similar fashion, Journey conveys the sense of a deeper story and gives insights into its world and your character’s quest without using words, using only simplistically illustrated stories
in the form of mysterious, ancient-looking murals that you discover along the way.

It’s a very short game, being only an hour or two long depending on how much or how little you take the time to explore, but surprisingly, I didn’t care. I did find myself wishing that it had been
longer, but at the same time, it was a complete package. It was clearly designed to be played through in one sitting, and be enjoyed and experienced for what it is. And despite its length and
simplicity, it has a surprising amount of replay value. I’ve played it a few times by this point, and it’s always a fun experience.

Final playtime: Roughly one hour per playthrough, but has a lot of replay value