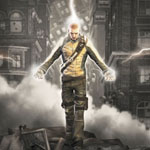 Final verdict: B-
Final playtime: 10 hours or so

I played the demo of inFamous a couple days ago, and was impressed enough to buy the game. And y’know what? Money well spent. inFamous is good. Okay, it’s nothing groundbreaking or amazing, but it’s been very well made and it’s really fun to play, and that’s exactly what every videogame should be.

The visuals are great. Really great. There are also a bunch of animated scenes in a comic-book sort of style, which look really good and make nice little story sandwiches between sections of gameplay. But visuals are just eye candy. They’re a nice extra. The gameplay is what’s important, and inFamous gets it right.

The game begins in Empire City, with a huge electrical explosion. After the explosion, you see Cole, the game’s protagonist, right at the epicenter of where the blast originated. He’s instructed by police to evacuate to safety and the game’s tutorial section eases you in pretty smoothly. The controls and physics are almost flawless – everything feels very natural and fluid, from movement to using your powers. There’s also a lot of freedom in movement in inFamous – you can climb almost every building, car surf, grind along railway tracks. All kinds of stuff. It’s a lot of fun.

Having said that, the movement system can fail you right when you really, really need it to work. It tries to make things easier for you by automatically grabbing onto nearby things, but in actuality this often makes things a lot harder, especially if you’re trying to do something quickly.

The combat is entertaining and pretty well thought out – at least, for Cole. Your enemies have AK47s, RPGs and occasionally grenades, never anything more. They also apparently don’t have eyes, because they can’t aim and serve only as targets for you to shoot with electricity, rather than a challenge. I think that’s kind of the point of the game though – Cole has all of these crazy awesome attacks like the Megawatt Hammer (where you launch an electricity grenade in the air and then have it home in on an enemy), and I think they just want you to feel good about yourself for obliterating everything without getting hurt.

In fact, the game is so easy that when you die during a mission, you reappear with full health exactly where you died, without any negative effects on the outcome of the mission, so there’s really no reason to fear death in inFamous. While I do like the fact that it’s a lot less frustrating than how Grand Theft Auto usually handles its deaths during missions, it kinda makes it feel like there’s no threat, so you can just gung-ho your way through the game without any concerns.

The game’s name stems from its whole “morality system”. Yeah, we all know what that means. It means you get to make choices like this:

a) Drown the sack full of puppies, then kill everyone and steal their wallets because you are such a douchebag, or b) Save the puppies, give them to orphan children, give the orphan children and their puppies to loving families and then give everybody a hug because you’re just such a nice guy.

For once, I sincerely wish someone would develop a morality system which wasn’t obvious, and had grey areas, and you actually had to make hard decisions. In inFamous, there are no rewards one way or another for your decisions. It’s generally “get some blast shards and be a dick” or “save the day and get some blast shards anyway”. Oh, I guess I should explain; blast shards are like extra “batteries”. Your moves require energy to use. Blast shards essentially give you a larger tank of energy to draw from. It makes very little difference since your default zapping power is what you will always use, and that costs 0 energy. Not only that but even if your “energy tank” is small, you just refill it constantly with all the nearby electricity from cars, or streetlights, etc etc. Blast shards are essentially useless, and therefore the morality system may as well not be there.

I hate shitty, boring, pointless, transparent morality systems like the one present in inFamous. Seriously, if you can’t be bothered to create a good one, don’t implement the same one that’s in every game. We’ve done it dozens of times before, and we’re bored.

While on the subject, inFamous’s morality system seems to be really fucking twitchy, and kinda bugged. At one point I killed a ton of bad guys and saved the protagonist’s love interest from the roof of a building where she’d been kidnapped or something, and it apparently made me more evil. Every now and then, you seem to get Evil points for no reason whatsoever.

The story’s compelling enough to keep me playing. Some bad guys did some experiments that caused your powers, now you’re going to fuck them up, and the FBI is involved and are manipulating you into working for them, yadda yadda. It’s your standard super hero story mixed with your standard modern story. And by “standard modern story” I mean the same one in every movie in the past 8 years. TERRORISTS. AMERICA. FBI and/or CIA and/or NSA AGENTS. AN EVERYMAN CHARACTER AND HIS LOVE INTEREST. UPPERCASE TYPE.

So yeah, it’s interesting enough, but clichéd. The ending of the story is really fucking bad, though. Ugh. Time travel? Really? That’s how you’re gonna play this?

In summary, decent but nothing special. It has plenty of bugs but they’re forgivable. If anything, I’d have liked it to be harder and more of a challenge – it’s unbelievably easy. The AI is severely lacking – on one escort mission, the guy I was protecting promptly ran into a trash can and fell over. Oh, and the slightest touch will make pedestrians fall over in inFamous. Everywhere you look, three or more people have fallen over and cannot get up. I’m not exaggerating.

Final play time: 10 hours or so