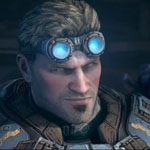 Yeah sorry. I moved to another country, got married, got a 9-5 job, and moved house. That shit takes time.

Alright so I guess now we can officially say that only odd numbered Gears games are good. 1? Great. 2? Weak. 3? Pretty damn good. Lame.

So Gears Judgment confuses me a little. For the first time in the Gears series, it feels… different. Kinda bad different. It tries to change and reinvent things about the series that were never problems to begin with. Gears 2 was straight up awful, but it was largely because the multiplayer had so many issues that resulted in it being a laggy, unreliable, inconsistent experience. But the mechanics of the game still felt like Gears, and the campaign and co-op were pretty good. But Judgment doesn’t feel like any of its predecessors. It feels like a corruption of them. It feels like the wrong developer got its hands on the Gears source code, and that developer just went to the bathroom moments before and didn’t wash up afterwards and now Gears of War is sticky and smells like pee.

Right away, the campaign mode was covered in warning flags. The entire thing was set up like one long Horde mode. Every area in the game is an arena, designed specifically for you to hold up and take on wave after wave of enemies. It doesn’t feel like a linear progression through a rich and lovingly designed world, it feels like… well, Horde mode. A minigame that was made to serve as a fun hour-long alternative from the highly competitive and fast paced multiplayer. It just doesn’t hold up as a full game. I found that it got boring extremely quickly.

Several of my friends who’ve been avid Gears fans since the beginning have always bought these games for the multiplayer alone and have very little interest in the campaign modes, but despite their lack of interest they felt compelled to play through the campaigns at least once because they felt they had to, and that it was important to do so. In Judgment, they played the first chapter and never went back, which I think is somewhat telling of the nature of the game.

I, on the other hand, played through the whole campaign mode. It was pretty fucking disappointing considering it only took me a few goddamn hours. The final boss was an enormous anti-climax. I’m not even worried about spoiling it for you because there’s nothing to spoil. In all of the previous games, there’s been a Big Bad. Gears 1 had Raam. Gears 2 had Scorge. Gears 3 had the Queen. Raam kills your lieutenant right in front of your eyes and plagues you from behind the scenes throughout the course of the game resulting in a climactic final battle on a fast moving train, Scorge kills, captures and tortures your friends and then gets all up in your business with chainsaws before chasing you out of the Locust stronghold, the Queen doggedly pursues you up a tall building and then harasses you and tries to kill your father while he’s attempting to save the world, etc. Judgment has… Some guy. You hear his name near the beginning of the game. You’re told he’s pretty bad. Then at the end of the game he shows up and dies. As cliche as the series has consistently been, it was always fun and entertaining regardless. But Judgment just isn’t compelling in the slightest. You might even say that the real antagonist in the game is Loomis, but even he has no ending and is just a one dimensional dick of a person with no character development.

Once you beat the boss after a few hours and feel thoroughly disappointed, you get treated to what was supposed to be Gears 3 downloadable content that was instead clearly shoehorned onto the end of Judgment to pad it out a little, and find out what Baird, Cole and Carmine got up to towards the end of Gears 3. At this point things started to feel somewhat good again. It was like I was playing Gears 3. It wasn’t a horde mode any longer and felt like it had an actual story again. It felt interesting and important, and filled in some blanks. Admittedly, those blanks didn’t need to be filled, but it was fun nonetheless. I still wish it had just been Gears 3 DLC like intended, though, because at least then I could have played it with familiar Gears 3 controls instead of the new Judgment control scheme. More on that later.

The campaign mode also has these things called Declassified missions. Basically, in every level there’s a glowing red COG symbol which, if pressed, makes the upcoming horde slightly more difficult by adding additional enemies, or replacing enemies with more challenging counterparts, or limiting your weapons to specific types, or sometimes clouding your vision. While this is a somewhat interesting concept on paper, it somehow manages to have even more of a negative impact on the game’s narrative than the already-dull Horde-like gameplay. The premise of Judgment is that you’re playing as Baird, before the events of Gears 1, which of course means the game also suffers from prequelitis, stuff that was new in Gears 2 and 3 is now somehow old news and common knowledge even before the events of Gears 1, and new weapons in Judgment somehow all become lost before Gears 1, etc, which further serves to pull you out of any possibility of being immersed in the story. But I digress. So, let’s get back on track. You’re Baird. You’re on trial, and recounting the events leading up to you being on trial. The court is suppressing information, and you can “declassify” it by telling the truth, hence the more challenging conditions. But it just gave me a kind of odd feeling. If I chose not to declassify, I wasn’t playing the “true” story. It felt wrong that the real events were optional, and that I would be playing a lie if I didn’t choose to activate them. I know plenty of games have optional stuff that results in you seeing the “true ending” or whatever, but that kind of mechanic tends to be reserved for large, sprawling RPGs like the Shin Megami Tensei series, and it makes sense in that context and serves as a substantial additional challenge with a large and satisfying reward. In Judgment it simply feels unnecessary and tacked on.

Oh, and FUCK YOU for all the unskippable cutscenes and the fact that you always put the loading point BEFORE the cutscene instead of after. Is this the fucking middle ages? Fuck you. We’re supposed to be past this kind of shit.

So those are the issues I have from a narrative standpoint. But sadly Judgment has also introduced several technical changes to the game itself that served no purpose whatsoever. For instance, there’s a new grenade tagging mechanic. Why? I don’t know. Gears 3 had it pretty fucking spot on. You can no longer tag a grenade to an opponent by meleeing them with the grenade equipped. You now have to actually throw the grenade and have it hit someone in order to stick to them. Did people think grenade tagging in Gears 3 was somehow unfair, or annoying? I certainly didn’t. It was a pretty rare occurrence in the first place. On top of that, the controls changed somewhat significantly. You no longer select a grenade and then throw it with the usual trigger button, instead you have a dedicated grenade button. I guess they did this because some idiot at People Can Fly decided that it should be more like Call of Duty. Big fucking mistake, retard. This wasn’t a problem and it’s not even the same goddamn genre of game. The least you could have done is included an option to use the original control scheme, but no. You killed that option by entirely changing how weapon switching works. Yeah, that’s not on the d-pad anymore and you have to hit Y to change between your pistol and your main weapon. Because that’s how COD does it and we have to fit in.

The AI is consistently awful throughout the game, whether it’s friendly or enemy AI. Enemies only have two very basic tactics, and those are to rush at you as fast as possible, or run away for no reason and be as irritating as they possible can by wasting your time. Friendly AI perpetually gets in your way, blocking doors or standing in front of you so you can’t shoot at an enemy. If you go down, your teammates will procrastinate for as long as they can before coming to pick you up. It all results in the game being extremely frustrating to play. Overall, it’s just not a good experience.

The multiplayer is really the only enjoyable aspect of Judgment. It’s essentially the same as it’s ever been, though, and merely adds a new mode or two which aren’t anything special. It’s significantly more entertaining to play Gears 3 multiplayer, but since everybody has to play the next thing, Gears 3 is practically dead now. Judgment killed it. The Good King has been overthrown by his spoiled, shitty son that nobody likes. But, it’s still Gears of War in most ways. It’s not bad as such, they just… made Gears 3 a little worse in a whole bunch of different ways.

Final playtime: 6 hours or so.