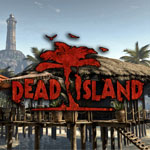 Well shit, sorry it took me so long to getting around to posting this. I’ve been a lazy prick, no excuses. It’s so long after release now I even contemplated not posting it at all, but I’m starting to build up a backlog of things I have to finish writing and post now so I figured I’d just get it done and post it lateness be damned. So here we go.

I guess this is supposed to be a sort of first person zombie survival RPG? And it’s alright, I’d say that’s a decent description. But I wouldn’t put too much emphasis on the “zombie” part.

What I mean is, if I had to describe this game’s setting I don’t think I’d really even mention the zombies all that much, because there aren’t very many of them. If you were considering going on vacation to the island on which the game is set, I would probably say “Yeah, it’s your average tropical island resort. Palm trees, beaches, blue oceans. Some zombies, but it’s not really a big deal. Just exercise caution and you’re golden.” Kinda like a weather report that says there’s a “slight chance of showers”. Well, in Dead Island there’s a slight chance of zombies, so maybe bring an umbrella but you’ll probably be fine. I guess it has more zombies than most places do, but it’s not exactly an apocalypse or anything.

Swenyways. My initial impression of Dead Island was that it’s just one of those games that makes a big splash in the media, but then you play it and realize it’s just not a triple A title and doesn’t live up to the hype. It’s decent, it’s got its perks, but when you get down to it, it’s just run-of-the-mill. I’d say that initial impression was pretty much bang on the money. The more I played of Dead Island, the more my ego inflated based on how right I was. I’m just that amazing that I could probably give every game ever made an accurate grade just by looking at their covers. Yeah I’ll judge a game by its cover. Fuck you. What do I care.

Whoa, I think I channeled Renegade for that last paragraph or something. Okay, so, back on track, Dead Island felt very familiar from the get-go, for a number of reasons. Firstly, it feels, plays and looks extraordinarily similar to Far Cry 2. Far Cry 2 was another one of those games I’d consider good, but nothing too special. Like I mentioned just now, you know how some games (notably first person shooters) tend to just have that not-quite-right feel? When I play an FPS, I expect the controls to be fast, sharp, and completely smooth, but Dead Island isn’t any of those things. Dead Island is definitely one of those games that just feels like you’re playing underwater. Everything is soft and slow and cushioned, which I think is a terrible sensation in any game. It’s like enabling vsync in a PC FPS. Why the fuck would anybody do that? Vsync is disgusting.

So yeah, Dead Island reminded me of Far Cry 2 a lot. It was very familiar because of the way its controls work and how it felt to move/attack and so on. It also looked very familiar, because the textures, scenery and visuals were all pretty damn close to Far Cry 2, as were its animations, and the way that it sort of wrests control from you and engages in an animation while locking you in place when you’re picking up an item, etc. These aren’t necessarily criticisms, by the way. I’m just trying to give you an impression of how Dead Island looks, feels and plays by comparing it to Far Cry 2, which I feel is a very similar game in many ways.

Even the quests and missions and such are similar to FC2, although they’re sort of a cross between Far Cry 2 and Borderlands and many other RPG-like quest-based games. Whatever they’re like, it’ll feel familiar to you. I can guarantee 100% that you HAVE played a game which is very like Dead Island.

And that’s where I’d say Dead Island falls flat a little bit. It’s just not original. I don’t think anything about it is unique, or different, or new. Leveling up works like every RPG ever (the system of upgrading your skills is exactly the same as Borderlands, if you want a recent game as a comparison), the melee combat does nothing which hasn’t been done in exactly the same ways before (disabling/cutting off limbs, etc, has appeared in more games than I can count), the gunplay feels tacked on, and the enemies are repetitive and bland. Yeah, there’s a small handful of “boss” zombies and miniboss zombies and such, but you see them all so many times that they’re just as uninteresting as the regular zombies. 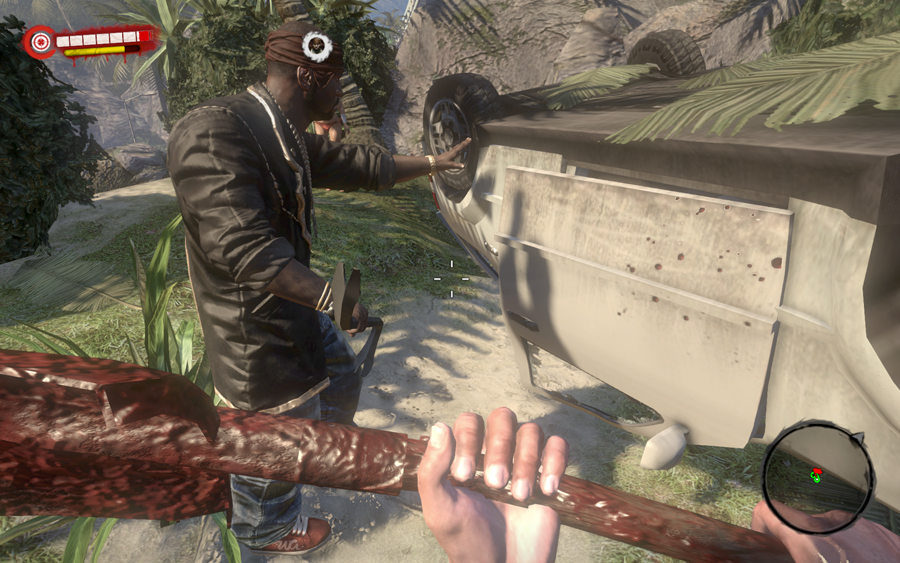 Don’t get me wrong, the game is technically good, and people who love FPSRPGs will go nuts for it, because the RPG elements are by-the-book and straightforward with no surprises. I personally don’t care about the FPSRPG genre, and I primarily got Dead Island because I enjoy the survival horror/zombie genre, and a tropical resort full of zombies seemed like a cool setting. And to its credit, it is pretty cool. But it’s pretty lacking in the zombie department.

I guess it’s a kind of setting which you don’t often see in the zombie genre. It’s a fun environment, with a lot of neat sights to take in and a vast area to explore. I played it with a friend and immediately after we stepped outside of the starting area, we decided to ignore the quest we’d been given and just explore to see what we could find, and it felt fantastic, and limitless. However, after a couple of hours you realize that it feels somewhat empty when you really get down to it. There’s a lot of places that look like they might hold some interesting hidden treasure which turn out to be just another empty copy/paste of the same beach house you already explored ten times before, or it’s a building you can’t even enter at all. Satisfying moments where you actually find something interesting or cool are so few and far between that the exploration eventually doesn’t feel worthwhile. That’s only a minor criticism though, because that’s something I expect from games of the FPSRPG genre. Fallout 3, Oblivion, Borderlands, etc etc, they all suffer from the same thing. They promise a vast world, and they deliver, but it’s only a vast world because they made one small, interesting section and repeated it ad nauseum until you’re sick of it. That being said, I’d definitely add that, out of all those games, Dead Island probably does the best job so far of keeping things a little more varied and interesting. It’s only really the buildings in Dead Island that are repeated, and I suppose that in the setting of a tropical island resort, the beach houses and such would all be the same as each other anyway. It’s not a particularly big deal.

The characters leave a lot to be desired, though. Every NPC in the game feels like a cardboard cutout that spouts emotionless, meaningless lines of dialogue. I cared more about the zombies than I did the NPCs. I thought perhaps the four selectable player characters would have more life and personality given the fact that they have backstories, but for all intents and purposes, they’re silent protagonists. They rarely, if ever, speak, and when they do it’s merely basic positive or negative responses to a lifeless NPC. I also found it a little odd that every woman on the entire island forgot to wear clothes. The fuck is up with that? I mean, I’m not complaining or anything. If every woman wants to wear a tiny bikini and nothing else that’s fine with me.

In summary, Dead Island is a decent game. It’s a fun way to pass some time, you could definitely do a lot worse. It will really appeal to you if you enjoyed Borderlands, or if you enjoy the whole zombie genre, and so on. Don’t get it if you think it’s going to be an amazing FPS or something, because it’s not. The controls are iffy, it feels soft and cushioned (those sound like good words but trust me, they’re not. They aren’t terrible, some people LIKE that feeling in games I guess), the AI isn’t anything to speak of, the story is bland and the people are lifeless. But it does have some fun moments, and it never claimed to be a triple A title. Though anybody who does claim that is a retard. It’s a shade above average, and best played with friends. Playing it solo would get old fast.