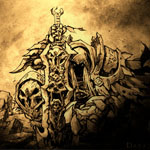 Alright you pack of ignorant fools, it’s time once again for Shepton to lay down some serious wisdom. If you choose to ignore it you can go climb a wall of dicks.

It’s true what you’ve been hearing. Darksiders is literally Zelda with a slightly different appearance. And once again I’m going to remind you that IT IS NOT A BAD THING TO COPY A GOOD GAME. Zelda is a damn solid series of games and they’ve been consistently fun to play, so I take my hat off to anybody bold enough to copy that style straight up and run with it, because that’s what needs to be done sometimes.

If a thing is good, and you want your thing to be good? You copy the thing that’s already good and that essentially guarantees your thing will be good too. If you want to be successful, just copy a successful person in every way! It’s that easy!

“Is this guy for real? Is he being sarcastic?” is what you’re saying, all ridiculously. Ain’t no sarcasm in my tone, fool. I’m being serious. Zelda is good, therefore something that is a lot like Zelda should also be good, and it is. Darksiders is really fun, and it also lasts a DAMN long time. I spent almost 13 hours playing it, and I didn’t even find all the hidden items (and there are quite a lot of them), and that was just on Normal mode. It’s safe to say this game will occupy you for a very decent amount of time and is worth the money.

Alright, so Darksiders is set in a pretty badass, post-apocalyptic world where shit has gone all kinds of wrong. It’s a version of your average biblical apocalypse story, but they’ve taken plenty of liberties. In summary, you have Heaven and Hell, and those fuckers revile each other. They’re at war and all that. But all of a sudden, along comes man, and these special dudes called The Council who are basically deity-type beings are like “Yo H&H, quit this bullshit for a few millennia or you’re gonna kill all these stupid humans” and so Heaven and Hell chill a while because they don’t want the Council to hand them their asses with a side of curly fries. The Council have the four horsemen on their side, and they will destroy any fucker that even tries to get in their way, so Heaven and Hell basically agree to wait until humans are ready to fend for themselves in the Endwar. But something screws up and Heaven and Hell go to war early, all the humans die, and the horseman War gets sent to clean up the mess.

Needless to say, it’s a pretty damn cool setting, what with angels and demons all over the place causing multiple varieties and flavors of havoc. Your main tool that you use to fix everything is a huge sword. You also get a scythe and giant gauntlets. In addition to those primary weapons, you basically find all of the Zelda arsenal throughout the game. You get the boomerang, the hookshot, your horse and so on. There’s also a gun, and a horn that knocks bitches over. Needless to say the combat is relatively varied. Oh, and the portal gun from Portal is in it. Literally the actual portal gun. Fires the same orange/blue portals that work in exactly the same ways. Valve could probably sue and win.

There’s an upgrade and grinding system in place where your primary weapons level up the more you use them. It takes a while, so if you want to beef them up you have to put some effort in. It’s not going to just give you the ultimate weapons on a plate, you gotsta earn that good stuff. Oh, and there are like 16-20 slot items you can attach to your main weapons that all do different things. I thought that was a cool feature.

There’s plenty of capacity for exploration. There’s a whole ton of hidden chests with upgrades and items in them, all of which are actually really useful. For instance, most of the hidden items in the game can be sold to the shopkeeper for souls, which are your currency, so it’s not like you’re finding them JUST for the sake of completion, they actually help you to afford the really high-end upgrades and attacks you can buy at the shop.

The combat is amazing. It’s really well done. I mean, it’s not like Bayonetta or Devil May Cry grade combat, but for the kind of game it is, it’s absolutely exquisite. First and foremost, it makes sense. You’ll never have to stop and think about something, it simply does what you tell it. You press a button, you know what’s gonna happen. Not only that, but it’s really satisfying. The moves all have this over-the-top, unnecessarily-violent feel to them, which is most assuredly a good thing.

The controls and movement are good too. It all pretty much feels right. The only minor issue I had with it was the aiming of the boomerang and hookshot and gun and such. It can be a little slow and clunky at times, especially since you have to click the right stick in to activate manual aiming, and click it again to return to normal. It’s a little unwieldy and can lead to clumsy mistakes happening. Luckily it doesn’t affect you TOO much, but there was one boss fight in particular where it felt like a huge hassle. Oh, and while on the subject of boss battles – if you have to make a boss difficult by adding infinite waves of regular enemies as a distraction, it’s a terrible boss and you should scrap it and start over until you can make it challenging WITHOUT needing to add waves of regular enemies. That’s just annoying. Come on, you can do better.

The dungeons are pretty fun. They’re exactly like Zelda dungeons – you even find a map and compass in hidden chests in each of them.

Anyway, I guess I’ll briefly sum up the other minor things. It has good voice acting, a really cool art style (imagine if World of Warcraft looked good instead of completely fucking retarded and kiddy) and the design throughout is really good, in terms of characters, weapons, areas and so on. Oh, it also has a really cool feature that tells you all the little details, like how many enemies you’ve killed, how many miles you’ve run, how many gallons of demon blood you spilled, how long you’ve spent in combat and out of combat, etc. EVERY game should have something like that. It’s nice to know.