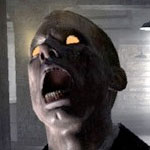 When I was a kid I was a huge fan of World War II FPS games, but the more I played them the more I realized they were all the same and they quickly became boring and I avoided them from then on. When I heard that CoD5 would be set in World War 2 I was disappointed, especially after experiencing CoD4 (set in the present), which to this day is my favorite FPS game and in my opinion the best FPS game currently available.

Still, my spirits were lifted when I learned that it was to use Call of Duty 4’s engine and gameplay, though it wasn’t really enough to make me look forward to or care about the game. Even if it was a reskinning of my favorite FPS, it would still have crappy, old, boring World War II weapons, rather than the high-tech, rapid-firing, rapid-reloading, grenade-launcher-attachment-having laser-scope guns I’d become so enamored with.

So, I added Call of Duty: World at War to my online game rental service. 6 months later it arrived, and I played it.

I instantly got the impression that Treyarch are nowhere near as intelligent or innovative as Infinity Ward. Where Call of Duty 4 had a fun time-trial challenge to introduce you to your squad and the game and its controls, CoD:WaW instead throws you directly into confusing combat at night in Japan, where you’re a prisoner of war who gets rescued by a random squad of soldiers. You pick up a gun and have to start firing almost blindly into the night, because there are some Japanese soldiers out there, or something. And from a distance in the dark, they look very similar to your own guys. I found that part of the game a little bit disorientating. 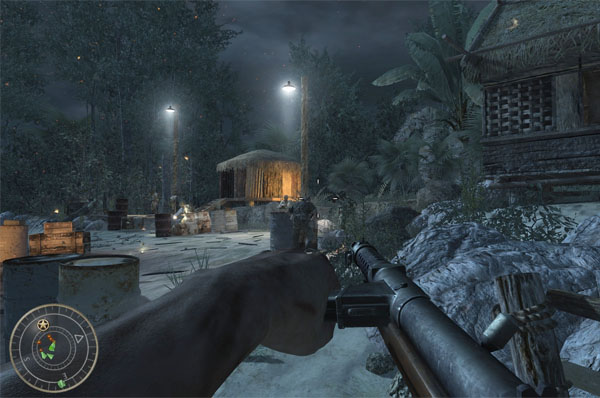 World at War also commits a very, very grievous, unforgivable sin when it, like many WWII games before it, copies scenes directly from Saving Private Ryan. How many fucking times are we going to see soldiers getting out of landing craft when storming a beach only to get shot in the sea? HOW MANY FUCKING TIMES? It was good in Saving Private Ryan. Now let it go.

It also copies plenty of other WWII games that came before it by using old black and white WWII footage to make it seem more authentic and “real”. Yeah, it still doesn’t work, and I’m pretty sure everyone is bored of seeing guys getting shot in black and white with those wavy little old-timey camera lines and dots flickering on the screen. It’s been done, okay? Really done. Please just move on. If you’re going to make yet another World War II game, you could at least TRY to do new, different things with it. Please? I am literally begging you, game developers. I won’t make you laugh by trying to ask you to stop making WWII games because that will never fucking happen, but I will at least ask you to try your best to make them new and different. 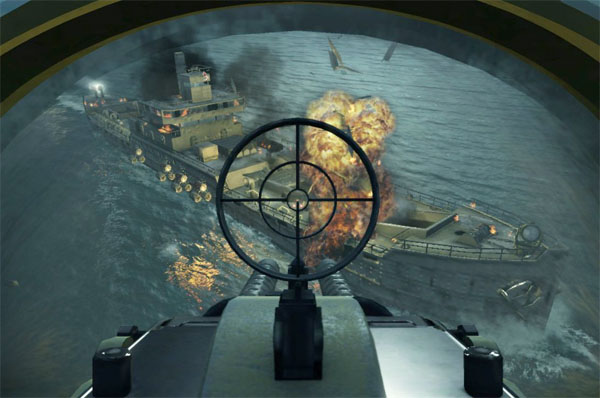 You’re probably wondering why I gave this game a grade as high as C- when all I’ve done is trash it so far in this review. Well, frankly, the gameplay isn’t bad, because it’s CoD4’s gameplay, which was excellent. Sure, WaW dumbs it down a little and the guns are all a lot less accurate and a lot less fun, but the controls are all correct and the movement and physics are still pretty much on the ball, which saves it a little.

The more I played through the game the more I enjoyed it, though. I guess there’s a learning curve and once you know the game everything seems to make more sense. But still, the only reason I like this game is because it is Call of Duty 4. It borrows not only the game’s engine, but quite a few of its levels, too. Only it never does them quite as good. The only new things are flamethrowers and tanks, which Treyarch put a lot of emphasis on, because they’re literally the only things they added. Granted, flamethrowers and tanks are obscenely fun. Oh, I guess they also added zombie mode, which is pretty fun if you have friends.

Treyarch were wise however to take influence from Call of Duty 4’s sniper level, but they didn’t do it quite well enough, and chose to instead make it only a few minutes long and much less intense.

From all of this I can only conclude that Treyarch employ not human beings but instead some strange species of leech that feeds upon ideas. Preying on the innovations of others, these idea leeches (Hirudinea Sententia) shit out chewed up and digested versions of videogames you’re familiar with and receive 9/10 scores from websites such as Gamespot, IGN and all those other corporate mouthwhores with their-

But, I digress, and fear that men in lab coats are coming to visit me with strait jackets and as such I must end this review in a desperate attempt to shovel earth back into this large hole that I’ve been digging for myself.

Final play time: Around 8 hours, give or take.

Someone get me some aluminium foil. They can hear my thoughts.