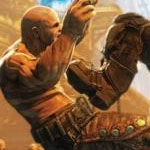 People Can Fly are quickly becoming one of my favorite game developers for one simple reason: Their games are fucking fun. Their latest game, Bulletstorm, is no exception. Its premise: Kick people in the dick. It’s a simple premise, sure, but god damn is it a fun one.

With all the hype Bulletstorm was getting, I was expecting it to be one of those soulless games that sells entirely based on its advertizing and not the merits of its gameplay. I was delighted to be completely mistaken.

To put it simply, Bulletstorm is fun as all fuck. Subtle it ain’t, but fun is its forté. This is a game where you can whip a dude around the neck, drag him through the air towards you, fire a remote-guided sniper bullet and control it to make it enter his god damned asshole, then fly him into three of his friends and explode them all. Oh, and then maybe you could kick a straggler into a cactus or an industrial fan, or fire a drill into his chest and launch him into a lightning storm or something. It’s your call. I’m not one to judge if that’s more your thing.

These things I’m describing to you are called Skillshots. They’re creative, inventive and fun ways to kill enemies. You get points depending on the difficulty of skillshots you perform. You can spend those points to upgrade your weapons and buy ammo. It’s a decent system, because you’ll always need ammo, so there’s incentive to go for the best skillshots you can in order to get the most points possible to keep your guns firing. There’s also a handy chart with a list of all the possible skillshots in the game that you have to unlock as you progress. Some tell you how to achieve them, but plenty are secret and you have to figure them out for yourself, which encourages creativity and exploration.

Skillshots are the crux of the game. Some would call them a gimmick, but I’d have to say those people can shut their cock holes. A gimmick is only a gimmick if it’s shallow or superficial. But this shit is fun as fuck. That makes it graduate from a gimmick to an entertaining and legitimate gameplay mechanic.

Every kill is ridiculously fun and satisfying. Discovering and unlocking new Skillshots, whether by accident or on purpose, is always a sweet feeling. There are lots of “Ohhh shiiiiit” moments when you fuck a dude up in some hilarious new way, completely by chance.

Adding to the fun is a combination of humorous writing, excellent dialogue and perfect voice acting. Any game that includes the phrase “Here comes Butterdick Jones and his heavenly asshole machine” deserves to be lauded for its brilliant sense of humor. Here’s some examples:

Which I guess brings me onto the characters. Again I’ll stress that “subtletly” is not in Bulletstorm’s lexicon. The people of Bulletstorm are vibrant to say the least. No, the characters aren’t especially deep or involved. They’re just basic, archetypal. But I don’t mean that as a criticism. This shit works. It’s GOOD that they’re on the simplistic side. It makes it so much easier to just sit back and enjoy the way they interact with each other. There’s no onion layers here. You peel off a layer of Gray’s onion and you find more drunken space pirate. It’s fantastic.

The story relies heavily on fundamentals, too. Your protagonist has been wronged by the antagonist and is out to right that wrong no matter what the cost. Friends get hurt along the way, protagonist feels bad, wants to atone, yadda yadda. It’s nothing new, it’s just simple. And I can’t wait for the day when everybody realizes that simple is good so I can stop repeating myself in my reviews. Games that try too hard to make a complex plot always turn out like Final fucking Fantasy: Retarded and frustrating. There is absolutely nothing wrong with sticking to concepts that are tried and tested. Every now and then a movie will have a kickass, original plot and make a big impact and everybody goes crazy about it. Shit like Fight Club or Usual Suspects for example, or Memento. It’s cool, right? Those movies are awesome, and pretty unique. But when a game tries to do the exact same shit that’s not good. Who the fuck didn’t see Black Ops’s twist coming? You can’t copy an idea like that and make it compelling and cool. It’s lost its kick after the first time it’s been done. But the basic, age-old tale of an underdog protagonist fighting a huge evil force is always compelling. Case in point: the original Star Wars trilogy was fucking brilliant. Luke taking on Darth Vader. The Rebel Alliance fighting the Empire. But the NEW Star Wars films? Who the fuck even knows or cares what was happening in those?

Now what I’d like to talk about is the visual style and artistic direction. The overall appearance of the game is the unreal engine again. It’s Gears of War in a tropical paradise planet, only unfortunately you don’t see too much of the paradise and have to spend most of the game in buildings and underground tunnels and shit like that. Don’t get me wrong, it looks good, but man it’s beautiful when you’re outside on a cliff overlooking a stunning paradise beach with a sunset going down and cliffs all around and palm trees and bright, vibrant colors, and some cool huge machinery maybe on the other side of the beach that looks ominous. It has a few really awesome views, and the planet the game is set on leads to some great, quirky and fun backdrops. There’s collapsing buildings to fight your way through, a couple ruined city streets, a sweet arboretum area that’s overrun with mutated plants. It’s pretty varied. But it’s so obviously on the unreal engine. It just has that look. In fact I’m pretty sure Gray wears Marcus Fenix’s actual armor. Like they didn’t actually design a new character, they just put a different face on Marcus Fenix’s Gears 3 model. I’m seriously sure that it’s genuinely the same god damn armor he’s wearing. I mean, I don’t mind much. It’s cool armor and it’s first person view so you don’t even see it often. But still. They coulda been a little more creative.

Bulletstorm also has a pretty decent multiplayer mode called Anarchy. Essentially this is a co-op clusterfuck where you have to work together not to survive a horde mode, but to beat the score limit of each round instead. Unfortunately the difficulty is a little skewed. There’s 20 waves, but you can get to wave 18 without really trying particularly hard. You realize very quickly that the simple trick to it is to all finish off each other’s enemies to turn a skillshot into a “team” skillshot which gives more points. For instance, you can kick an enemy and then shoot him while he’s in the air for the skillshot “Bullet kick”, which is like 25 points or whatever. But if you kick the guy and a friend shoots him, you get “Team bullet kick”, for 125 or some such. It’s really not too hard to milk every enemy for more points than it would normally be worth with the most basic element of teamwork.

Unfortunately Anarchy mode just doesn’t have much staying power. Once you’ve beaten wave 20, that’s it. Anarchy mode over. Do you really wanna do it again? Not particularly. Just did that. Wanna do something different now. It tries to give the mode more depth by allowing you to earn more customization options for your character, like different helmets and color schemes, but does anybody really care about that enough to spend weeks grinding through 20 waves of enemies over and over? Just so they can have a slightly different helmet to their friends when they play? Of course not. People that care about shit like that don’t HAVE friends.

Anyway, Bulletstorm is a fine singleplayer experience. It’s relatively unique, definitely entertaining and will make you laugh at least a few times if you aren’t some turbofaggot who’s dead inside, and has enjoyable, satisfying gameplay. The multiplayer will give you something to do for a weekend or a few evenings, but I found it got old fast. I have to admit, the main reason I bought Bulletstorm was to get access to the Gears 3 beta, but I was happy that I got a lot of enjoyment out of it. It’s worth it even without the Gears beta, but just keep in mind that it’s not the sort of game that most would want to play more than once. I’m glad I bought it, but I think for most it might be more of a rental-type experience.