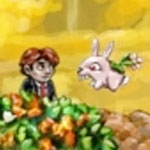 I must confess to being out of the loop when Braid was in development. The first time I heard about it was when an awful lot of forum-dwelling rejects were complaining about $15 being too hefty a price tag for the game. I assumed at first that it must be a pretty lackluster game if $15 was too high a price to pay for it, but, my interest piqued, I did some research, and bought some Microsoft points.

The game’s high quality is apparent from the very moment you begin. Its art direction is superb; bright and beautiful, yet strangely twisted worlds and an eerily calm soundtrack are present throughout the game and are a treat to the eyes and ears. The game’s story, revealed in segments at the beginning of each level, is ripe with intrigue, revealing only hints of a deeper, darker story, which is never explained in its entirety, leaving much to the imagination and interpretation of the player. While such storytelling choices often only serve to frustrate players, I found myself very satisfied after completing Braid. I won’t go into any detail on my theories about Braid’s story and ending, but if interested you can read this summary and basic analysis. Braid’s defining characteristic is its time-altering gameplay mechanic. You begin with an ability to rewind time. This ability allows you to correct mistakes, until you are able to perfect the series of movements necessary to beat the level. At first, this feat seems quite simplistic and easy to comprehend, but you soon realize that its potential for puzzle-solving is mind-blowing.

Each world has its own additional time-bending ability which adds to the depth and complexity of the numerous puzzles present in Braid, from a time-slowing ring, to a shadow of yourself that will repeat your movements. All of these abilities will impress and confuse you, and then impress you again. Some of the puzzles can be hard to get to grips with, and several will probably make you want to kill yourself when you just can’t fathom how you’re supposed to open BOTH doors with that key. Braid isn’t without its flaws, though. It’s tragically short with only a few hours play time at most, and very little replay value. While these traits are extremely disappointing problems that are apparent in most games, I can overlook them in this case, as Braid didn’t have a huge, multi-million dollar development team working on it. It’s made by one guy. Okay, he didn’t do the music or the art, but he developed the game and funded it himself.

My feelings on the game as a whole are that it’s truly eye-opening and should be an inspiration to other developers, independent or otherwise. Take note, Nintendo. This is what real innovation looks like. Speaking of Nintendo, I guess I’ll point out the incredibly obvious parallels that this game has with the classic Mario games. First of all, it’s a platformer. Second of all, you defeat Goomba-like enemies by jumping on their heads, and piranha plants attack you by moving up and down out of the ground. Third of all, you’re looking for a princess. Fourth of all, that princess is in another castle. None of these points are bad things in the slightest. Braid has tapped into a simple formula that works incredibly well, and adds some very challenging and clever puzzles into the mix.