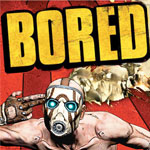 Borderlands is bland. I mean, it’s right there in the name. Bored Erlands. I was excited about and interested in it at first, but when I started up my first game my eyes became blurry and stopped even trying to focus, because I saw the same dull-as-shit setting that bored me in Fallout 3, in Red Faction: Guerilla, in Mass Effect, and god knows how many more.

You’re in a wasteland with no redeeming features, on some bumfuck, backwater, redneck planet that nobody gives a shit about. Despite having about thirty different (and enormous) areas, the developers didn’t even consider trying a little variation. Every single area is a clone of the last one.

For the first half of the game, you fight only bandits and skags. These are shitty, gay little enemies that you won’t give a fuck about. They bare no relation to the plot of the game and they’re just there to be a frustrating little obstacle to get rid of so you can just complete the hundreds of equally boring “go here, collect this, come back” quests. For the last half of the game, you also fight bandits and skags. And occasionally some things that are equally as annoying as skags called spiderants and scythids. It’s all the same old shit.

They marketed this game as some amazing amalgamation of FPS and RPG genres, but they got completely the wrong idea. They took the worst aspects of both genres and hashed them together into this abomination.

Okay, I’m being harsh right now. It’s not a bad game at all. It’s relatively enjoyable, especially if playing with friends. But that won’t stop me from ripping on how incredibly unimaginative and lifeless it is. The game never once attempts to create any emotional connection with the player. You’re on a shitty planet, and some bitch appears in your mind and starts ordering you to do things because apparently there’s a “vault” here. And it’s apparently real. You have absolutely no reason to do ANYTHING in Borderlands and you’re simply doing shit because some daft bint in your head is telling you to. It should go without saying that the game is extremely linear.

I’d say spoiler alert, but there’s nothing about this game to spoil as it doesn’t have a story. Here goes: I’m sure you’ve already figured out that the vault is in fact real, because myths and legends in RPGs always are real. At the end of the game, you find the vault. It opens off-screen (you never see it). A big monster apparently comes out. You kill it and the credits roll. YOU DON’T EVEN GET TO SEE WHAT’S IN THE FUCKING VAULT. A fucking retarded monster that I killed by STANDING STILL AND FIRING MY GUN UNTIL IT DIED appeared without ANY explanation and THAT’S. FUCKING. IT. This is BULLSHIT. Writers should not be allowed to get away with stupid shit like this. This is worse than Final Fantasy. At least FF games give stupid, meaningless explanations. Borderlands gives none because it doesn’t even have any narrative. There’s almost no story at all. You’re here, there’s a vault, fight thousands of the exact same enemies until you get there, CONGRATULATIONS YOU’VE WON.

Just NO. Okay? FUCK you. This isn’t right. How can you call that writing? Get CANCER and DIE and go to HELL you lazy bunch of HACKS. I can write a million times better than you and the last three paragraphs I’ve written contain the word “fuck” at least 5 times.

[Do you see what I’m doing here? I’m setting up my next point of discussion by suggesting that all the playable characters are basically the same.]

[It strikes me that you lack discipline.]

There’s very little unique about any of the characters. They all have a skill which doesn’t do anything of particular worth. The Berserker punches things a lot, the Hunter throws a bird, the Siren turns invisible and causes a weak explosion to go off… none of it really matters. It doesn’t make any difference in the actual gameplay. If anything though, the Berserker is the best because his special ability does the best damage out of all the classes and punching motherfuckers is fun.

I mentioned this before, but I would like to come back to it. The final boss in the game is retarded in every possible sense of the word. Not only is it completely unexplained and random, but I defeated it by literally standing still and holding down the trigger and it never hit me even once. This is fucking stupid. I am honestly not kidding. I didn’t move. I just held down the trigger until it died and it didn’t hit me once.

In a piss-poor attempt to add longevity to Borderlands the devs tacked on a New Game+ option that lets you start a fresh game with your high level character and all your existing stats and items, but this time the enemies are higher level too. It doesn’t make a bit of difference because they’re still just as horrifyingly easy. Oh, also, they change the names of all the enemies. It doesn’t make any difference at all, but I’m sure it made the developers feel slightly better about the amount of times they hit copy/paste throughout the development cycle.

Nothing more to say. Shit game, who gives a fuck.