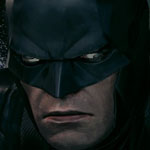 How the fuck did I invest 50 hours into this? Obsessive disorders?

So, here we are. The latest installment in the Batm’n games. And it’s basically the same as all the others! It’s been a long time since I played Arkham City, and I skipped Origins, so my memory is somewhat fuzzy, but Knight feels largely identical to even all the way back to Asylum, the first game in the series. The controls feel the same, the look is the same, the problems you’re solving are essentially the same, the combat is the same. Obviously there are a smattering of new or updated gadgets and functionality, and I definitely don’t remember the Batmobile being as big of a deal in the previous games, but yeah. It’s more of the same.

I’m a broken record at this point, but I’ll repeat myself again: more of the same is a good thing, providing that the thing you’re giving us more of was good in the first place. And I would say that the Arkham games are… above average, for sure. Maybe getting a little stagnant at this point, though. I was hoping that certain elements would have taken some longer strides by now. For instance, the combat is still fairly dull and repetitive. Ultimately you’re going to mash X a ton and occasionally hit Y. Yes, there’s more to it than that (or at least, there can be more to it than that) but the game offers no real incentives for learning to get better with the combat system, and never offers enough of a challenge to make it a necessity, even on Hard mode. 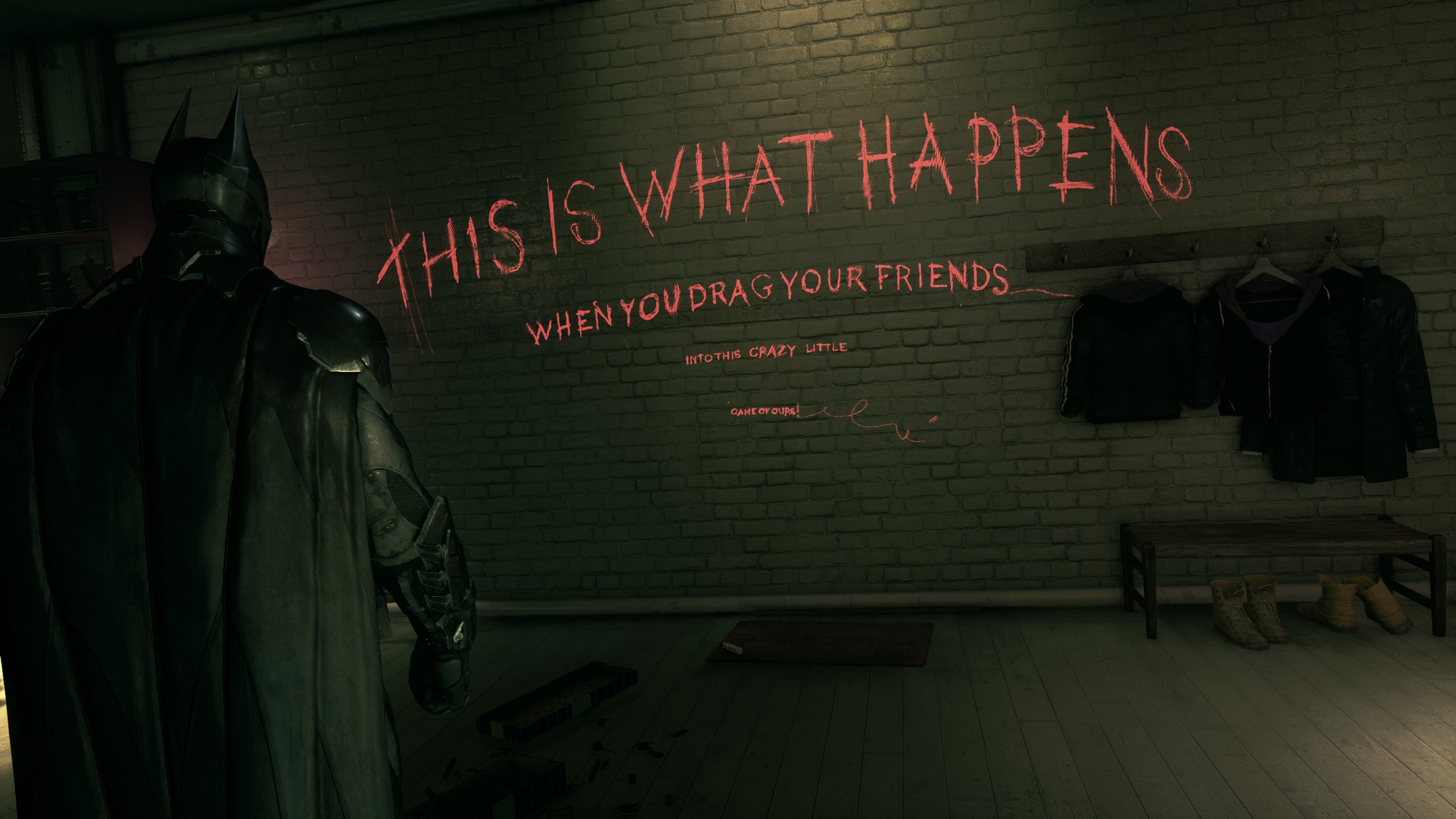 It begins to open up a little as you get further into the game because you gradually unlock more gadgets which lead to more combat options, but all that really does is allow you to disable a couple enemies for a while, so that you can go back to mashing X on one guy while the other is frozen in ice or electrified. Disappointingly, like so many other games, Arkham Knight’s method of increasing the difficulty is to throw more enemies at you, instead of making the individual fights an actual challenge. All this does is make fighting a chore. I found myself enjoying everything else about the game much more, and imminent combat only gave me feelings of impending boredom. Which is truly sad, because Knight has so much potential with a lot of its plot and missions, and it chooses to turn every mission into a big fight, when it could just as easily have leveraged so much more of the detective and stealth aspects instead.

And that’s the theme of this review – missed potential. This entire series of games had SO MUCH potential. It has a fantastic IP to work with, with a cockload of characters and relationships and locations and stories to draw from. Batman is the “world’s greatest detective” and yet the vast majority of the game is reduced to brawls with dozens of thugs, or shuffling left and right in a tank restricted to a small area, shooting at other tanks. The parts of the game where you actually have to utilize Batman’s deductive capabilities are tragically few and far between, and almost always can be solved in the same few ways, such as blowing something up, or simply turning on detective vision so the game can spell it out for you and then you walk up to the solution and press A and have another massive brawl.

Knight probably has the most variety in its monotonous, repetitive tasks when compared to the previous Arkham games. A list of your day-to-day Batman activities is as follows: 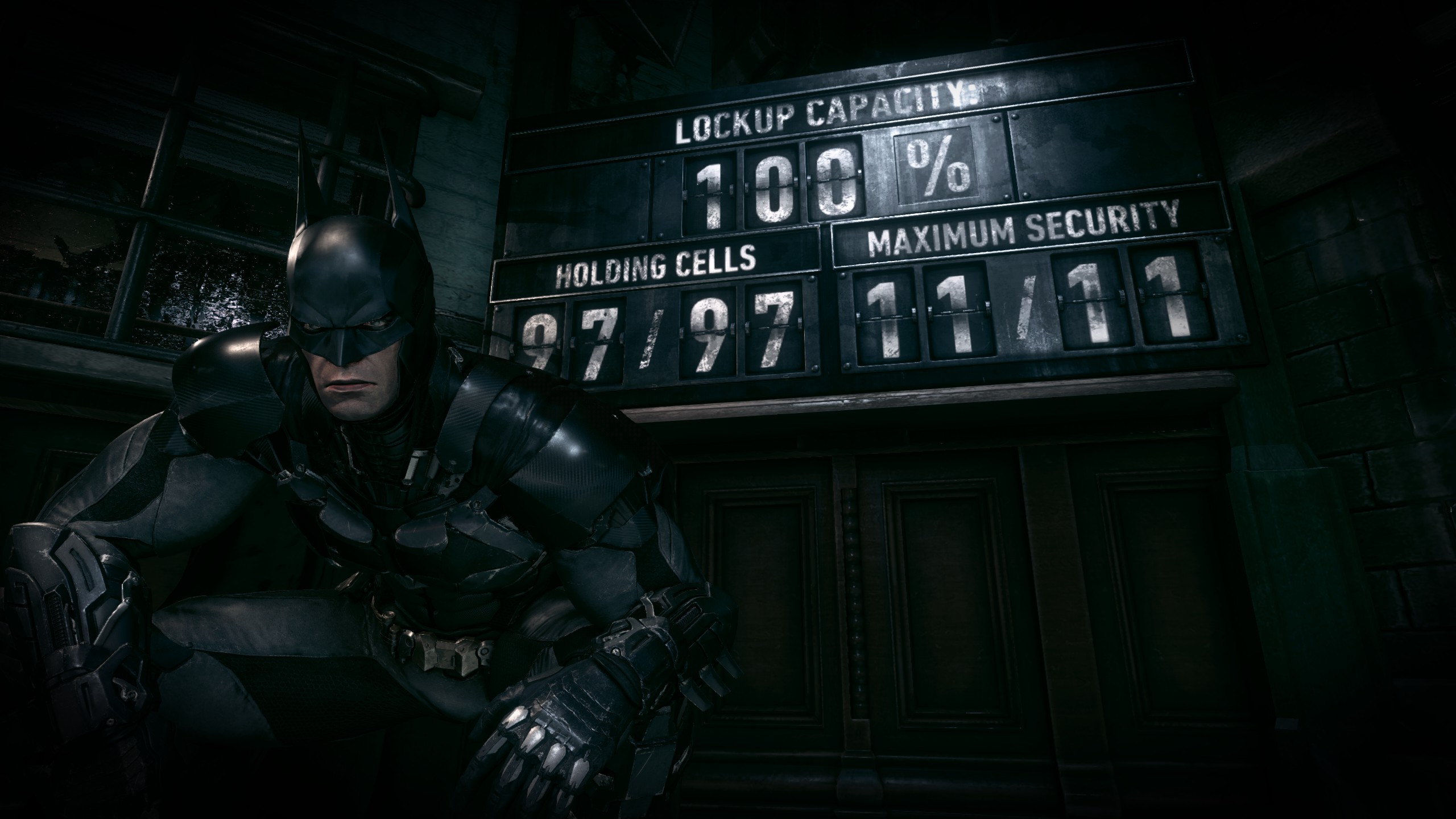 You feel me? As varied as it seems on the surface, almost everything you can do throughout the game boiled down to the same basic shit. And there’s SO MUCH of it. You would get the same exact value out of it if you only had two of each of those tasks, rather than 20+ of each of those tasks doing the same exact thing over and over. The bomb disarmament thing – it wasn’t needed. You already have to fight dozens of tanks with your Batmobile countless times in the main story, so a sidequest where you do that exact thing twenty more times wasn’t fun or new or interesting. It becomes a case of checking things off a list for the sake of completion rating, rather than actively seeking out the content because it’s an enjoyable experience.

I have the same issue with the Riddler trophies. There are just SO god damn many of them, and almost all of them are zero-effort affairs, and the ones that aren’t immediately accessible are usually hidden behind a solution as simple as using one of your gadgets on it. But there ARE quite a few really good, fun Riddler puzzles throughout the game that people clearly had a lot of fun making, and a lot of thought went into, and are genuinely satisfying to figure out. Personally I think it would have been better to go with quality over quantity here – rather than 250 trophies/puzzles, why not just set a hard limit of a hundred, or even fewer, and invest time and effort into making them a challenge to obtain? Maybe it’s just me, but I think that’d be a lot more satisfying for the player.

But yeah, this is the modern era of gaming. Copy/pasting and consolidating and streamlining are the theme of the age. Quantity takes precedence over quality. Everybody knows all gamers want is a checklist to keep themselves busy. We don’t want art, we don’t want critical thought, we don’t want skill. We just want a distraction, for as many hours as possible!

You’ll be happy to know that my major criticisms of the game end there. From here on out, it’s all positive. Shepton’s turning over a new leaf, baby! It’s happy feels all the way! 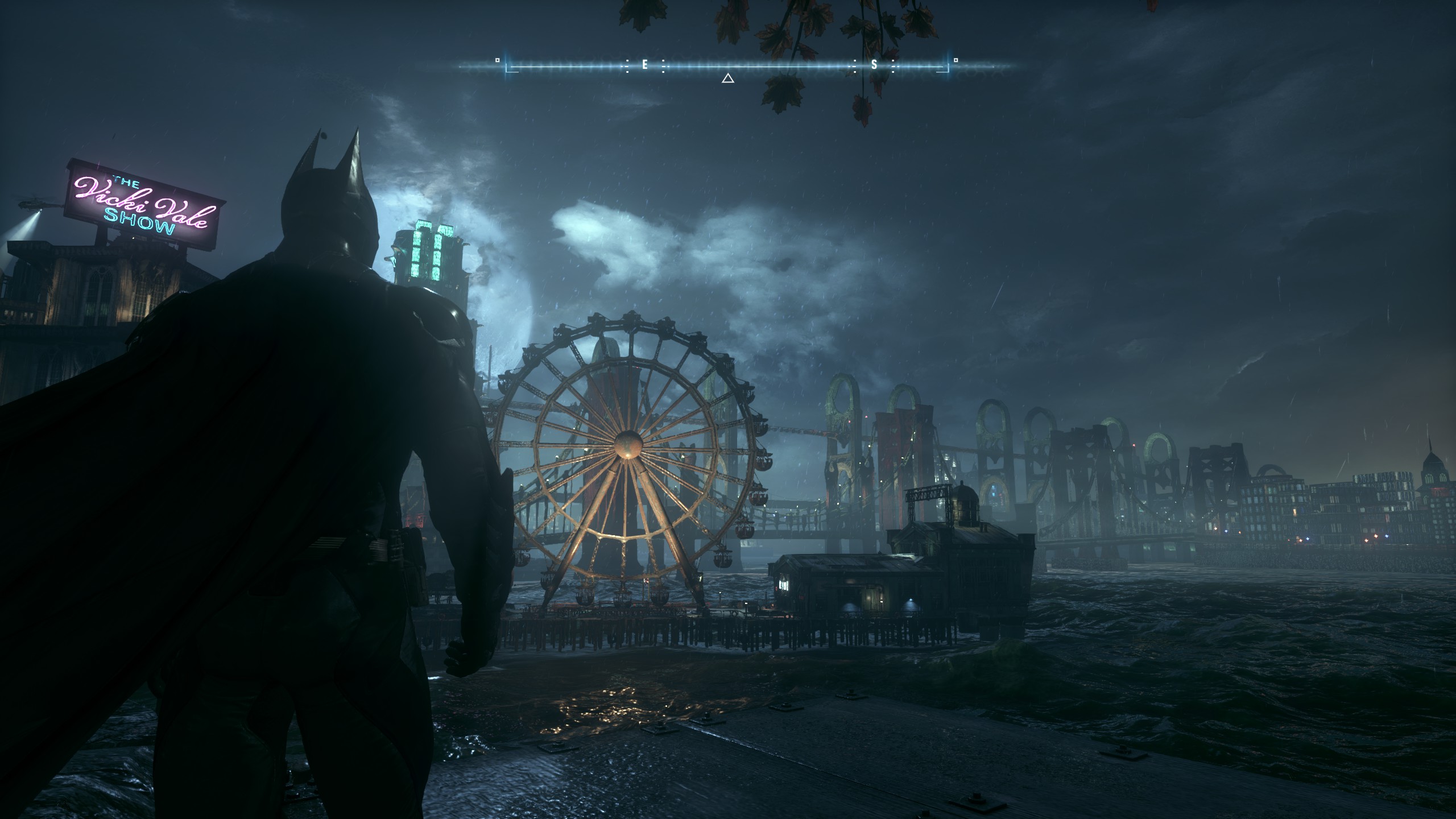 Arkham Knight does a solid job of presenting a Gotham City that feels like you’d expect. An aging, crime-ridden place, filled with the gothic architecture from a time long passed. It feels like a relic of a city that’s on its last legs, and people like Bruce Wayne are trying desperately to keep it on life support. The fire department and police are overworked, understaffed, and close to giving up. That’s what Gotham’s always been. It’s what it needs to be. They got it right, and they did it not just with the appearance of the buildings, but with the characters and the dialogue. The narrative works just as hard as the aesthetic to present you with a believable Gotham city.

And while on the subject of narrative, this was quite clearly a labor of love by people who genuinely care about the Batman story. The characters are all deeply rooted in their comic book origins, and stay very true to the source material. I briefly mentioned in another post how this game plays with your perceptions a little, like Arkham Asylum did with its Scarecrow sections. I think Arkham Asylum was a lot more impactful in that regard when Batman’s head was being messed with by the Fear toxin, but Knight takes a different route. Rather than being directly screwed up due to the affects of a drug, this time Batman is dealing with the long-lasting side effects of past events involving the Joker. As a result, you’re constantly dealing with hallucinations of the Joker himself. It toys with the old Batman trope of him and the Joker “needing” each other. It makes for a lot of interesting moments, and it’s always fun knowing that the whole situation makes Batman an unreliable narrator. You’re experiencing everything through his eyes, but he’s got some severe mental problems and what he’s seeing may not even be correct, and I personally love that. It’s what I loved so much about the Scarecrow sections of Asylum. It uses mental instability and altered perceptions to give the player a really fun experience, which at some points can be shocking and even scary. I can’t go into detail without spoiling it for anyone who hasn’t played it, but the culmination of the Joker/Batman aspect of the story is intense, satisfying, thrilling and, above all else, fun. 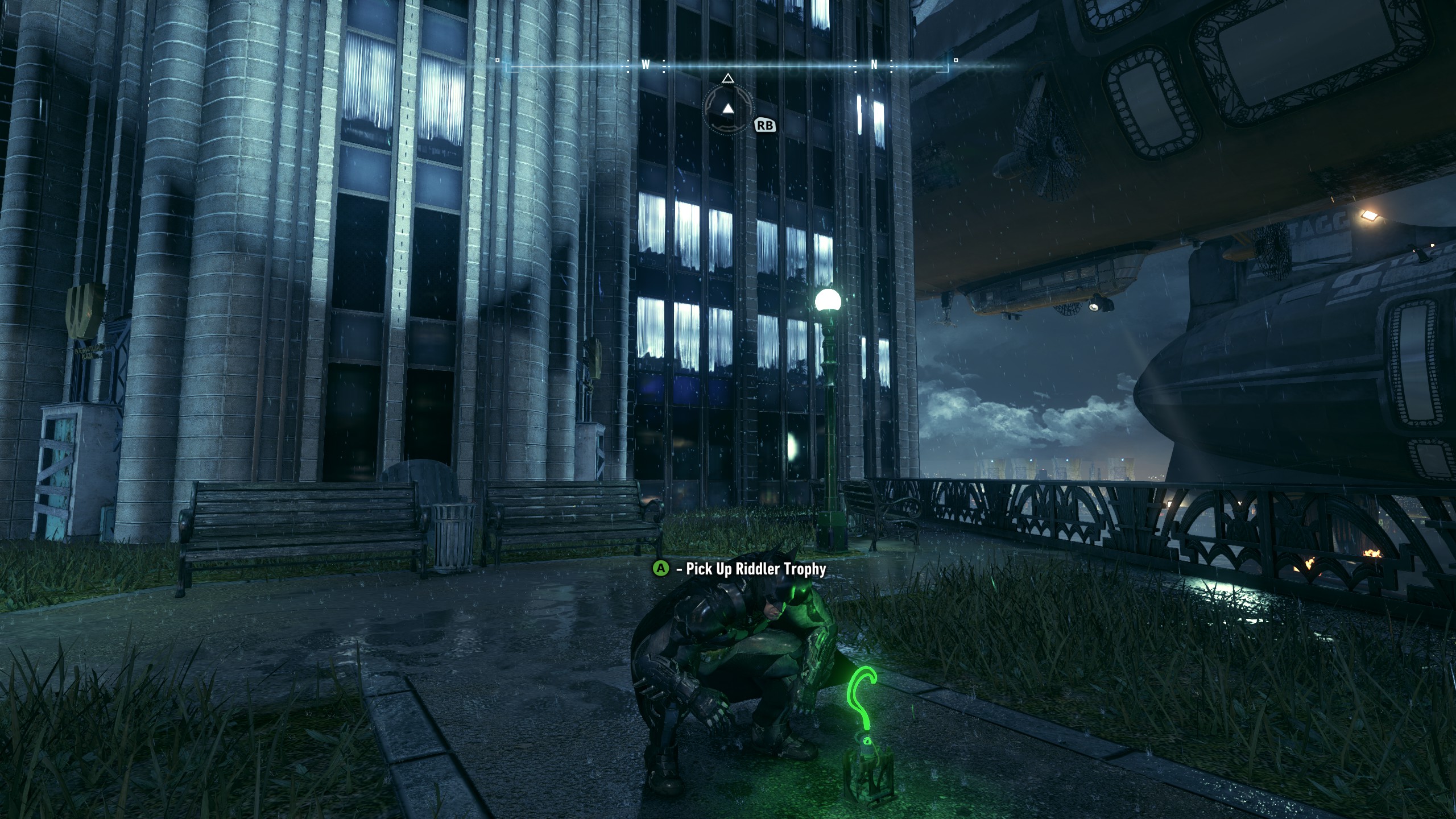 For a fan of the comics, Arkham Knight is a giant playground of Batman history and fanservice. From a gameplay perspective, it’s kind of a clusterfuck of repetition. My preferences tend toward refined experiences that know what they are, have a story to tell, and tell it. This game has ten thousand stories to tell and Batman has to live through them all in one evening. As a fan of the comics I found it difficult to swallow that in one night Batman fought the majority of his rogues gallery and apprehended them all, locking all of these dangerous criminal masterminds into one single, ordinary prison cell together. It seems excessive and unrealistic, even for a comic book superhero. Or at least, for this particular superhero, who is typically more grounded in reality and less about the super duper magic powers.

Overall, I had a lot of fun with Arkham Knight and invested a bunch of time into it, if only due to my obsessive completionist nature. It’s a great comicbook story, with a tragic lack of depth in its actual gameplay. Excellent narrative and solid presentation are the enjoyable-but-superficial mask plastered on top of a bloated mess of collectathon content taken to wild extremes.

I noticed I gave Arkham Asylum a B+ all those years ago. Either I’ve grown tired of this series, or I’ve become jaded, or I’ve gained more perspective and have more games of a wider range of qualities to compare it to in terms of what I think its grade should be. Or all of that. Probably all of that.

This game was good enough that I played it a fuckin’ ton more than most people would ever play a game of this genre. Purely for superficial reasons though – I just wanted to see the ending, and the ending was locked behind 243 Riddler trophies in an annoying collectathon. And I took my time about it because I enjoy the DC universe and the game is pleasant to play. Flying around Gotham is genuinely fun. Driving the Batmobile around is decently fun too, though incredibly arcadey and often dumb, with its lack of physics and shopping cart 360 degree four-wheel turning.

Oh, right, shit – I forgot I promised I’d talk about the clusterfuck that was the PC release of this game. It was a goddamn nightmare. Even high end rigs could barely make 30fps and they’d struggle with that. There were issues of crashing and all kindsa shit. People refunded the HELL out of it on Steam to send WB a message. I guess it worked, because they pulled the game down from Steam for months and did eventually patch it. I waited until it was playable before picking it up in a sale (no way am I paying full price for something that was so badly botched and unreliable), and can say from personal experience that it ran smooth as butter on my PC. But when it comes to PC hardware I’m kinda in the 0.2% so… take that with a pincha salt I guess.