I wasn’t expecting much from a superhero game. Let’s face it, good games from the Marvel and DC camps are incredibly few and far between, and even the better ones are only good in comparison to other superhero games.

Batman, however, makes an incredibly solid effort. From the very beginning the game sets its tone and builds tension, a feeling which stays with you for quite a long while as you progress through the story. I spent the first half of the game progressing cautiously, afraid of which Batman villain I might run into next.

I was relieved that the game seems to focus on Batman’s best assets – the fact that he’s the world’s greatest detective, the grungey darkness of Gotham, and the relentless, unrepentant, murderous insanity of his foes. It all seemed very true to Batman’s style in terms of setting, story and physical appearance. Speaking of appearance, Arkham Asylum’s visual style is a blend of both exaggerated realism and comic book art, which results in a very fitting and gritty look. 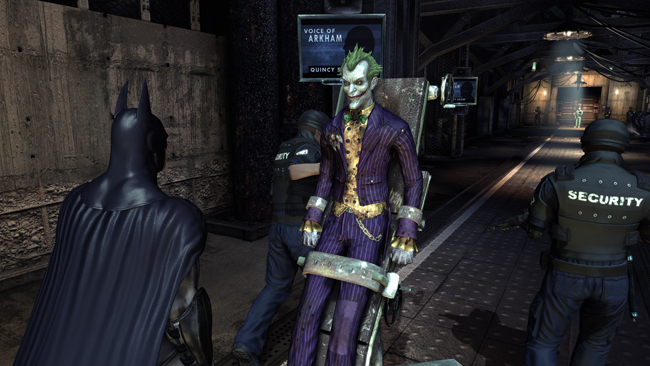 There’s an incredible amount of detail in the game, and I don’t just mean visual detail. There’s a large bank of information on many characters from Batman’s past, complete with very attractive artwork and detailed yet easy-to-read biographies. It’s a little something for hardcore Batman fans to get their nerd-on over, and provides the need-to-know information for those who are less familiar with Gotham’s Dark Knight. The best part about those biographies, though, is finding them all.

Most of the biographies are obtained by solving puzzles and finding trophies left around Arkham Island by The Riddler. There are a total of 240 hidden trophies and riddles around the asylum, and finding them is both satisfying and fun, and a lot of them will fill fans of Batman with a lot of nostalgia. For instance, finding Scarface in a glass case inside the warden’s office, or seeing the Ratcatcher’s gloves and gas mask tucked away in an air vent. The secrets are all a little easy to find, though, which is a shame.

Truth be told, the entire game is very easy, but I let that slide since the gameplay, story, setting and characters are all just so damn good. I only have a couple of gripes about the game. First, the combat is boring and repetitive. Every combat sequence in the game involves the same three or four kinds of thugs that will never be able to kill you and may as well not be there as they’re only filler. You press X a bunch of times and they all get knocked unconscious after a while. Its really dull and takes absolutely no effort. However, it can at least be a little satisfying at times. The stealth combat, though, makes up for the bland regular combat. I’ll talk more about the stealth aspects of the game a little later. 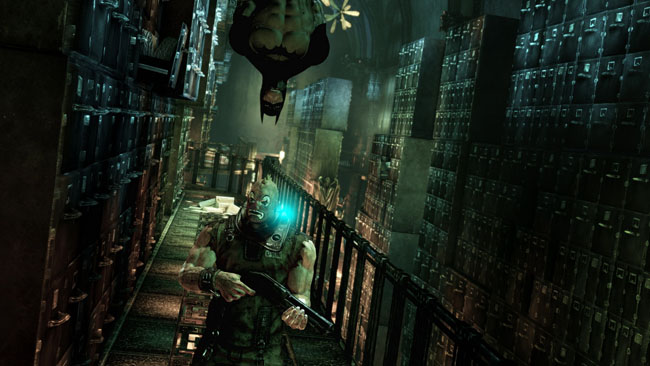 My biggest problem with the game was its sheer lack of imagination when it comes to bosses, the final boss in particular. Early on in the game you meet Bane – the man who broke the Bat. This guy is a big deal in Batman canon. The dude broke Batman’s fucking spine. Arkham Asylum, however, makes him a complete joke and then pisses on his unconscious body throughout the rest of the game.

Bane gets pumped full of a toxin called Titan. This turns him super huge and super angry. He starts charging at you, so you hit him with a batarang and dodge out of his way so he runs into a wall. Then you attack him. That’s all fine. A little simple, but fine. Eventually you defeat him. Hooray. After this though, almost every “boss” in the game operates in exactly the same way. Only it isn’t Bane, it’s just some thug on Titan that does exactly the same things, uses the same animations, and is defeated in the same ways. You have to fight this exact thing maybe 8 times throughout the game, and then two at once in the final boss fight. Oh, and the final boss fight is Joker on Titan. Yeah. It’s all completely retarded and is an enormous anticlimax. Fuck spoilers, I don’t give a shit. This ending sucked and I will tell you how much it sucked whether you want to be told or not. This ending and those copy/pasted bosses are why this game gets a B- instead of an A- from me. I WAS GOING TO GIVE YOU AN A- BATMAN. BUT LOOK WHAT YOU DID.

The reason I’m disappointed though is that about a quarter of the way into the game, the developers show you how incredibly talented and imaginative they are with an absolutely spectacular introduction of the Scarecrow, with a display of fantastic game design in a unique and entertaining boss sequence. I LOVED this part of the game more than anything else, and while playing through it I found myself really, sincerely hoping the rest of the game would be at least half as good as this. To be fair, everything except the boss sequences really did live up to it, so I was generally impressed and the game kept me thoroughly entertained, but the ending put a serious damper on that and left me wondering what the hell happened to their incredible creativity.

But I’ve rambled on enough about plot and design and story. I’ll get down to brass tacks and talk about more of the gameplay. It’s fun as fuck! Using Batman’s gadgets is really entertaining, and he has quite a lot of them. You’ve got batarangs, explosives, the grappling hook, a digital lockpick, his cape that goes swoosh and lets you glide around, and more. There’s a lot of uses for all of them, and most of them can also be upgraded several times as you gain experience.

Now back to stealth combat, probably one of my favourite aspects of the game. A lot of the time you’ll have a room filled with thugs who have guns. Guns are bad for Batman’s health, and as such you can’t take these people head on, or you will likely die. Instead, you have to sneak through air ducts to get behind people and knock them out silently, or distract them with explosives, or by throwing batarangs, or you can grapple to a high vantage point in order to drop down on them from above. There are dozens of ways to complete the game’s stealth sections, and they’re all very, very entertaining.