Having recently rejoined the ranks of the glorious PC gaming master race after a 3 year absence, I had a bit of catching up to do and spent a week downloading not only every game I ever bought on Steam but also a bunch of new shit, too. Among the new shit was Alien Swarm, a free remake of an Unreal Tournament 2K4 mod.

I know how that might sound. There are a few red flags in that last sentence. Free? Remake? Unreal Tournament mod? I know! I know it sounds sketch! I completely agree with you. But it turns out Alien Swarm is the incredibly rare exception to all of those rules.

Before we get too into this though I’ll say that its charm is entirely in its multiplayer, with little to no reason to play its singleplayer mode. In fact, the singleplayer mode is just designated as “Offline practice”.

If somehow you aren’t familiar with Alien Swarm, it’s a class-based top-down four-player co-op alien infestation survival shooter. That was a lot of hyphenated phrases in a row, but they all apply to this game. Think Left 4 Dead only with a different viewpoint, setting, and enemy, and if each character had unique stats, abilities, and choices of weapons and tools.

The gameplay is relatively simple. You have eight characters to choose from, all of which are one of four classes; Heavy weapons, Medic, Technician, or Officer. Those classes are all what you would expect them to be. The Heavy moves slow but has access to the most powerful weapons, the Medic heals people and carries out other support duties, the Tech does things like accessing computer terminals, opening locked doors (or sealing them closed to prevent enemies from following your group), and the Officer is a sort of all-rounder who has access to a variety of weapons and tools. Actually, the Officer can probably do other stuff, I never really looked into that class much. I’ll try it out more next time I play.

Anyway, I mentioned that there are 8 characters, two of each class. What this basically means is that you have two slightly different kinds of Heavy, two slightly different kinds of Medic, etc etc. For instance, one Heavy moves a lot faster than the other, but has less fire power. One Medic specializes in healing Infestation (a particularly nasty affliction present in the game) , and so on and so forth. It allows for quite a bit of variety right off the bat – but there’s even more customization and variety possible. 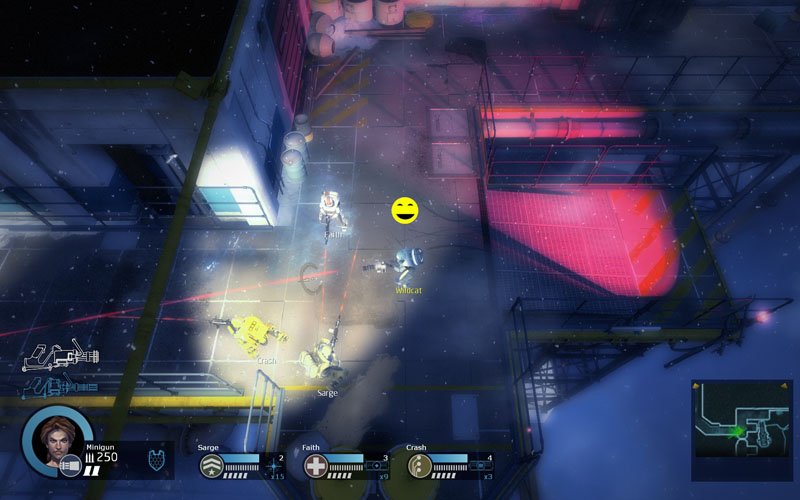 As you play the game, you gain experience and level up. I’m sure I don’t need to explain how that works since it’s an aspect of most multiplayer games these days. But anyway, you unlock a lot of weapons, tools and other stuff by doing it. Weapons that do a bunch of different things, like the tesla cannon which electrifies and slows down multiple enemies for crowd control, or body armor, or mines, or electrified armor which shakes off infestation parasites. There’s too much to list.

All of that adds up to some potentially limitless combinations of characters and strategies. So far my friends and I have been keeping it pretty basic. We’ve been playing as one of each class. I generally play rear guard as the Heavy with a minigun, body armor and a bunch of spare ammo, while the Tech and Officer lead the way to clear paths to doors and the Medic stays in the middle where he can see everyone. It’s proven to be quite effective so far and we’ve managed to play through all the levels on Hard mode with some varying tactics and loadouts.

I’ll stress that Alien Swarm isn’t a very long game. It has about six or seven campaigns, all of which are maybe half an hour long at most – a lot less if you know what you’re doing and play them efficiently. However, it has a significant amount of replayability, and it’s all about the multiplayer, again very much like Left 4 Dead. Nobody really plays this kind of game just to complete it, because the fun isn’t in simply beating it. You won’t get any satisfaction from doing that. And it’s also free. It doesn’t cost a penny, so you have nothing to lose by trying it out, but it’s best if you have at least a couple of friends to really do it justice.

In summary, the gameplay is really solid, really fun and really varied, but the catch is that it pretty much requires more than one player if you want to make the most of it. But it’s free, so it’s very difficult to actually criticise it, given how solid a product it is. I would have been happy to have paid money for it.