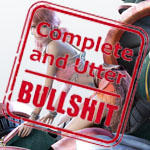 I initially wrote this as a review for the game, but I simply couldn’t force myself to ever finish it, so I thought it unfair to post a review without experiencing the entire game – even though I know for a fact it never improves after the point that I had reached.

Still, I didn’t want to waste what I’d written, so instead I’m posting it here in the blogé, where thoughts go to die, fester and finally rot.

I am sure that my opinion in regards to this game will be an unpopular one. I care not, for the things I wish to say about it need to be said. Now, hold on tight, because this is gonna be a long one.

Final Fantasy 13 is not a good game. It is an awful game. I cannot believe that somebody actually made this. I don’t know where exactly I should begin, so I’m just going to start listing its numerous and shocking flaws.

Almost the entire game is literally one long corridor. It is a simple, straight line populated by the same enemies again and again and again with no respites in the form of challenge or variety. The entire game can be completed by holding forward on the thumb stick and pressing A (or X on the PS3) repeatedly. There is literally nothing else to it.

No, really. That is the entire game. I don’t think it’s possible to die, but apparently if you do somehow manage that feat, you restart instantly where you died and try the fight again. I’m serious. Hell, you can even just press restart in the middle of a fight if you’re scared that you might lose! And every time you win a fight, you get full HP again! What the FUCK is this? What. The. FUCK. Is. This? This is not a game at all, let alone an RPG.

But the thing is, I wasn’t surprised in the slightest. I knew FF13 would be a piece of shit, because this is all Square is capable of now. Final Fantasy 9 was the last real Final Fantasy, and everything since has been a linear, easy, boring piece of shit that barely even qualifies as an RPG. Oh how the mighty have fallen.

There is absolutely no hint of a challenge, and no strategy – or even basic thought – is ever necessary. There is no longer any form of party system, you play as one character at a time and cannot control anybody else’s actions. This fosters tedium which leads to extreme boredom.

Tedium is also created by the game’s linear nature, once again leading to extreme boredom. As I already mentioned, the entire game is one never-ending corridor. No, seriously. I must stress this fact again. It is a never-ending corridor. You just move forward, pressing A to make the hordes of pallet-swapped enemies die.

They’ve also still neglected to bring back the intelligent, sensible level up systems that were present in most Final Fantasies 1 through 9. FF13 instead forces you to jump through its hoops every five minutes filling out little lines in some 3D charts. It’s similar to FFX’s system, only even more pointless and unnecessary. See, the game doesn’t let you actually level up unless it wants you to. You’ll max out all your abilities very quickly and have experience points to spare, but nothing to spend them on. After an hour or so, the game will once again allow you to proceed at its desired pace, rather than your own. Once again, you will max out your handful of new abilities and wait patiently for the game to allow you to gain access to some new ones some hours later.

The paradigm system may seem rather interesting at first, but you soon realize yet again how tedious and boring it is. Every single character has the same few roles. This essentially means that every character has the same moves. There’s no longer a job system, like the intelligent and sensible Final Fantasies had. You would have each character as a specialist role. But now, every character is one and the same. So, I ask you: What the hell is the point? The Stagger system is the only mildly interesting aspect to the game’s combat, but it falls very short of being entertaining, as it simply makes the game even less of a challenge.

Another flaw in the combat system regarding this lack of control over your party is that you have no ability to determine the character positioning. As an example, let’s say I have a melee fighter, a tank, and a healer mage. The tank’s job is to get the enemy’s attention while the melee fighter attacks it without being hurt, and the mage just stands back nice and safe and heals from a distance, right? Oh no, not in FF13. See, they wanted a nice, chaotic, pointless battle system so that they could be cinematic and make it look pretty for all of the graphics lovers out there to jizz over. As a result, all the characters are constantly running and jumping all over the screen to no avail, and the mages often run right into the action and stand next to the tank and get devastated by area attacks. BUT IT’S OKAY BECAUSE LOOK AT ALL THE PRETTY CHARACTERS JUMPING OVER MY SCREEN IN HD UGUUU~

Square, you know exactly how to deal with this issue. You’ve done it in several FF games in the past. Pretty much every FF game allows you to set characters to be front or back line positioned. This way, your mages hide at the back and take less damage while your melee fighters stand at the front and deal better damage. Why, oh why, would you not include such a system in FF13?

Now onto other issues. I’ve already touched on the game’s unwillingness to let go your hand and allow you to actually play, but there are more ways in which it restricts you. For instance, summons. Very early on, the game teaches you how to fight an Eidolon and claim it as your own so that you might summon it. You do so, and then, 20 hours later, you can finally use it for the first time. Why would it tease you by granting you this new ability and then removing from the game the only character who can use it? That is terrible design.

And as you may have heard from the rabble of Final Fantasy fanboys, there comes a point where FF13 at last rises out of of the shithole it made for itself. It hauls itself out of its own excrement and becomes as the swan from the ugly duckling. Suddenly, the crystogenesis system makes sense and becomes what it should have been from the beginning. You can finally set your characters up the way you wish you’d been able to from the start. You can choose your own party. At long last the world is expansive, interesting, new and wondrous.

But it’s just too late. It can’t save itself now. It takes roughly thirty five hours to reach Gran Pulse, the point where the game shows you what it should have been. I didn’t know whether to be relieved or saddened when I reached this point. I wanted to be relieved, because at long last Final Fantasy 13 was becoming the game I had hoped it would be, but it took me almost thirty five hours to get there. Thirty five hours. That’s not acceptable. It is unforgivable that Square would force its players to wade through over thirty hours of excruciating boredom and mediocrity to finally catch a glimpse of what they’ve wanted for so long.

Of course, many of the game’s inherent flaws are still present during the last, more bearable portion of the game, thus somewhat nullifying its sudden blaze of glory. Plus some new ones: Now that the game finally lets you have control over which characters are in your party, thus allowing you to tailor your own unique group of characters and paradigms to use, it so loves to take that away again at every chance it gets. After almost every cutscene, the game has re-assigned different characters to your party and removed all your custom paradigms, meaning you have to set things up the way you want again every time there’s a cutscene, and there are ALWAYS cutscenes.

I suppose I do have one compliment for it: I truly love the character and clothing design. Every character actually looks pretty cool, and so do their clothes. I can’t say such nice things about their personalities, though. For instance, Lightning spends the entire first half of the game being a complete emotionless bitch to everyone, and Snow never shuts up about being a hero, and Hope is the whiniest and most annoying character in the entire game. And some characters have really bad voice acting, too. Lightning sounds excellent, both her speech and combat sound effects, as does Snow, and as does Sazh. But Hope’s voice actor is blatantly talking through some pretty big braces and you can really hear it. Still, after a while Hope’s character becomes much more bearable, and apart from the excess saliva caused by his braces, he does sound pretty normal. Although hearing him cry every time he gets hit is infuriating. Vanille… ugh. Her speaking voice is tolerable, but her combat noises are not. Woman, you are casting spells, not forcing out an epic shit. All in all, Sazh and his baby chocobo companion are the best characters in the game, and by a very long shot the only truly likable personalities. This is not due to their voice actors, as overall the voices are good and they all play their parts well, I simply find personal annoyances in the combat grunts and cries of pain of certain characters.

Saddened as I am by Square’s apparent inability to create a good RPG, I was not disappointed by Final Fantasy 13, because I wasn’t expecting it to be good. I was expecting it to be awful, and it lived up to my expectations spectacularly. Disagree with me if you must, but know this: You are wrong, and I am right. This is not an opinion, it is fact. It doesn’t matter to me if every player and every reviewer is against me, for I know that it is I who is correct and that they are all either stupid, ignorant, or in the case of other reviewers, merely saying what they think people want to hear. I am glad that I am none of those things. For what little it’s worth, I have my integrity and my dignity. Though few will ever see this review, and fewer still will care, I take my stand here and say what so many would never dare: Final Fantasy 13 is a bad game. And y’know what? Final Fantasy 12 was even worse. And Final Fantasy 10 and 10-2 were bad games as well. I say what I feel has to be said about these games because what used to be an incredible franchise lays in ruins. Think back, and then answer this question honestly: Wasn’t Final Fantasy better in the days before the PS2? Back before graphics mattered, before anybody cared about hardware? Hell, it’s not just Final Fantasy. Hasn’t the overall quality of most games gone significantly downhill as technology has improved?