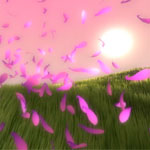 As I mention in my profile, I tend to enjoy a video game the same way most people would enjoy a movie. I see them as a form of entertainment, something you can relax and enjoy, rather than treating them as a chore and working at them.

Some games really take their appearances and narrative to a different level, though. Braid is a good example of this. The game’s music, visual style and vague-yet-compelling story all mesh together into an experience that’s hard to describe. When you play a game like this, you seem to feel more than you do with most games. Perhaps it’s partly due to the fact that the game doesn’t tell you what’s going on, so you have to figure out for yourself what to think and how to feel.

The reason I decided to write about this is that I recently downloaded Flower, a game on the Playstation Network which reminds me very much of Braid in several ways, primarily that it doesn’t explain its story to you and simply lets you decide your own ideas. It has very strong ecological undertones, and much of the game revolves around you activating wind turbines and destroying lots of electricity pylons. I’m not sure why electricity is bad, but hey, I can roll with it.

The music is sometimes uplifting, sometimes depressing, but it always has a very haunting sound. Combined with the high definition visuals and extremely vibrant style, the game is beautiful in every sense of the word.

Flower is a short game, with only six levels. There is some degree of replayability, and those so inclined will definitely wish to keep playing in order to discover all of the secret flowers and find the hidden routes around the levels. However, it’s not a game you’ll play for too long. Most will simply play it once and perhaps never again, but that’s what the game was designed for – it’s simply an experience, a proof of concept. Something to enjoy casually, perhaps show some friends how nice it looks.

The best way I can think of summing Flower up is that it’s like playing a screensaver. The colors, the gentle music and the very relaxing feel of the game are all very similar to things you’d expect to see appear on a monitor in the office after a computer has been left untouched over lunch.

I felt the game was a little too small to really be able to give it a full review – I mean, I don’t really see it as much of a game. As I said, it’s more of an interactive screensaver, but that’s not to say it’s without substance. It’s very much worth playing, just for the experience. Give it a try.