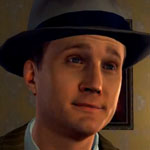 I tried. I really fucking tried. But fuck this. I am god damned bored now. It’s even boring writing about L.A. Noire, that’s why it took me so long to come out with this shit.

I can’t in good conscience submit this as a review, because I didn’t finish the game, so instead I’m simply writing about L.A. Noire as a blogé piece. As a result you shouldn’t take my ramblings too seriously because I don’t have a full and complete perspective of the game. I did finish most of it, though, so my opinion is at least a relatively well informed one and I can speak from personal experience.

L.A. Noire is, of course, made by Rockstar, so it’s essentially another GTA clone, with even more features removed. It’s a very linear and unforgivingly rigid experience. You are a police detective. Your sole purpose is to drive to a crime scene, gather evidence, and then question suspects and witnesses to discover facts about a case, thereby solving it and inevitably arresting the culprit.

People have compared the evidence-gathering aspect of the game to the classic point and click adventure genre, but I don’t think it’s a comparison that holds up. Point and click adventure games are, in general, quite difficult. There’s rarely anything to highlight what you should be clicking on, or what items will be of use to you, so you tend to click on a bunch of things and use item X on items Y and Z and so on until something happens and you can progress. Obviously it’s not always so challenging that you resort to simply using everything on everything else until you can proceed, but I’m sure people understand the analogy. Leaps of logic were always part of the genre. For instance, how would you ever know to use the rubber chicken with the pulley to make a makeshift zipline? It’s not something that you would immediately think of doing “just because”.

L.A. Noire’s point and click aspects, though, are painfully simple and frankly not even necessary as a result. You’ve given a crime scene, and you simply have to walk around it and press A to look at evidence. But it’s not like the evidence is hidden, or difficult to find or connect to the case. While you’re in a crime scene, music plays. This music will play as long as there is evidence that you’ve yet to examine. As soon as you’ve collected all available evidence, the music stops. This enormous telegraphing ruins what I thought the game was supposed to be; the experience of being a detective and trying to do the job well enough to solve a case. Even if you ignore the music, the game chimes at you whenever you stand near new evidence, and causes your controller to vibrate. In fact, the game generally doesn’t let you progress unless you’ve ticked all the necessary boxes and found all the important evidence.

If you’re going to make something this simple, just remove it entirely. It has no place in the game. It has no meaning, and no point. Either make it require thought and effort on the player’s part, or just don’t put it there. If you want to make a movie, make a movie, but this is supposed to be an engaging, interactive video game experience. It just doesn’t work if it’s this easy. There’s no satisfaction when you find a piece of evidence that would crack the case because the game told you it was there. You never get the impression that things would have gone particularly differently if you’d ignored or missed a piece of evidence, despite the fact that the game claims to have a “morality/decisions” type system.

The gameplay itself is extraordinarily basic. The gunplay is bland with no feedback or satisfaction, the melee combat is far too easy and simplistic (and as far as I can tell, the only way to lose a fistfight is to literally put your controller down), the driving isn’t too bad but it’s essentially the exact same as GTA4 but with slower, less responsive cars. Now, I love classic cars and I think that they’re stylistically beautiful and fun, and you could attempt to argue that the game is attempting to make the driving feel authentic, but that would be a really naive stance to take, because it just isn’t true. The driving feels bad because it’s the same driving that GTA4 had, which simply had bad driving gameplay.

Oh well, at least visually L.A. Noire is set in a beautiful and classy time. It’s a treat for the eyes. I love the setting. I think the entire early 1900s was a fascinating time. But while I’m on the subject of the game’s setting, I have to mention that the protagonist feels drastically out of place in late 1940s America. The guy is the ideal modern gentleman of 2011, and he just doesn’t fit in amongst the wife-beating, alcoholic, racist, commie-hating men of the time. Yeah, I know I’m generalizing and I’m sure there were plenty of people in the 40s who were more open minded, but the way he speaks and his attitude just don’t feel right. The guy’s a modern, liberal, understanding, calm, rational, extremely well educated and well traveled man of peace and love. They’ve really crammed every possible scrap of the ideal person into one character to make you like him and identify with him, but it’s too much. Writers need to realize that it’s okay for a protagonist to have flaws and make mistakes. In fact, it’s really important for the protagonist to have flaws. If anything, it makes it even easier for the player to identify with them and become emotionally invested in their story. I felt nothing for the cold, mechanical, logical and robotic actions and opinions of Cole Phelps.

It’s a trend I’m noticing in a lot of movies and games lately. It’s starting to feel as though writers don’t put emotion into their work. They simply have a checklist of admirable characteristics from which they create a Frankenstein’s monster out of popular, successful bits and pieces. It goes for the stories and plots themselves, too. I’m not saying anybody could create anything entirely original these days because, of course, it’s ALL been done before, but people could at least try to put effort and emotion into it.

Cole Phelps isn’t the only bad character, though. The other characters in the game are almost all a bunch of unlikable cunts. Your partners throughout the game are either crooked cops, wife beaters, or patronizing assholes. It made me wish I could kill them and just play solo. Everyone else is an asshole, too. The police chief is a huge prick, for instance. I expect the suspects to be lying dicks, because they’re criminals for the most part, and that’s fine, but even the witnesses are all a bunch of lying shitbags.

At first, L.A. Noire had me hooked. I was hoping it would become an amazingly well put together assortment of challenging cases which told the story of Cole Phelps while allowing the player to live the experience of a 1940s detective and actually get the satisfaction of solving cases, but instead I got a barely interactive and bland movie with a predictable script, full of actors who tried way too hard. The game also blew its load with the homicide cases half way through. I felt like they should have come nearer the end of the game. I also figured out who the real murderer was extremely early along in the chain of events because, once again, the game just telegraphs it way too much. It reminded me of Phoenix Wright, when you solve the case yourself really early on and piece together all the evidence. You know what happened, but Phoenix doesn’t, and takes forever to figure it out and you’re just going through the motions.

But anyway. I’ve rambled on enough. L.A. Noire was an interesting attempt at injecting something kinda cool into the gaming industry, but I think it got a lot of things wrong and missed the mark. It definitely has its merits though, but I’d like to see someone other than Rockstar take a crack at something similar to see if it can be done better.