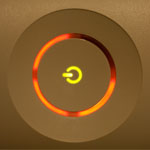 On Tuesday the 14th of October 2008 at 7pm, Boxy, my beloved and faithful Xbox 360, passed away, claimed by the console equivalent of the bubonic plague.

Yes, his eye flashed red, blinking pitifully, helplessly. But it was over. Not even a towel could save him now.

The signs were there! I should have known. Freezes and crashes and disc read errors became much more frequent in his final days, as though he was trying to tell me something.