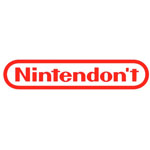 I’ve never been a fan of Nintendo’s abomination, mainly because I’m not 4 years old and I’m not a stereotype – at least, I’m not one of the stereotypes Nintendo targeted.

Still, I got it because when it launched I found the concept interesting and it promised good games. It turns out I had no reason to be interested in the concept because regular controllers are much more effective and Nintendo have yet to live up to their promise of good games.

Anyway. Recently I’ve been playing the Strong Bad’s Cool Game For Attractive People episodes on the Wii, since it isn’t available for Mac and I don’t have a PC. All was well. I downloaded and played the first two episodes. And then all of a sudden, my Wii decides it just doesn’t connect to the internet any more. It was fine before, ever since I owned the Wii it connected perfectly. Now all of a sudden it’s throwing up 51330 errors. I have changed no settings on my Wii or router, so the Wii has simply changed its mind about that internet thing.

Yeah yeah, I did all the usual stuff that the forum-dwelling idiots suggest. Not that any of their suggestions helped since I’d done them all already anyway. But none of that matters. This all just reminded me of one of the biggest, most retarded, ignorant, down right stupid mistakes Nintendo made: They didn’t bother adding an ethernet port to the Wii.

If I have to explain to anybody why that’s stupid, then you’re even dumber than Nintendo. Seriously, don’t even think about emailing me to tell me how great Nintendo are or that ethernet isn’t worth having on a console. I will tear you a new one and it will hurt like you wouldn’t believe.

Anyway, all this literally means is that, inexplicably, after a couple of years, my Wii has no internet connection, and by the looks of things, never will again. That last part is mainly because I simply don’t want to fix it, though. I’m sure if I bought an entire new router, reset my Wii to factory settings, went through the setup process fifty times, and then eventually resorted to using that awful Nintendo Wifi dongle, I’d be able to make it work, but the Wii just isn’t worth the effort.