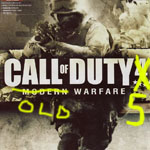 The controls, movement, look and feel of the game, right down to its user interface, are all straight from Call of Duty 4. This is not at all a bad thing. Call of Duty 4 is an absolutely superb FPS. I’m sure there will be more to differentiate the two by the time the full game is released though, and I’m actually looking forward to the single player campaign.

I’ll say right now that I’m sick and tired of World War II games. It’s a subject that’s been done to death countless times in movies and games and frankly I’m very bored with it. But a World War II game using an engine this good, that looks as good as it does? Yeah, that could be awesome. I’m hoping they don’t fuck it up.

One of the levels in the beta, Roundhouse, has an infuriating glitch that allows players to crawl beneath the terrain and shoot up through the floor, able to safely kill everybody without being seen, and even if you could see them they’re protected by the floor so you can’t attack them. Thankfully this will be removed from the final game, otherwise Treyarch are retarded. I guess finding flaws like this is what betas are for.

The weapons in Call of Duty 5 take some getting used to – anything with a fast rate of fire has a lot more kick than the guns in Call of Duty 4, so you need to be careful and fast with your aim. I’m sure that the array of unlockable weaponry and perks will be just as varied, unique and interesting as those in Call of Duty 4.

From what I’ve seen of the beta, I doubt Call of Duty 5 will surpass Call of Duty 4 in any significant or even all that noticeable ways, but this could just be my bias against World War II settings talking. I will stress that the game is definitely not worth full retail price if you have Call of Duty 4 already, as it is merely a mod; a simple reskin of Call of Duty 4.