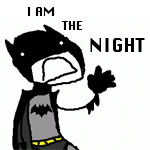 I finally got around to trying out the Batman: Arkham Asylum demo a couple days ago and I figured I’d write up my thoughts about it.

At first, I was a little apprehensive when I began playing. The camera was really close to Batman when walking which made the movement feel a little off. It also meant that Batman was so huge he obscured practically the entire left hand side of the screen. This isn’t really a big deal, but I did find it a little bit off-putting and frustrating. When running, the camera position is perfect. Same goes for during combat. It makes me wonder why they didn’t just use that same camera distance for walking, too. It would have been a lot more convenient, and felt a lot more natural. Part of me thinks that the devs just really wanted you to see how much detail there is on Batman’s cape.

While I’m on that subject, kudos to whoever worked on the visuals. The game looks great, the textures are realistic, yet maintain a very comic book art style. The setting very much suits the plot and characters. It’s noticeably the Gotham that everybody knows and loves.

I did question the sheer number of gargoyle statues that seem to be prevalent throughout the asylum’s interior. I always thought gargoyles were supposed to be outside of a building. Still, these gargoyles serve a purpose. Batman can grapple onto them in order to move stealthily around a room, maneuvering behind targets and so on. But they don’t seem to serve any architectural purpose, so I found it a little hard to believe that every room and corridor had convenient gargoyle statues, and that Batman’s grapple hook can only attach onto them and nothing else. However, Climpa put my mind at ease on this matter by stating that gargoyles are an integral part of Gotham architecture, and elaborated that “They even have them in their McDonalds and shit”, so I can forgive this point.

Judging from the demo, the game is extremely accurate in terms of its character personalities, histories, motives and so on. It has a biography feature which details the past of every main character and villain, which is surprisingly informative and helps to familiarize you with the people that you’re interacting with, and serves as a good introduction to the Batman universe for anybody who is unfamiliar with it. And for those who’ve been reading Batman comics, playing the games and watching the movies since they were kids, the game still offers a lot of surprises. The characters, though familiar, seem new, which compels you to proceed and uncover their secrets. On top of that, the writing seems spot-on and the voice acting is superb.

I really should touch on the most important aspect of the game; its gameplay. I have to say that I was expecting it to be average at best, but it really surprised me. It’s a lot better than I assumed it would be. The default combat isn’t anything particularly special, but it’s still relatively fun and satisfying. It also takes a certain degree of timing and skill, especially when fighting multiple enemies. However, you probably won’t spend much time at all with the default combat. The game offers a wide variety of methods to defeat enemies, most of them involving stealth attacks, such as dropping down on them from above, or sneaking silently up behind them and knocking them unconscious, and so on. The stealth gameplay is very satisfying to pull off, and it takes a little practice and a lot of good timing in order to flawlessly dispatch multiple enemies without any of them becoming aware of your presence.

Unfortunately the demo is only about 15 minutes long, so I don’t really have much more to say about it, other than I was impressed and I’m looking forward to the release of the full game.