Hey, better late than never, yeah? This game got hyped up a lot by Sony fanboys when it was announced just because of the art style. Well, I’m here to tell you, you’re all wrong. The art style is average, ok? Not good, not bad, average. But that’s ok, because, to my surprise, Valkyria Chronicles’s gameplay turned out to be really fucking fun.

Yep, after the game came out I kept hearing good things about it, but I had my doubts. You know how these Sonyfags will extoll any halfway decent exclusive just to validate their rampant fanboyism. Not that fanboys from the other two factions are any better, but when you have to defend something that’s getting its ass kicked as badly as the PS3, you tend to overrate the exclusives that don’t suck.

But forget all that, because this time it actually wasn’t a lie. Five missions in, I couldn’t believe how fun VC was.

The easiest way to understand what this game is, is to think Fire Emblem. You know the whole thing. Turn based strategy, units are characters that are gone for good if they die, etc. The main difference is that it’s not grid-based, and enemies are free to shoot you while you’re moving a unit as long as you’re not aiming. The back of the box wants to make you believe that fights take place in real time. Probably a feeble attempt to rope in today’s action-hungry gamer. Like most things on the back of boxes, this is a lie. Fights are not real time, and there is no action whatsoever. Once you aim, everything stops and you have all the time in the world to shoot, and once you do, it’s the traditional “attacker shoots a little, then if the defender still has HP left over, he counter attacks and shoots the attacker, then the turn is over.” Just like Fire Emblem. 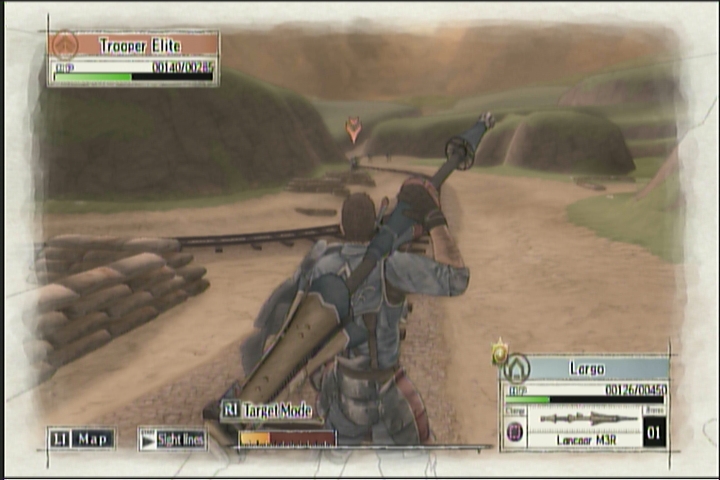 Man, fucking game boxes always trying to sell themselves based on lies. If I had made the Valkyria Chronicles box, the only thing I would’ve put on the back of the box is a single bullet point that said “This is a pretty good game.” That’s all it needs. Everything else is bullshit. I admire games that have nothing on the back. It takes balls to go against the norm and do that.

Something I like about this game is how all of the classes are useful. Well, except for Shock Troopers. Nobody likes those whores. But originally I thought scouts would just end up being weaker versions of shock troopers, and engineers would be wastes of space. Luckily, that couldn’t be farther from the truth. Scouts are actually the best unit in the game, and engineers are ridiculously useful since they’re basically slightly weaker scouts with more grenades, ability to restock people, and repair tanks. Contrary to what I thought at first, shock troopers end up being useful only in one or two missions.

Since Shepton started playing before I did, and had been bitching to me about how fucking hard the game was and how a mission he was doing was “impossibly hard” and “retarded”, I went in thinking it would be. But turns out he just sucks. VC isn’t a particularly hard game. It’s challenging enough to be satisfying, but it’s not really what I’d call hard. Hell, I mostly got nothing but A ranks, and only a few B ranks.

And while we’re on that subject, the ranking system is a feature I particularly like. After a mission you get a rank, either A, B, C, D, or F (or so I presume. I’ve never actually gotten anything below a B), depending on how fast you completed it. This actually helps the game a great deal, because although it’s not that hard to get A ranks, it does boost VC slightly past the “too easy” threshold. More importantly, it improves the game because it encourages you to be aggressive while still being careful not to lose a character. You can turtle if you want, but expect to get a D at the end. You have to be fast but still do things correctly. You have to find the best way to get the most done in a single turn.

Another thing I like is the freedom you’re given when it comes to moving your units. Unlike Fire Emblem, where you can only move each character once per turn, in VC you have a set number of CP (command points? Control Points? Eh, who gives a shit), and acting with a unit takes up 1 CP (tanks use up 2), but you can keep moving the same unit as long as you have CP left over. The catch is that each successive time you use a unit on the same turn, the distance it can move will be less and less. At first I wasn’t too sure of this system, but it’s actually great. If you were only able to move each character once, your options would be greatly reduced. If you restarted a mission you wouldn’t be able to alter your actions as much because you would only be able to do so much per turn. But this system opens up a bunch of possibilities for different strategies. Nothing in the game is as satisfying as pulling off a crazy strategy just right and managing to beat the mission in a single turn. Hell, sometimes even I could hardly believe the shit I had just pulled after completing a mission. 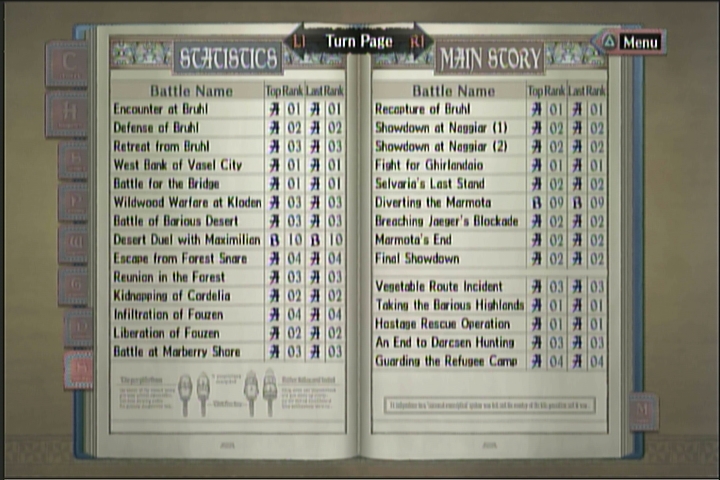 Well, I’ve been praising the game a lot up till now, and it does deserve it, but it’s not all candy and rainbows. Like I said before, people overhype the art even though it’s nothing special. What I liked the least, though, is the story and characters.

As is expected from this kind of game, there are just way too many fucking characters, and because of that, 95% of them aren’t developed past giving them a few traits, a profile, and a few combat lines. But even the main characters who do get screen time are all largely uninteresting.

I could dismiss the story as a standard, boring affair (and it is), but it’s actually slightly worse than that. On top of being boring, it has a bunch of annoying shit. For example, everything was going fine, up until the game decided to throw in a bunch of annoying supernatural shit. Specifically, Selvaria, the typical “Ooh, look at me, I’m a bad cliche from a mysterious race, I use hax, parry tank shells, and take out entire armies by myself. Be impressed now plz 8o” And then everyone proceeds to shit their pants at how “awesome” she apparently is. Even though she’s just a dumb bitch that makes my face come into contact with my palm. It’s not like I have anything against unfairly powerful characters, but they need to be done well so I’m not going “ugh” every few seconds. It’s especially irritating that the developers so obviously think she’s cool when she’s probably the worst character in the game. Thankfully at one point she goes emo and decides to blow herself up along with a tower and a bunch of people. Yeah, real nice, Sega. Or should I say AL QAEDA? Fucking Japs brain washing our youth. They just want to take our freedoms for their own evil ends. Which most likely involve tentacle rape in some form or another.

Then later on in the game it’s revealed that the main girl is actually of the same mysterious race (yeah, I only give a shit about spoilers when it’s a good story). And despite the fact that it had been made painfully obvious several chapters before that she was, the main character is still all like “ONOZ!!! SHE CAN’T BE VALKYRIA!!!!11” Ugh. Please. The fact that she somehow opened a door that can only be opened by a Valkyria didn’t tip you off? Or that she’s reminding everyone at every. fucking. opportunity that she’s an orphan. “Hey, I’m an orphan, guys, ok? I have no clue who I am or where I come from, ok? Don’t forget now!” Jesus fucking Christ. I hope no one was being payed to write this shit.

Then when her “omg latent powers no one suspected she had” are activated she proceeds to have a bad animu duel with Selvaria that will decide the fate of the entire nation because who cares about armies when you have a chick on god mode, right? And I actually like anime. But this shit is just embarrassing to watch. Sometimes I just wanted to get all the cutscenes over with and just get to the next battle.

The game would’ve gotten points with me if the discriminated race, instead of being dark haired were dark skinned, instead of being called Darksens were called Niggers, and instead of working in labor camps worked in cotton fields. See, if you’re going to do racism you need to do it right. None of this pussyass politically correct dark hair shit.

So yeah. Valkyria Chronicles has a pretty retarded story and boring characters, but it doesn’t matter because it has great gameplay, and gameplay will always be more important than story. So I forgive you for subjecting me to your cutscenes, VC, and declare that you’re still a great game. This right here is the PS3’s killer app (I know that’s not saying much), not MGS4.