This summer… In a world where music has been outlawed…

The original Song Summoner: The Unsung Heroes was a tactical role playing game by Square-Enix , reminiscent of their Final Fantasy Tactics series, on the iPod Classic and Nanos. While an odd platform choice for a game of that genre, especially given the comparatively small gaming market involved with it, the justification for it being on iPod came in the form of the squad recruitment mechanics. Players generated companions to fight for them by having the game read songs from the iPod; and then apply some kind of magical formula to it to determine which character class the song was. As well as this, listening to your music, as you normally would, levelled up the character associated with that particular track while you weren’t playing; and while far from the first game to generate things from other things, with the Monster Rancher being of particular note and dating back to PS1, Song Summoner maintains the charm associated with compulsively trying everything you have in an attempt to get the best around. 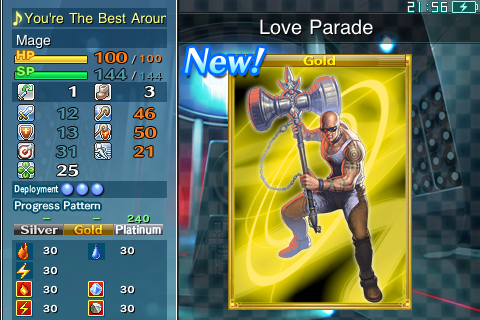 The biggest flaw with the original Song Summoner however was not one that could be easily fixed. The inherent problem of the format it was on was that the click-wheel did not make for precise or easy movement. Navigating menus was cumbersome and moving units around the battlefield often resulted in having to settle for positioning them as close to where you wanted them to be as you could. If only there was some new format they could put the game onto. One that could still contain a vast library of songs to pull data from – and at the same time had some kind of screen you could touch to more accurately select and position units. A “touch screen” if you will.

And thus, a year and a half after the game was originally released, Song Summoner has been ported to iPhone and iPod Touch with a fancy new, and appropriate, sub title: Encore.

The game is a fairly standard affair for tactical RPGs. The main character assembles a group of mismatched comrades and travels between towns and battlefields as the story progresses, with the option to return to completed areas to partake in random encounters, levelling up and generally laying waste to a small army of enemies on the way. Battlefields are presented in an isometric fixed view and movements/ attacks take place over a grid system on top of it all, with your performance ranked at the end of each encounter. 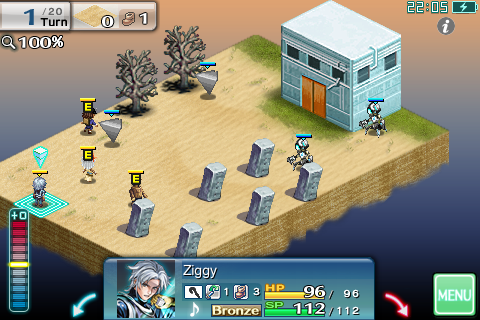 The move to iPhone/iPod Touch allows for the game’s camera to have been pulled back, allowing for a clearer presentation than the previous version. Characters and maps look crisp during regular play, with everything easily identifiable, and the touch controls are simple and user friendly. Touch units to select them, touch applicable grids to move to or attack them, touch menus to open them, etc. The now touch standard act of pinching of sliding apart fingers on the screen allows you to zoom in and out of the battle, though unfortunately no sprite smoothing is applied, often resulting in somewhat distorted characters if your zooming doesn’t happen to land exactly at 2x magnification.

While the story of the game is lacklustre at best – robots outlaw music and harness the inner musical power of humans for their nefarious plans (also your brother is kidnapped by them) – it really doesn’t feel like it matters, as ultimately it’s just a shallow excuse to make an RPG where generating characters from music plays part of the mechanics of the game.