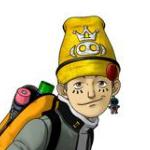 Shit, dog. Before this game came out I thought it wouldn’t be very good. After all, for one thing it was on PSP, and two, the characters all looked gay. And guess what, I was fucking right. But here’s the unexpected part: it turned out to be bad because of a LOT more reasons than just those. Sucks because I wanted to like this game, but that’s how it goes. I ain’t gonna go easy on nobody, not even you, SMT. Aight, let’s get this shit started.

Oh, what’s that? You think just because it’s on a handheld and it’s a remake of an old game you’re getting off scot free? Go fuck yourself. I ain’t care what excuses you wanna come up with, this game sucks shit, plain and simple. Like I said before, all of the characters look stupid. This game was made back when Kazuma Kaneko wasn’t any good and it shows because the art is quite a bit inferior to all other SMTs. Come the fuck on! How can I get into it when all the characters are so uninspired? And unfortunately that goes for more than just the art, because they are also pretty damn uninteresting personality-wise. Jesus, we’re off to a bad start, aren’t we?

But turns out there’s actually something in this game that is actually good: Shoji Meguro is on the ball because the music in Persona is ultimate, nay, legendary. My only quibble is that the songs tend to be really short and don’t go on for very long before looping. Even the Velvet Room song is cut off halfway. But still, it’s all really good, enough to spice up this shitty game a little, even! I kind of feel bad for the guy. In the soundtrack he says he wants people to play through the game multiple times so they can hear his music. Sorry dogg, but unfortunately your excellent work has been married to an undeserving game.

But anyway. Let’s talk about more serious stuff. The gameplay. In other words, the real reason why this game sucks. But where to fucking start. First of all, the battle system is horrendous. You know how P3 and P4 are a step down from Nocturne and DDS in terms of the battle system? Well, P1 downright fell down the fucking stairs and broke its hip. Yes, I know the game is old, shut the fuck up. But if I’m remaking a game and see the battle system is this bad, you can bet your ass I will fix it instead of trying to stay faithful to the original like a dumbass.

It’s slow, clunky, boring, and requires little thought or strategy. Well, in that respect I guess it’s similar to most other RPGs out there. But this is SMT we’re talking about! I’m not even talking about the lack of the press turn system. P1 is lacking the most basic stuff like getting extra turns whenever you hit a weakness or being severely punished for using ineffective attacks! It’s amazing how bland the game is without this. Battles are no fun at all and actually feel like a fucking CHORE. And trust me, that’s a significant statement coming from me because I have an incredibly high tolerance for this kind of thing. I’m not like your average RPG hating asshole who complains about getting a random encounter every ten steps. The problem in P1 isn’t the high frequency of random encounters, it’s that the battles are boring.

But this isn’t the only reason why it’s boring. Which brings me to the next problem which is of HUGE importance: P1 is too. Fucking. Easy. I played on Expert Mode and I was NEVER challenged in the least. I never even saw the game over screen once! That’s right, I never died once during the whole game! What the fuck? If this is Expert what kind of shit must be going down on Normal? And I don’t dare to even IMAGINE Beginner. It’s inexcusable. Enemies do pitiful damage to you. That is, if they even DO any fucking damage to you because apparently all enemies in this game are fucking blind and miss like 50% of the time. Hell, this game is so easy that you even recover MP while walking. A tough and fun thing in P3 and 4 was how difficult it could be to manage your MP consumption, but P1 doesn’t even have this! Shit, ALL SPELLS COST THE SAME AMOUNT OF MP. What kind of dumbass shit is that? God dammit this pisses me off. How the hell am I supposed to care when I can sleep through every battle and still win?! Oh, that enemy just hit you with your weakness? No problem, chances are it’ll miss! And if it doesn’t, it’ll do pitiful damage and won’t even give him any other kind of advantage! Oh, you go back attacked? Relax! Not only will this hardly affect anything, but the monsters will probably just miss you anyway! They might even not do anything and wait for your turn! Hell, maybe they’ll just keel over and save you the trouble of doing anything!

Jesus christ. It’s disgusting. I miss the good old days in Nocturne where the first enemy could kill you just because you got unlucky. Or where you could get back attacked and killed in one hit before you could even do anything. Where you had to make damn sure you did everything correctly every battle or risk being killed in one turn because enemies were so damn powerful. That was FUN. It felt like every battle mattered. Like no exp you were getting was a waste of time. Like you had to care or be destroyed. Unlike THIS stupid game.

Speaking of exp, Persona has this really weirdass system where instead of exp being distributed in a uniform fashion, it’s given out based on how much each character did. This is terrible. It heavily rewards the characters with the most agility since they will go first and likely kill the enemies before the slower characters get a chance to act. Plus, the system creates a vicious circle where the character doing the most gets most of the exp, thus outleveling everyone and getting even stronger, thus doing more damage and getting even MORE of the exp, thus getting even more ahead of everyone, and so forth. This can create situations where one of your characters is level 50 and another one is level 30. The only way to counter it is to deliberately stop your best character from attacking and make him just sit there while the weaker characters try to level up a little. Which, frankly, is retarded when you could solve this nonsense by not making up ridiculous exp distribution systems.

The game is kind of short because it has two different paths you can take at the start with different story, scenes, dungeons, bosses and characters. You can either do the normal quest or the Snow Queen quest. Which is kind of cool. I guess. In a way.

Except for some reason, if the game wasn’t bad enough already, the Snow Queen quest commits one of the biggest sins of gaming: being an asshole and not letting you save. You can go ten mother fucking hours without being able to get to a save point! What IS that shit? Jesus fuck. Do I seriously have to go over basics like these again? If your game is too easy, taking away save points fixes NOTHING. I mean let’s be serious now. There’s only three explanations for something like this: the designers are either assholes, retards, or retarded assholes. Either way your shit game gets a big fucking D. Can you imagine what it’d be like if you died at the boss and lost 10 fucking hours of progress?

Anyway, moving on. The dungeons in P1 are actually better than the ones in P3 and 4 in that they’re not randomly generated. However, even then they turn out to be pretty boring because not a whole hell of a lot is going on in them. You will almost NEVER find anything when exploring. All you’ll ever find is a fuckton of dead ends because for some reason the dungeons are incapable of having items in them. The only time you’ll ever find items is when you enter clearly marked rooms. Bull fucking shit. As if this game needed to be any more boring than it already is.

The reason P3 and P4 can get away with having stupid randomly generated dungeons and inferior general gameplay to Nocturne and DDS is because they have social links, amazing characters and dialogue, events, great art, personality, etc. P1 has none of these things. Which, in the end, makes it a game with almost no redeeming features. It would’ve been better off left to rot in 1996. Not even a remake was able to save something as fundamentally flawed as this.