Final verdict: B-
Final playtime: Yet another game that doesn’t tell you your playtime.

So ToT was already worth it just ’cause I got this awesome cow plushie bonus (what? Fuck you. So I’m a slave to cute things. You wanna make something of it?). But how’s the game itself? Not bad, actually! Like usual, they didn’t change too much of the Harvest Moon formula. You know the drill. Crash land on a field with a little shack. Plant and farm crops, raise livestock, make friends, woo one of several ladies (or men), marry, have a…kid…JIBBLIE JIBBLY JIBBLE!! Wokay, let’s forget about that last part. Although apparently it’s impossible to avoid having a baby! I know I’m supposed to be an ignorant farmer but jesus fuck, can’t I buy a condom at the general store or some shit? Come on, even the pope advocates contraceptives these days, and he’s like the most outdated geezer alive. But seriously, none of this baby shit. I’m allergic to babies. And if I were a girl, it’d be even worse! I’d have to walk around with something inside me and then when the time comes I’d have to…OH GOD FUCK NO SAVE ME SUBJECT CHANGE QUICK!

What was I talking about before I got into this mess? Oh right, the pope. Fuck man, I would be an awesome pope. Benedict shmenedict. I’d be better than that old gramps. How old is he anyway? Fuck. Is there some kind of law that says you have to be at least 90 years and have one foot in the grave to be pope? Screw that. 20 year-old pope coming in, bitch. Get outta the way. I’d do cool shit like allow gay marriage. And when people come to me, instead of doing the cross thingy with my hand I’d give ’em the horns, baby. Damn, this is sounding pretty good. And I’d have hot catholic chicks worshipping me and giving me blowjobs. Awww yeah…

Hey wait a minute. This isn’t what I was supposed to be talking about! Dammit, it’s not my fault Harvest Moon makes me think of hot catholic blowjobs. Err, right, moving on. But yeah, again you can choose to be either a boy or a girl. And there are eight girls you can marry, and eight guys. No, there are no gay marriages yet. Come back in a few years when society isn’t made up of a bunch of close-minded hate mongering faggots. Oh snap, I think I need to read that sentence again… nah nevermind, I’m sure I didn’t say anything contradictory. Anyways, frankly the girl is cooler than the boy, but I chose to be a boy anyway ’cause fuck wooing guys. Eugh. 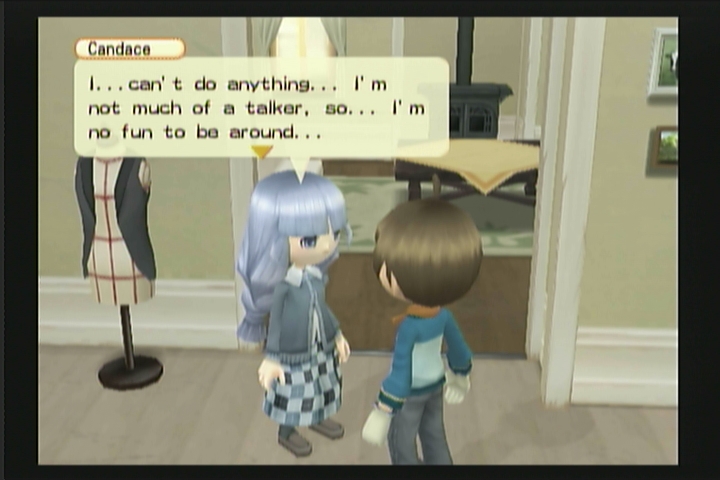 You’re given a shack, a small plot of land, a bag of seeds, a few tools, and you’re off on your adventure to get out of this rut you’re in and become a profitable farmer. Loser. The game is pretty fun, and it soon becomes surprisingly addicting, especially near the start when you have tons of things to do, skill levels to increase, tools to upgrade, houses to remodel, furniture to buy, mines to explore, power berries to find, people to meet, animals to buy, what have you. But the thing is, like all HM games, there comes a point where you’ve “made it” as a farmer, you’re set, profitable, married, and pretty much done everything there is to do. At which point it goes downhill big time. So basically, the game is a lot of fun when you’re starting out and trying to claw your way out of poverty, and then once you’re filthy stinking rich it’s boring. Because let’s face it, being rich in real life is awesome, but in a game it’s no fun.

And fuck man, once you have a lot of animals it becomes kinda repetitive. Every single morning you wake up, go in the coop, pick up the eggs, put them in the mayonnaise maker, ship it, pet every chicken, feed every chicken, pet every silkworm, feed every silkworm, pet every cow, brush them, feed them, milk them. Do the same for the goats, sheep, horse, ostrich. Fuck man. By the time I’m done it’s 3 in the fucking afternoon. And I have to do it every single day? Fuck me. It’s times like these you wish they hadn’t abolished slavery so you had somebody to do this shit for you. Damn you, Lincoln! Fuck you!

And fuck man, the chickens are the worst. At least the other animals cooperate and stay in one place. But the chickens are always running all over the place making everything harder for me. God damn sons of bitches. After a while I just stopped petting them altogether because they’re just not worth the trouble. And then they got in a bad mood! What the fuck? I don’t have time for your god damn mood swings! Your eggs don’t even sell for that much, you should be thankful I even take the time to FEED you. Besides, how does a chicken get in a bad mood anyway? All they do is peck the floor and poop. They should be happy all the time. Plus, they want to be fed by HAND in the mouth. It’s like fuck man, who do you think you are? Some kind of Egyptian pharaoh? You’re a fucking chicken. I should butcher you all and make KFC out of your corpses. 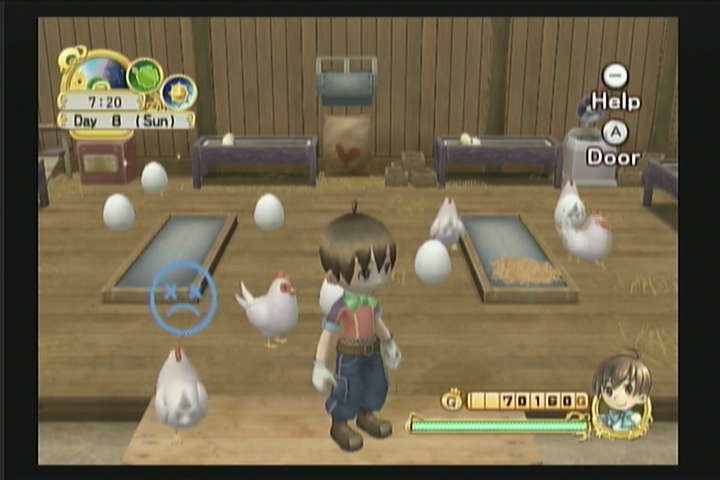 I gotta say, I’m impressed and glad that the devs made the retarded wiimotion controls optional. You can even use the classic controller instead of the nunchuck, which is great. Looks like they know the score. Though if it was me, I wouldn’t have made retarded wii controls in the first place.

‘course, they didn’t make everything right. For example, the game has slow down in a few places for no reason at all. It’s not too often, and it’s not much of a problem, just annoying. Especially because the graphics are nothing special and there’s practically nothing happening that could strain the console in any way. Let me also say that the furniture placement system in this game is beyond awful. It’s full of seemingly arbitrary restrictions. Oh no, you can’t move that table! You’re not allowed to put your bed on the second floor! Or even move it in any way! You can’t place anything on the left side of the house! That’s sacred cow territory! You want to have a chair AND a sofa at the same time? What are you, some kind of greedy jew? You’re only allowed to have one chair! You get the idea. It’s ridiculous and it makes no sense. I’m not asking for much. I’m not a woman or a feng shui interior decorator, but come on, what you tryin’ to pull? 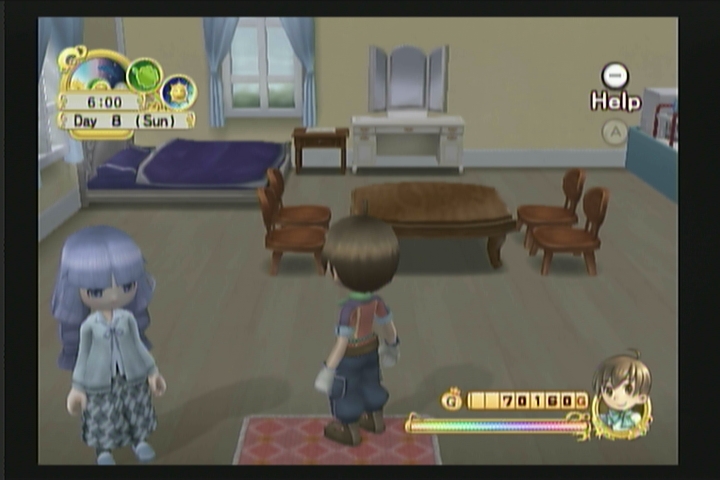 Anyway, overall it’s a pretty cool game. If you haven’t played an HM in a while, I’d say go for it. It’s a nice iteration and very enjoyable for some time until you become successful. Which I suppose is kind of like beating the game. The Wii doesn’t have any good games on the horizon anyway, at least that I can think of right now, so this one is a good choice.

Final Playtime: UGH, yet another game that doesn’t tell you your playtime. God dammit, how hard can it be to add a little clock in there?