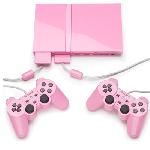 So, Sheppy, how’s that LBP beta shaping up? It damn well better be good, fool. The PS3 needs a good game to make it stop stinking up the place. I haven’t touched that shit since… wait, when was the last time I turned on the PS3? I don’t even fucking remember. It’s that bad. God damn doorstop.

But hey, I guess the 360 isn’t exactly getting much use either. Haven’t touched it in over a month. But at least that has games coming out for it. Hopefully Banjo Kazooie won’t be a complete let down. Surprisingly the Wii has been getting the most use lately. Granted a large part of that use was replaying Second Opinion but at least it has something worth replaying. Does the 360 have even one awesome game worth replaying? No.

In conclusion the PS2 rocks. Also more consoles need to come in pink.