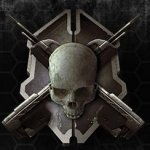 With a new Halo game having been released that of course means that there is a new Legendary mode to conquer.

While most people will undoubtedly use this difficulty level exclusively for co-operative play, there will always be those friendless or masochistic few who intend to beat it solo – like adding a fourth notch to their Halo Bedpost after a rough night on the town. And so for those brave few good men and women of the UNSC, I present the New Mombassa Survival Guide.

If at first you don’t succeed…

One of the most important survival tips I can give is to just stay moving. For the most part, Covenant weaponry uses slower moving ammunition than good old fashioned hot lead, and it’s harder for a Jackal sniper to hit you between the eyes if you don’t stand in one place.

Those who fight and run away…

Running low on ammo? Don’t hold out for more of the same kind, throw it down at the first opportunity you get to replace it with something else viable. While you may not particularly enjoy carrying around a Needler or a Plasma Rifle, it beats running into a party of Brutes with one clip in your SMG.

Hunt down the audio logs so that you can unlock the UNSC Weapons Caches around the city. These are the only way to reliably get more ammo for your Auto-Mag and SMG, as well as stocking up on Frag grenades. Some of the caches even have more heavy weapons in them, such as sniper rifles or rocket launchers. Occasionally you may even find a Mongoose to make life that much easier for getting from point A to point B.

And carry a big gun. You’ll thank me when you run into a Brute Chieftain or a pack of Hunters.

While it may not feel like the most devastating set of weapons, in the absence of heavy firepower, the best combination is a Plasma Pistol and the AutoMag. Single bullet to the head kills Grunts. Hitting a Jackal once through the gap on the side of their shield causes them to flinch, exposing themselves and allowing you to once again plant a single bullet in their skull. A charged Plasma shot will drop the shields and destroy the armour of a Brute, allowing for another single shot kill. While you may feel more comfortable with an automatic weapon, spraying your load all over the wall beside your target, precision pays.

While it may be tempting to throw a grenade into a crowd of Grunts, don’t. Conserve these for when you really need them, particularly sticky, fire and spike grenades. If you’re in a tight spot, tagging a brute that’s gotten close enough with one of those can level the playing field pretty quickly, but you’re going to need all you can get your hands on to take down a pair of Hunters if you run into them with no means of escape and no heavy weaponry. While it’s undeniably fun to needlessly tag an enemy with one of these, try and keep them for “emergencies”.

And ultimately that’s about all you need to know when it comes to surviving the mean streets of New Mombassa. Good luck out there, and try to make some friends before Halo: Reach comes out.