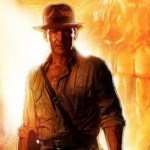 Finally, a new Indiana Jones game. That’s totally awesome, right? I mean the graphics in Nintendo Power looked a little sub par even by Wii standards – and the trailer is 100% prerendered but… it’s Indy… Right?

So late monday night LucasArts released an exciting Fact Sheet for their new Indy game; Indiana Jones and the Staff of Kings. These kinds of things are pretty standard affair for game releases in this day and age, and generally attempt to inform retailers so that they may better pimp the games to the general public. The list has all the obligatory check points on, even:

“Wield your Wii Remote like Indy’s signature whip for a variety of uses – from combat to navigation to puzzle-solving.”

“Use your highly interactive Hot Set environments and your wits to defeat your enemies.”

“Explore exotic locations around the globe in an all-new story that puts you on an epic quest for the Staff of Moses.”

More than one level? Check.

“Experience thrilling chases and control vehicles – fly a biplane in a canyon trench, take the reigns of a wild elephant through the streets of Istanbul and navigate a raft down a raging river.”

“For those old-school gamers there is nothing better than unlocking the classic Indiana Jones and the Fate of Atlantis game!”

One of the greatest Adventure games of the 90’s? Che–wait, what?

And just as suddenly as they left, it seems Lucasarts Adventure Games have crashed in through the window to make themselves a part of our lives once more. Indiana Jones and the Fate of Atlantis alone makes the Wii version of this game worth purchasing; ignoring that it has already been available through other less legitimate methods on both Wii and DS… along with virtually all of the other catalogue of LucasArts Classics (assuming of course that you own them legitimately in the first place).

Indiana Jones and the Fate of Atlantis is quite simply one of the most astounding point and click adventures to ever grace the pointer of a mouse. Released all the way back in 1992, and subsquently rereleased with a voice track some years later, Fate of Atlantis is – to this day – still the best Indiana Jones game to have ever been release. Don’t believe me? See for yourself.

Infact, scratch that. Indiana Jones and the Fate of Atlantis is THREE of the best Indiana Jones or Adventure games ever. Why three? Well I’m glad you asked. Within the prologue chapter of the game Indiana Jones is presented with a simple enough choice: Fists, Brains or Teamwork. His answer to this question drastically changes the entire game. And I don’t just mean modern standards of “Oh we have 2 endings” changes the game, I mean you can have a more combat oriented game, the solutions to puzzles can change, some puzzles only exist during certain paths, certain locales are visited in a different order (if at all), huge sections of dialogue change and of course the ending changes.

Indiana Jones and the Staff of Kings is essentially three awesome games packed into one (probably) cruddy Wii game. I implore you all, if for nothing more than the sake of Adventure games everywhere, pick up this game in an attempt to show your enthusiasm for a recently rebirthed genre. Only you can help bring back the golden age of LucasArts.