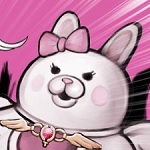 Yo stop the motherfucking presses! Whadda we got HERE? A good game in this age of shit? Damn straight, and it's not just good, this game is awesome. I swear to fuck Spike Chunsoft is quickly becoming one of my favorite developers of all time. First the amazing Zero Escape series and now THIS? Who are these sorcerers? Actually, Danganronpa came out between Zero Escape 1 and 2, so I guess it wasn't a series yet when this game came out but WHATEVER. Due to the great and inherent injustice in this world, Danganronpa has only now been released in America. But better late than never. It's all good.

It's appropriate that I'd mention Zero Escape, because this game is extremely similar to that. Suspiciously, even. It's a visual novel type murder mystery where a group of characters are trapped in a facility (in this game, a school) by a mysterious mastermind who might just be one of them and forced to participate in a fucked up game if they want to get out. Zero Escape 2 even stole the idea of having the antagonist be a cute animal. Point is, there's a lot of similarities. And they know this, as evidenced by the abundance of references all over the place. Aside from that it even has some shades of Ace Attorney, with the presence of court trial phases and investigations, and some dating sim aspects with the ability to hang out with and give presents to other characters to build relationships. Stealing from all the right games? Clearly these guys know what they're doing. I'm impressed.

Firstly I'll start out by saying that this game has really good art and a surprising amount of it. It's surprising because art is very expensive and you would think that what seems like a relatively low budget game wouldn't have much of it. This has already been seen in countless games that ditch 2D character art in favor of shitty 3D models in order to cut costs, such as, for example, Zero Escape 2. But Danganronpa? No. I dunno how they did it but the art in this game? Very nice style and very good quality. Just great stuff all around. Same deal with the music, I don't know who made it but it's also really good. Special mention must go to New World Order. That song starts playing and you immediately know that some crazy mysterious shit of great magnitude is going down. That's just how it is. In fact, that song is probably a little too good for the use that it gets in the game, as it's used in a few places where the current situation isn't quite dramatic enough to have such an epic song playing. But whatever, I'll let it slide this time. Another mention must also go to the Closing Argument song during court trials, which is actually just a remix of New World Order but suitably more somber and lower key to accentuate the victory that comes with finally getting a clear picture of how the murder unfolded while at the same time cementing the tragedy, the sorrow and despair of becoming one with a friend's final moments, with no way to help or change the finality of their death.

The gameplay is divided into several phases: usually at the start of a chapter there's an exploration phase where you search around the school, then there's a few days of "free time" where you can choose which characters to spend time with in order to build your relationship which leads to scenes and events involving them as well as unlocking special skills to be used at the trials. Here you can also choose to give them presents, and it can be fun to try and figure out which presents they love the most based on their personality and what you know of them. Further, as the story unfolds and you learn new things about them it can put certain reactions that they had to presents which didn't make much sense before in a whole different light. Of course, though I do really like this aspect of the game, it being a murder mystery similar to Zero Escape sort of makes it a double-edged sword because then it's that much worse when the inevitable happens. Once that happens you move to the investigation phase where you search for clues to help you piece together how the murder happened. Then finally you move on to the trial phase where you explain everything. Therein lies a big difference in the tone of this game compared to Zero Escape. The circumstances surrounding murders are always less mysterious in this game because the investigation and trial phases quickly answer all the questions, whereas in Zero Escape they might not be explained until much later. Basically, the murder is usually "solved" in the same chapter. The kind of disconcerting thing is that oftentimes the clues you find point to a really obvious conclusion but the main character acts like he doesn't know what it means just because the game is waiting until the trial phase to make you spell it out. I mean, I know he's supposed to be a talentless average Joe but come on, this is some pretty below average shit if you ask me. Still, even though the main picture usually becomes obvious too soon there's usually some unexpected aspect or twist thrown in there that mixes things up.

For the final phase, the court trials, it mostly works very similarly to Ace Attorney: you get a piece of evidence and you use it on a statement to find a contradiction. However, I feel like this game adds a lot of gimmicky gameplay elements, like they went "Oh man you guys, this is supposed to be a game, we gotsta add some gamey stuff in there!" The closing argument, where you have to re-enact the sequence of events by filling in the missing parts in a comic style format, that's good. That's cool. But the Hangman's Gambit which is literally just a round of Hangman where you have to guess a word related to the case by picking the right letters in order, and the Bullet Time Battle where you have to press a button in sync with the beat like a rhythm game just seem like out of place fluff. There's not much there. The school you're trapped in is fully explorable (more areas become unlocked as you progress), which is surprising for this sort of game but very nice because it makes searching and uncovering the mysteries of the place more engaging. Plus, it's always fun to walk around trying to find people and think about where in the facility a certain character may be hiding and what, if anything, they might be doing. Also, I love how every new chapter the main character's internal monologue whenever you inspect something changes, so even if you had already checked something before, you can look at it again and not get the same old line as last time.

At their introduction, I felt like 15 characters was too much. I mean, fifteen? How am I supposed to keep track of all these niggas? But due to the nature of the game those numbers get culled really damn fast, and the truth is, by the end I had no problem remembering them all because the game does a really good job of developing almost all of them. Even some characters who may not seem like much end up having hidden depths later, making them more interesting.

Aside from that, the story is also good, which, being a visual novel, it better be. I wouldn't say that it's quite AS good as in Zero Escape, but hey, I can't help but feel that ZE2 stole a few ideas from this game. Another reason why it doesn't feel as good is because it doesn't have ZE's revolutionary replayability and branching paths. Once someone dies in this game that's IT. You can't do anything to avoid it or to change it the way you could in ZE, which ends up making the game feel really fucking depressing after a while. I was actually secretly hoping the entire time that there would be some way to go back in time and change events or something along those lines but no dice. The game does tease you with the possibility as a joke only to then crush it, so there's that. Yeah. As I said, it also has no branching paths. All of the choices presented to you are fake. There's like a couple that give you a quick fake ending before putting you back in the choice again and then the rest just keep repeating the question over and over until you pick the right "choice". Yeah, I know. The story in this game is some pretty bleak shit. Depressing. However... there's a small consolation. After you beat the game you unlock a bonus "what if" mode. Specifically: what if the main antagonist, Monokuma, instead of being an evil murderous fucking prick had been an evil relatively harmless fucking prick. In this mode, instead of having you kill each other he has you build him class projects throughout 50 days. It's a pretty fun little mode which has you micromanaging all of the characters to have them scavenge for materials around the school and construct things with them while keeping an eye on their energy levels and the cleanliness of the school. It feels more like a game than the actual main game, and in between all this you get free time to spend with any of the characters. In this mode none of the characters die so if you missed events with some of them in the main game (which you will), this is your chance to get 'em all. But that's not even all, they also saw fit to add even more by allowing you to use all new "trip tickets" which you get as rewards from completing the class projects to take a character on a date around different parts of school, complete with all new dialogue and everything. As you spend time with them in this way you build up your relationship with them and eventually get a new scene and, if you max them out, you get a special ending with them when you finish. It's honestly surprisingly good for a bonus mode and adds a lot to the game. I can feel the love put into it.

There are barely any good games on the Vita, but this is one of them. Get this fucking game. It can get depressing but it's worth it, and besides, the bonus mode made me feel a little better afterwards anyway.