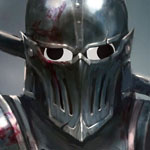 Want some thoughts? No? Well I dunno, fuck off then?

So I was one of the bajillions who got into the For Honor beta this past weekend, and I've been churning a bunch of thoughts around in my mind about it ever since. Figured it might be good to put them into words. So here t'is.

For Honor has an interesting concept. It takes the basic rock/paper/scissors nature of traditional 2D fighting games, and attempts to put it into a 3D space, while maintaining the grounded fundamentals present in a one-on-one duel. I think they're onto something, and overall it feels good, and I believe it's on the right track. It's not quite there yet, but it's going in the right direction.

I'm going to be talking almost exclusively about the combat, because that's the defining feature of For Honor and basically the only thing about it that really sets it apart from other third person action games. In most action games, you can feel a little disconnected from the physical actions of your character. Pressing X to swing a sword, for instance, may not necessarily feel particularly intense or involved. So For Honor does something pretty different. Ubisoft calls it the "Art of Battle" - long story short, you primarily utilize the right stick to determine the direction of your attack or block. You can go left, right, or up. When you attack, your opponent gets a brief moment to react and has to point their stick in the same direction in order to block.

Of course, it gets quite a bit deeper than that. You have light attacks and heavy attacks, you can parry in addition to blocking, and there is also a guard break (effectively a throw, in fighting game terminology.) There are also dodges, which can be done in any direction and allow a brief moment of invulnerability (but you still have to read the attack and dodge the right way, or you'll just dodge directly into a sword and get hit) and unblockable attacks (which can be countered by parrying, dodging, or guard breaking, depending on the attack and your timing.) There's also the option to feint an attack to trick your opponent into doing the wrong thing and giving you an opening.

Essentially, there's an answer to everything - rock/paper/scissors, the way any balanced game needs to be. You need to invest some time into the combat to the point where your reactions and knowledge allow you to be prepared to use the appropriate counter at the appropriate time.

So that's the gist of the combat. For Honor also has a bunch of different classes, or characters, to choose from. There's three factions - Vikings, Knights, and Samurai, each of which has four classes, which all look different, have different weapons, and some different moves/abilities. Right now, the classes are where my biggest criticisms of the game lie. The overall combat is solid, but the classes create issues of balance (certain classes have distinct advantages over the rest of the cast.) A lot of people complained about the Nobushi, a Samurai class whose weapon allows for very long range pokes, effectively playing a long-range keep-away game. Obviously that playstyle can be annoying to deal with if you lack the necessary experience and skillset. I don't think the Nobushi itself is overpowered as such, but I do think there are problems with one thing the class can do - cause Bleed damage.

Both the Nobushi and a knight class called Peacekeeper have the ability to cause Bleed damage - a damage-over-time effect. Think Poison, or whatever. Same deal. The effect itself is pretty strong in its current form, and VERY annoying to be on the receiving end of. I think it'll get tweaked, probably to deal slightly less damage. A lot of players were saying that Bleed itself shouldn't be able to kill (i.e. if you're bleeding you should keep 1hp and not straight up die from it) but I don't know if that's the best answer. Bleeding gives a sense of urgency to a fight - there were plenty of times when I was bleeding, doomed to die, and rather than sitting and waiting to bleed to death I got aggressive and killed my opponent before the bleed could finish me off. That was actually fun, and intensely satisfying. Killing someone who thinks your loss is guaranteed is a feeling that can't be beat. But of course, losing to somebody who just causes Bleed and then runs away from you causes massive salt. The runaway game is pretty strong in For Honor, and very frustrating. It isn't always easy to stop somebody from simply running away.

Anyway, the Bleed effect itself isn't really my big concern. My concern is that only the Nobushi and Peacekeeper have the ability. The other classes don't really have an equivalent. That means that only those two classes have an ability to make them truly feel unique, by allowing them to alter the flow of a fight. When the threat of Bleed is there, a fight becomes very different. When Bleed is inflicted, the fight changes again. Desperation can set in and they could rally, or frustration can get the better of them causing them to make a mistake, and so on. For the other characters, each fight is basically the same, and it doesn't matter who you're playing as. I'd love to see the other classes get some status effects of their own - maybe the Viking classes could get more abilities to stun or perhaps "intimidate" their opponents in some way, and maybe the knights could get some defensive abilities relating to the heavy armor they wear.

I don't know. I'm not a game designer. But I know what feels good to me, and after having played several different classes throughout the beta, I came away feeling like most of them weren't all that different from one another. For instance, I loved the Viking Raider, but he couldn't do anything that other classes couldn't. His only unique ability is to grab people and carry them a short distance, but in terms of what that actually achieves it's no different than a guard break for the other classes. Everybody can guard break and shove someone, which is effectively what the Raider's carry mechanic does. It just grabs somebody and pushes them in a direction. The end result is no different. So why play the Raider, when I could instead play the Kensei, or vice versa?

I also think the game favors defense. Once you learn what to watch for you can have an almost iron-clad defense, blocking or parrying every attack and teching every throw attempt. It takes effort and concentration and practice, but at a "high level" (if there is such a thing in a game that isn't even out yet) you can definitely be near-impenetrable. You need to be really good at mixing in feints to really open somebody up and sneak a hit in. Honestly, I don't think this is a large issue, and will evolve and change over time as people learn the game to deeper levels.

I guess I'll talk about the unimportant shit real quick: Looks good, sounds good. Sounds great, actually. The sound effects are really brutal, and it adds to the impact of each hit and block. I enjoy the personal touches that character customization allows, so that's neat. The UI is a little janky and could use some work. It's a little clumsy, slow, and not particularly intuitive. Also for whatever reason you have to hold the confirm button for almost everything instead of just a simple tap. I could get on board with this for important notifications, and MAYBE readying up during matchmaking, but you have to hold the button down for almost everything, which is kinda annoying. That's a really minor nitpick that I don't actually care much about, though.

Anyway, that's it. My initial thoughts on what should be a fairly decent game that's trying something that I think is neat. Great concept, mostly solid execution, maybe some issues when it comes to staying power. It's pushing to be an "esport" level of competitive game, but with the lack of variety in play styles I see it becoming a turtle-heavy game right now, which isn't really exciting to spectate. But I do anticipate lots of gradual change over time, hopefully for the better.

Just for fun, here's a clip of me being a total dick as Raider: