Bayonetta makes me feel dirty. That shameful kind of dirty that comes from the objectification of women. Even the name of the demo gives off that kind of creepy pervert vibe; despite being admittedly clever, if not unexpected, with its subtitling in relation to the overtly sexualised nature of Bayonetta - and the world in which the game takes place.

The premise of the game is a simple one: Have the original creator of Devil May Cry remake Devil May Cry, except with Sarah Palin wearing a leather catsuit. And with guns for the heals of her shoe. It really feels like it's treading the same old familiar ground of Devil May Cry, yet somehow it feels more stylish. With the demo at least there appears to be less emphasis on DMC's gloomy atmosphere and rock soundtrack - everything feels more up beat, thanks in part I'm sure to the somewhat addictive j-popish soundtrack. 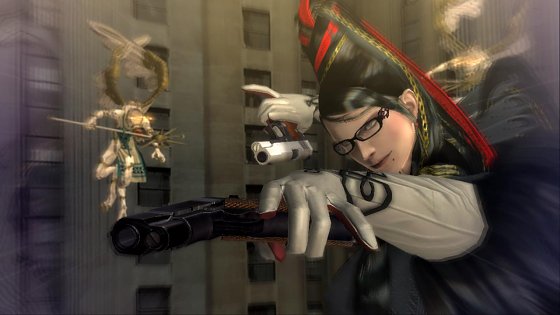 While games like Ninja Gaiden and Devil May Cry often required a lot of practice and memorisation to get the right set of combos, blocks and dodges down; Bayonetta somehow manages to make it feel easier. Not the game itself (though anything is easier than Ninja Gaiden), but the ease of which you can perform a stylish looking and effective combo, often resulting in the creation of an apparition or construct built from Bayonetta's own hair in a ludicrous display of satisfying violence that leaves her standing around naked. It really speaks for the depth of the combat when you can string together such a combo by practically mindlessly alternating between punches, kicks and REAL TIME WEAPON CHANGING on the fly. Except obviously real time weapon changing isn't actually anything worth talking about, Genji.

Despite rumours flying around this past few months that the framerate on the PS3 version of the game were sloppy and inconsistent, that all seems to have been ironed out at this point, as I had no issues of that nature. Bayonetta is looking up to be a promising third person action game, and it's going to be a terrible shame if it's buried under the hype for Dante's Inferno and God of War III this coming post-holiday release rush. Really the only complaint I can muster is that the demo is really quite good. If you're going to make a game as gratuitous as this, you could at least have the common decency to make it mediocre, so that people outside of frat houses don't want to play it for fear of being caught in the act. Like Rumble Roses.