Several reasons why Twilight Princess is the worst Zelda game 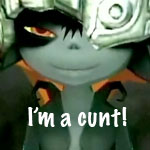 I think that Twilight Princess is by far the weakest of all the Zelda games. I've summed up some of my primary reasons why below.

Navi probably drove you crazy in Ocarina of Time because she wouldn't shut up with her "HEY. LINK. LISTEN. WATCH OUT.", but then Majora's Mask came along and you met Tatl. Tatl was an insufferable BITCH compared to Navi. Navi made annoying noises, which thankfully Tatl did not, but at least Navi was nice to you and realized Link was Hyrule's only hope for salvation and she gave you encouragement. Tatl, however, bitched and moaned about every little thing and ridiculed you constantly.

Oh, but she was nothing compared to Midna. Midna is the main bitch in all the land. Not only does Midna insult you constantly, but she teases you, and laughs at you, and actually forces you to be her slave, and only helps you if it benefits her. And she's a hideous little goblin creature that gets all touchy-feely with you. It's disturbing, and I absolutely despise her. I hope never to see her in a Zelda game ever again, and if she appears in one, I will not play it.

And at least Navi's annoying noises meant that she had some information for you - Midna just fucking yawns at you for no reason all the time, and her voice is really grating.

Since playing Twilight Princess and Majora's Mask, I've replayed Ocarina of Time quite a lot, and I now actually really like Navi. That is what Tatl and Midna will do to you.

I don't know whose idea it was to include this wolf gimmick, but it sickens me to know that not only were they not fired, but their bosses actually USED the idea, and the person probably got a pay rise as a result of it.

It's not even a good gimmick. It's a chore gimmick. It's a gimmick that detracts from the real fun of the game and makes you fuck around in stupid, crappy twilight world as a wolf when you know you could be back in normal world as a badass human killing things with a sword and a bow and bombs and stuff.

Of course, the worst part of being wolf Link is that you have to deal with Midna fucking RIDING YOU AROUND.

3. The first few hours of the game

The first half hour starts out alright. Maybe a little boring compared to OoT's first half hour, but at least you seem to be going somewhere. You herd a few goats, you learn to ride Epona, you get a wooden sword and save a kid from some moblins… and then you're a wolf for a couple of hours and every second of it sucks. You meet Midna and she's an enormous cunt. There's no end to being a wolf in sight and Midna doesn't utter a single positive word and you're left bored, desperately hoping that the game will soon improve. Eventually, it does, but then you play the rest of the game dreading the next wolf section because it will only bring back those feelings of loathing and boredom.

As a side note, the Gamecube version is so, so much better than the Wii version. The controls are still bad (for god's sake, why didn't they just use the exact same controls as the Gamecube version of OoT? Those were perfect. Hell, even the pause menu was better in OoT) but they're still far better than waving the stupid wii remote around like an idiot. Not only that, but the world is the correct way around, rather than the wii version's ass-backwards mirror world. Seriously, Nintendo were utterly retarded mirroring the entire world. If they wanted it to feel more comfortable for right-handed players, just mirror Link and maybe the enemy models too, and leave the fucking world as is. At least that way Kakariko Village and Lake Hylia would be on the correct sides. But nooo, you just had to ruin it for everybody. Dicks.